Matt Elliott’s rise as a top football pundit is inextricably linked with the fortunes of his former club Leicester City. His deep baritone voice, self-deprecating sense of humour and his incisive dissecting of the game made him a natural on radio.

As a player Elliott’s first brush with the media, other than addressing press conferences as a player and captain, was being part of a Sky Sport t.v panel when City were in the semi- finals of the League Cup against Wimbledon in 1997. He was cup-tied having just moved to City and describes it as an experience: “I was suddenly in front of the cameras, having never been on a live television programme before and it was certainly an eye opener, to say the least, but I enjoyed it.” 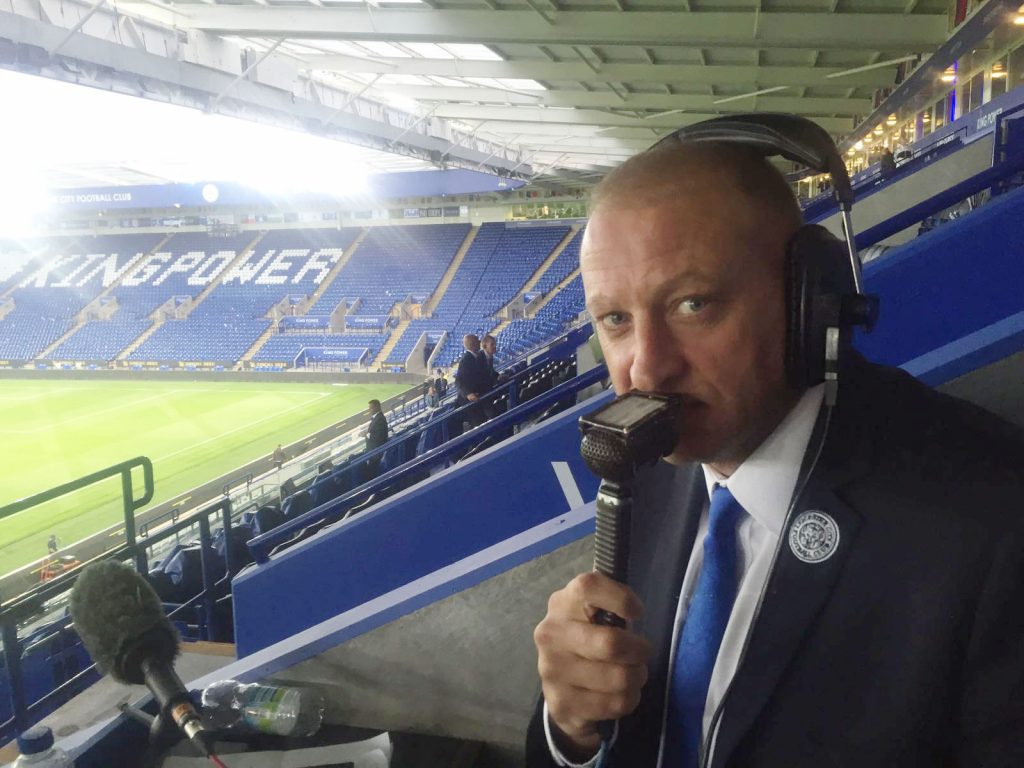 After his playing career ended Elliott went into coaching, first with a couple of non-league sides, then in 2014 he moved abroad to take charge of Army United, in the Thailand Premier League, a club which had an affiliation with Leicester City.

On his return later that year, he received a call out of the blue from former teammate Gerry Taggart: “Gerry had been doing a bit of work with BBC Radio Leicester but got a different opportunity and my name was mentioned.”

Elliott shares his experience from a player and coach, to summariser at the start of 2014/2015 season: “My first full game as a co-commentator on BBC Radio Leicester was a pre-season friendly and things happened pretty quickly after that. I hadn’t received any formal media training coming into the fray, but Ian (Stringer) and Jason (Bourne) were great with teaching me the basics about timings and when to speak and when not to! It wasn’t exactly a baptism of fire but you had to learn on your feet.”

Early on he was apprehensive and wary of not wanting to upset people, so was more inclined to be diplomatic because of his links with the club and knowing some of the players involved, as well as the manager at the time, Nigel Pearson. He soon started to enjoy being behind the mic, as he became more involved and comfortable in the role.

The Foxes started the 2015/2016 season as most peoples’ favourites for relegation, remember they were 5000-1 outsiders to win the Premier League title. They had just survived being relegated the season before under Pearson, and the appointment of Claudio Ranieri as their new manager didn’t exactly inspire much confidence. After all, the Italian had just been sacked as coach of the national Greek side, after they suffered a humiliating defeat to the Faroe Islands and failed to qualify for the European Championships.

Elliott, by now a regular on BBC Radio Leicester’s football commentaries, was amongst those who had doubts about Ranieri: “I must admit it came from left field. Ranieri wasn’t one of the managers being mentioned, but all of a sudden he popped up. He’s been around the block with highs and lows but to do what he’s done in such a short period of time, there’s obviously something about him.”

As City’s fortunes improved, so did the work coming Elliott’s way on both radio on t.v: “At the start of the season it was match days, doing the Football Forum on Monday nights on BBC Radio Leicester and the odd interview, but all of a sudden the interest became worldwide and with that my involvement developed as well. I was getting calls from untold radio stations, newspapers, t.v networks, and calls from Malaysia, Australia, America and right across Europe.”

Elliott’s affiliation with the club dates back 19 years, so he was jubilant to see them win the Premier League: “It was amazing to be involved in it. I timed it just right, even the season before was pretty eventful with the great escape. To witness what went on, away from the pitch as well, with the celebrations of the supporters across the whole county and to see the team develop from relegation favourites to title winners was something special, and something you won’t forget quickly.”

BBC Radio Leicester’s Ian Stringer, Elliott’s usual partner in the commentary box says: “Matt is a consummate professional. We’re very fortunate to have him with us because he’s not only lifted trophies for the club that he reports on, he’s captained them and played in the Premier League with them. He’s an intelligent football guy and is a pleasure to work with.” Ian also gives an insight into what Elliott’s like off the field, so to speak: “He eats too much, he loves crisps and provides entertaining car journeys to and from grounds. He’s got an incredible memory so you have to be careful about dropping bloopers on the air, because he’ll remember and bring them back up.”

Elliott admits he enjoys the media work more than coaching, and it’s something he’d like to do more off in the future: “I’m more orientated to the media side these days, if opportunities continue to come my way. Speaking about something you enjoy watching, at a club you’ve been involved with for 19 years, in an area you’ve lived in for 19 and a half years is not really most people’s consideration of work.”

With Leicester City defending their Premier League crown and also featuring for the first time in the UEFA Champion’s League, Elliott should find plenty of media work coming his way this season.