British Historian, Nicola Tallis speaks about the idea and extensive research behind her first non-fiction biography, Crown of Blood: The Deadly Inheritance of Lady Jane Grey.

Born in Leicestershire in 1537, English noblewoman Lady Jane Grey is known in British History as the “Nine-Day Queen.” After a short-lived reign, she was convicted of high treason and sentenced to death at the age of 17.

Holding a first class degree in History, an MA in Public History and currently working towards a PhD, Nicola Tallis has been fortunate enough to have had a varied career within history and heritage. Aside from writing, she has worked as a curator, lecturer and researcher, as well as being the current resident historian for Alison Weir Tours. 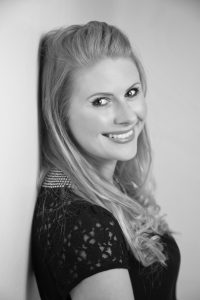 Nicola’s real love of history began as a child, where she was read bedtime stories about King Arthur and the Six Wives of Henry VIII.  Growing a fondness for Tudor history, it was at the age of 12 that Nicola developed a keen interest in Lady Jane Grey: “My pen-pal gave me a copy of Alison Plowden’s biography of Jane for my birthday, and I watched Trevor Nunn’s film, Lady Jane. That really struck a chord with me, and I remember thinking that she was somebody I’d like to find out more about in the future.”

Prior to starting Crown of Blood: The Deadly Inheritance of Lady Jane Grey, Nicola initially set out to write about Jane’s mother, Lady Frances Brandon: “Inevitably lots of the source material also referred to Jane, and as I delved deeper I realised that there was more to Jane than meets the eye and that she was worthy of a fresh appraisal.”

Many historians have written about Lady Jane Grey over the years, focusing mainly on the political context of her time. Nicola’s aim for the book was to explore Jane as an individual and highlight the human aspects of her character. Applying the all-important historical facts, she also wanted to create a story that her readers could follow.

The book is a result of five year’s work, including the writing on Jane’s mother: “I always start with the primary sources, which can take a lot of planning depending on where they’re located. Some sources are available online and in print, such as the contemporary chronicles, but many of the sources I consulted were in manuscript form, which requires more planning.”

During her research, Nicola had visited a number archives. She gained access to artefacts including a handwritten letter by Jane, as well as a Jewel inventory and proclamations that she’d issued during her short reign. These primary sources form the essential core of the book and are what bring Jane’s character to life: “It’s always a privilege to be able to handle original documents. It gives me a real connection with my subject. I was able to immerse myself into Jane’s world.”

Retracing Jane’s footsteps, Nicola travelled to various locations connected to her life: “I visited Bradgate Park on several occasions- this was an integral part of the project. The landscape is largely unchanged since the sixteenth century. This certainly helped with my writing, as it was easy to visualise what it would have looked like in Jane’s day.”

Having studied her letters closely, Nicola discovered new insights into Jane and her family and learnt that she had in fact ruled for thirteen days, from the 6-19 July 1553, but wasn’t publicly proclaimed until July 10. Nicola also uncovered just how fervent Jane was about her protestant faith and found that her father, Henry Grey, Duke of Suffolk was also a great advocate: “It’s often said that very few sources for Jane’s life survive, but actually if you look in the right places there’s still a lot there. Inevitably there are gaps, and some areas of Jane’s life may always remain shrouded in mystery, but I was surprised to discover that enough remains to build up a reasonable picture of her.”

Through extensive research, Nicola has unlocked various truths surrounding the many myths. Without giving too much away, she soon discovered that there was more to Jane than just a teenage girl who was cruelly manipulated in the world of sixteenth-century politics. Jane knew her own mind and wasn’t afraid to voice her opinion.

After seizing the crown, Mary I had every intention of sparing her second cousin’s life, but due to Jane’s father becoming embroiled in the Wyatt Rebellion, decisions promptly changed. As the youngest royal women condemned to treason, Nicola shares how Jane would have perhaps composed herself knowing her fate: “I think she believed that Mary would have remained true to her initial inclination to spare her life.

It was when Jane was made aware that her execution was imminent, however, that she became a mistress of her own life. She believed in immortality, and that her soul would live on after death.  This undoubtedly gave her a great deal of strength and comfort.” 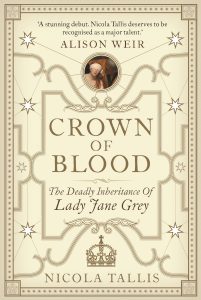 With an array of information and sources available on Lady Jane Grey, Nicola shares what sets her book apart: “When you’re writing about people from the past it’s so easy to forget that, that was the case and that they existed on more than the pages of books and the documents that you’re studying. I wanted to drive home the emotional aspects of Jane’s story, but also to demonstrate that she deserves to be remembered as far more than one of history’s tragic victims.”

Crown of Blood: The Deadly Inheritance of Lady Jane Grey by Nicola Tallis is out now in hardback, priced £20.00 (Michael O’Mara Books)