Adam Hames, a 16-year-old Loughborough boy with a dream, is set to have it made as he travels the ice this winter to compete and qualify for the Mono-bob competition at the Youth Winter Olympic Games 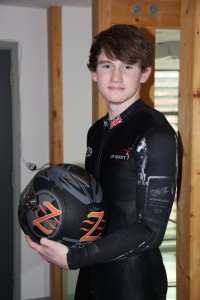 His selection within the GB Bobsleigh team was confirmed in the final weeks of October 2015 when he returned from an intense training week in Lillehammer. In order for Adam to progress and qualify to compete within the Youth Olympic Games he has to finish within the top 14 in the world at the end of this season’s competitions, but Adam isn’t too worried about that as after finishing sixth in the world rankings at the end of last years season it put him in great stead leading into Calgary, Canada in November. When asked about his thoughts as he steps into the competitive winter Adam said, “I’m proud of my recent improvements physically, I have put on 6kg within the space of three months and when I first joined I was racing 4.10 for 30m and now I’m clocking 3.88, I’m feeling very strong and am extremely excited.”

Qualifying began in Canada where each individual had two races resulting in two placing results. In Canada, Adam began the season with 3rd and 7th. Following Canada the team headed to Austria where after a difficult two races Adam placed 9th and 16th. Next was Lillehammer in December where Adam came 4th in both races meaning he was heading home for Christmas with a comfortable 5th place position in the world rankings ahead of St Moritz in the New Year. Adam along with fellow team mates Ed Himbury, George Johnston, Ben Lynch, Annabel Chaffey, Aimee Davey and Kelsea Purchall have all had to endure months of intense competition in order to be selected and this continues right up until the Games in order for them to gain a place within the most prestigious youth bobsleigh event of the year. After a successful few qualifying races the team are looking in strong suit.

Born and raised in Loughborough, the 16 year-old has been a sports enthusiast from a young age. Bobsleigh crept into Adam’s life rather unexpectedly and it was whilst the Hames’ were tuning in to family friend and singer Sally Barker on the radio back in 2014 that Adam heard trials were being held for team GB at Loughborough University. “A friend and I went along and we looked very out of place, I was in baggy shorts, a baggy top, and old trainers whilst everyone else was in lycra. However, this didn’t seem to affect me as I progressed rather rapidly through the phases. It all took off very quickly and after I trialled towards the end of that summer it got confirmed in September that I was in the GB team – crazy!” 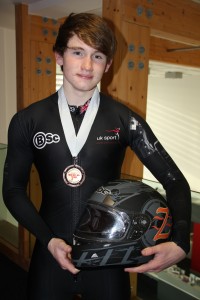 Since starting his bobsleigh journey in September 2014, Adam immediately rocketed into the top 10 in the world for his age group and within his first race alone took the biggest win of his career to date. “My first race brought with it my first medal in Bobsleigh and I couldn’t have been happier and more shocked that I finished second, who would have thought!”

Bobsleigh was not the only medal winning sport for Adam that winter as he became European Wado-Kai Karate Champion for his age group. Adam began Martial Arts at the age of four and since has been awarded 12 British titles alongside his European Champion belt. It was not until after the winter season of 2014/15 that the talented fighter had to hang up his competing belts to make way for his bounding bobsleigh career, a decision that was hard for the young athlete but one that he felt had to be made. “I do miss competing in Karate, and of course I was extremely disappointed that I could not defend my European title in Hungary in November but it was just too risky to face an opportunity to get injured. I’m still training however and I will continue to do so as the high intensity plyometrics accentuates my bobsleigh training and I still get to hold on to a sport that I love ”

Adam is currently studying his A-levels at Rawlins Academy in Quorn. He says that the Academy have been extremely supportive of his sporting commitments especially with taking these next few months out of his education for the sport. One way in which he says he will aim to keep on top of his studies is by skyping his teachers whilst he is away – that is 21st century education right there!

Away from the intensity of his training and competitive lifestyle, Adam enjoys fuelling his passion for music whilst embracing the benefits of living in a successful sporting society, “I like hard core punk music, I go to a lot of gigs in Leicester and I also play the drums!” – a boy of many talents it seems. “I’m always proud to say I’m from Leicester due to its creditable sporting successes that come out of the county, I’ve grown up surrounded by these inspirational people.”

Alongside his admiration for local sporting idols, Adam’s bobsleigh inspirational figure is pilot John Jackson. “Since beginning my descent into bobsleigh ‘Jacko’ has been an idol of mine. He has been in the sport for so many years, but one moment in his career I will always remember him for was when he ruptured his achilles tendon seven months prior to the Sochi Olympics and yet still managed to get back fit and compete, that takes guts!”

Behind every successful athlete is a supportive structure, and Adam certainly has that! He said, “I am extremely grateful for everything big and small that both my mum and dad do for me. I also have to recognise the help of others to get me where I am today. Firstly I would like to thank Joe Humphries Memorial Trust for my inspire award which has helped me greatly financially to enable me to complete my training, secondly to Sports Aid who have helped fund the team throughout the whole youth programme, thirdly to Dave Hall School of Driving, and last but not least Blazewear who have provided me with top of the range heated clothing for this season.” 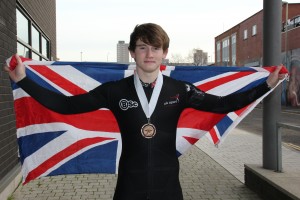