Pukaar Magazine’s Sam Ellison spoke to Sgt. Brandon Perry about his life as a police officer in South Carolina, and what it’s like to teach budding policing students at De Montfort University.

Multiculturalism has always been a virtuous pillar in the story of Leicester city. Migrants and asylum seekers have made the city their home for many years, bringing along with them rich cultural backgrounds and prosperity. The incredibly diverse population of Leicester is sprinkled with so many unexpected cultures and stories, one of which I am telling here. 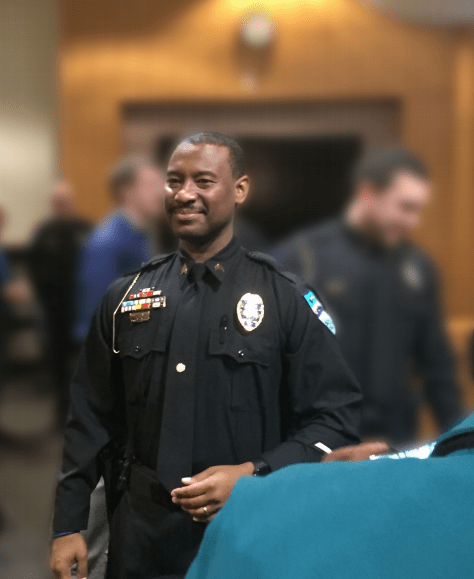 It’s always interesting to discover how life in the UK is perceived by newcomers, be they just visiting or looking for a new home. Brandon Perry, a police sergeant from Durham in North Carolina moved to the UK in 2018 with his Wife Kennetta and their daughter. “My wife got head-hunted to be the director of the Stephen Lawrence Research Centre at De Montfort University.” said Brandon. “She was short-listed by DMU and they asked her to apply for the role. They flew her to NYC for a few interviews, she met Baroness Lawrence at the UN, and then interviewed for the role over in the States.”

Following these interviews, their family was flown over to Leicester to see how they would find living here. “Honestly, I had never heard of Leicester! But it’s great! I remember typing Leicester into YouTube and, I ain’t gonna lie, whoever made those clips, they are amazing. We saw lots of videos about the city, probably made by the council if I remember rightly. It really hyped us up for the trip.”

For this journey though, Brandon had to make a huge sacrifice. “My wife and I talked about this job a lot. It was a great opportunity for her, and she has stayed in place for my career for all those years. It was only fair that I give her the time to grow her career too.”

Leaving behind a profession that has defined so much of your life is a big decision to make. He may not currently wear the badge, but Brandon is a cop, through and through. When asked if he misses that life, his reply was not unexpected. “Oh gosh yeah. Brother, I miss it. I was a cop for 18 years. Technically, I still am a cop. I still have my certifications but obviously I’m not serving whilst I’m over here! It’s in my blood though, ya know? 18 years is a long time and you can’t just turn that off. I have a lifetime of experiences as a police sergeant in the USA, from undercover work, investigations, training new officers, and I’ve worked with just about every 3-letter agency you can name!

“When I first got here, it was very hard to find a job. Most roles require you to be in the country for some time, and have some form of residency. Eventually I managed to get all the relevant documentation and rights to work in the UK after searching for a career for about half a year. I then ended up getting a job with DMU local. 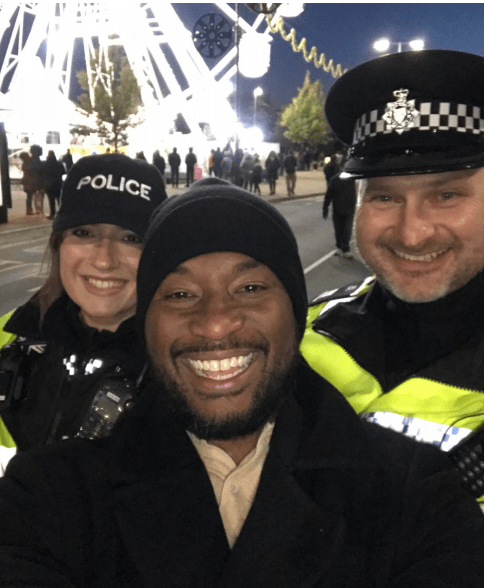 “This actually helped me to learn more about the city itself through my work. I was helping refugees and asylum seekers get settled into their new place in this country. I was new to the UK and it was interesting to help other people learn more about the place whilst still learning myself. Much of the information was fresh in my mind, so it was an easy task to show off the great things about Leicester to other new arrivals, and to show them the same kindness and warm welcome that I received!”

During Brandon’s time working at DMU, his natural charisma and friendly demeanour led him, by happenstance, to the DMU policing team. “I love having conversations with everyone, making small-talk, getting to know new people around the campus, for example. And I happened to one day start talking to a couple of people from the policing team. I told them all about my time as a cop in the States and they asked whether I’d thought about teaching. We met for lunch one day and they told me all about some openings they had on the team and that I should apply. I applied and I got the job! I teach first year policing and criminal investigation students. I’m the first teacher they get – I get them introduced to the policing system and what it’s like to be a police constable and investigator.

“It’s been so fun and amazing learning everything about the legal system in the UK and teaching my students all about the life of police officers in the USA compared to the UK. Interestingly, there aren’t many differences! I honestly don’t think I’m going to return to policing now. I’ve really got a taste for teaching and I get to talk all about my own experiences and memories over the last 18 years.”

Shine on stage with Curve