Multi-talented sports star Tyrese Johnson-Fisher talks to James Knuckey about heading Stateside and embracing an opportunity that only comes around once in a lifetime. 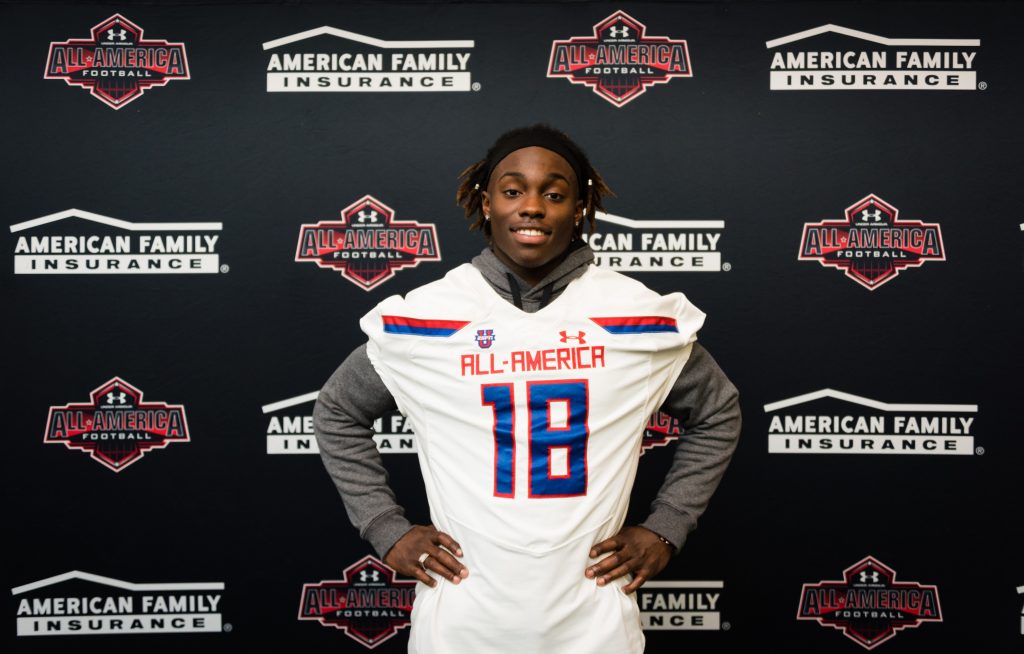 Athletic fans will already know the name Tyrese Johnson-Fisher. At the age of 14, this teenager was one of the fastest sprinters for his age, running 100 metres in 10.91 seconds.

Meanwhile, rugby fans will know him from his performance representing Oakham School in the Natwest Schools Cup Under-15 semi-final. With his sprinting pedigree he was unstoppable, scoring four incredible tries which sent his team into the final. The footage of that performance went viral and he quickly became a well-known name to rugby fans.

Originally from Croydon, South London, Tyrese lived in Dubai for three years where his mum worked as a teacher. It was there he became interested in sports, starting off in football at Al Wasl FC (once managed by all-time great, Diego Maradona) and then rugby and athletics before moving back to the UK.

At 15 though, he found himself at cross-roads following the video of him on the rugby pitch:

“Everything just kicked off and then I had to decide what I was going to do. And then there was a very, very busy and distracting few months because I had a lot of media attention and a lot of people asking me for interviews and offering me different things but at 15 it was hard to juggle everything.”

To cap things off, Tyrese got a call from the States about a scholarship to play American football. This was the first call of many more to come. He was tempted to take the offer but questioned if he was mature enough to go to another country by himself.

In January 2016, the young player walked away from the rugby field and decided to dedicate his time to the track which saw his running improve, finishing the season with a personal best of 6.89 seconds for 60 metres which he also won the national title for.

The teenager was now making a bigger name for himself on the track. He competed for Team GB juniors in Georgia, where he ran the 100 metres in 10.93 seconds.

He enjoyed the pre-season but found himself back at the Leicester Tigers academy where he had previously trained and threw himself back into rugby and finished the season as top try scorer.

Then, at 18-years-old the States came calling for him again.

Elite 200 showcase some of Europe’s most talented American footballers and after seeing the teenager’s rugby videos, they invited him to join the 2018 Under Armour All-America Game made up of the USA’s top 100 most talented high school footballers. Once again, he had a big decision to make and by October he told the Tigers thanks, but no thanks.

In December of last year, he flew to Orlando to compete in the All-America Game which took place on January 4 this year and became the first-ever non-American to compete.

It was the first and only game he’s ever played in: “It was a bit difficult because the first day I was throwing up and coming from the UK, I was trying to impress people. Things were going through my head. It was difficult but it was still a fun day.”

American footballers are recruited differently to how footballers or rugby players are in the UK. Stateside they use a ‘draft system’ whereby each 32 National Football League (NFL) sides can pick one player in every six rounds of the draft.

To be suitable for the draft, the players must firstly be of an extremely high standard and have also spent enough time in US college education to be deemed as eligible by the NFL – something Tyrese now has his eye on:

I’ve committed to Coastal Carolina University, so I’ll be enrolling in mid-July. I’ll finish off my A-levels at Oakham School and then 3-4 weeks later, I’m off to the States,” he says with a grin.

“I wouldn’t be doing this if I didn’t think I could hopefully get drafted. I just want to give it everything I’ve got so that if my moment comes, I can just grab it with both hands.”

Although he’s not as experienced as others, he hopes his experiences in rugby, athletics and soccer, as he now calls it can give him the edge.

“Rugby has given me that toughness and seeing patterns in soccer has helped. I see them in American football because when I’m seeing people run in lines, I’m seeing patterns created and it’s for the quarterback to exploit. And sprinting gives you that speed I wouldn’t have from other sports.”

Tyrese comes across more than just an exceptional athlete. He’s polite, intelligent and level-headed despite his many achievements. He tells me that he’s “a thinker” and that he sees American football as the sport he can “make it in”. The fact he’s taking this gamble speaks volumes of his character and mental strength: “I’ll miss rugby but I’m looking forward to this next journey.”

“My experience was exciting, beneficial and rewarding.”