An historic building designed by one of the city’s most well known architects was recently acquired by the National Trust and is set to be turned into a major visitor attraction. 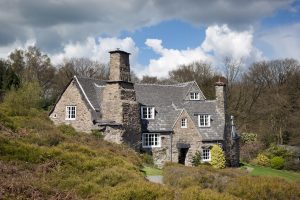 Stoneywell in Ulverscroft, Leicestershire was designed and built in 1899 by Leicester-born Ernest Gimson, who was a pioneer in the arts and crafts. The house was built for his elder brother Sydney and his wife Jeanie and has stayed within the family to the present day.

Speaking about the house, the general manager for Calke Abbey and Leicestershire, Stewart Alcock said: “It’s a place where you walk into and within minutes you just lose yourself. It’s a real adventure and your eyes are drawn to so many beautiful aspects.

“It’s also a very rare surviving, virtually intact example, of arts and crafts and architecture. Because it’s stayed in the family it is a little time capsule of arts and crafts features and really has a wonderful archive of Ernest Gimson’s original drawings as to how he was intending to design the house as well as many other stories.”

The Grade II* listed building is surrounded by four acres of gardens and set alongside eleven acres of SSSI woodland. With an informal wilderness garden it’s very reflective of the Charnwood Forest landscape character.

There is currently a £1.48m fundraising appeal for the house to cover the overall cost of the project. The house is due to open to the public in February 2014.

“Primarily it will be a family attraction, but there won’t be lots of showcases with things behind glass. It is a family home and our hope is we will portray that in such a way that visitors will feel like that have arrived, and been welcomed into a family home and taken around as if by a member of the family,” added Stewart.

While the project will involve employment of a small dedicated team for the house, there will also be the opportunity to work at Stoneywell as a volunteer. There have already been around 60 expressions of interest from local volunteers.