Warrant Officer, Balbir Singh Flora MBE is encouraging young people from BAME backgrounds to pursue a career in the Royal Air Force, to experience the amazing opportunities that the organisation has to offer.

Born in 1959 in Nairobi, Balbir was unknowingly exposed to the foundation of his future career. The not too distant Royal Air Force Base in Eastleigh, and the jets that would fly in and out of it all day, quickly became a fascination to this young boy.

He moved to the UK with his family at the age of 13, and then, at 17, he joined the Royal Air Force. After intensive training he graduated and joined the Logistics arm. Working in the technical store, he would help to provide everything the base needed, from, fuel, spares and any equipment. The logistics team kept everything ticking and without them, things would have fallen apart quite quickly. 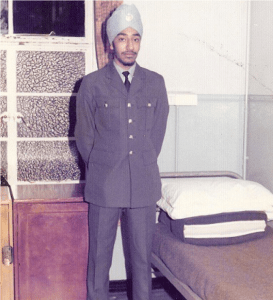 During his service, he took part in a myriad of operations abroad, from Kosovo to the Falklands. Travelling to these places, Balbir had some once-in-a-lifetime experiences.

“I was posted at a radar site in the Falklands, on top of a mountain.” Balbir said, casting his mind back. “Every now and again we would venture down to have a look at the wildlife. To walk amongst penguins and sea lions, and to see killer whales hunting was breath-taking. They would all come up fairly close as they didn’t really understand what we were, given that they had very limited exposure to humans. Seeing these animals in their natural environment was unforgettable. I did that in ‘89 when it was almost untouched.”

As an Indian Sikh, he is extremely proud to have attained the highest rank in his non- commissioned role, that of Warrant Officer.

WO Flora has received two honours for his work. One of these was an MBE for the Queen’s birthday honours list, and one was a Meritorious Service Medal for the New Year’s Honours, for his outstanding service and clean record.

He is now a full time reservist still working with the RAF. But Balbir has a new goal: to promote career opportunities to BAME, and promote gender equality within the RAF.

“I have always been loved by the RAF.” says WO Flora. “I have always worn my turban, had my beard and have been able to practice my faith. It is the same for Hindus and Muslims. For example, we have vegetarian ration packs for Hindus and halal ration packs for Muslims. People can take leave to celebrate festivals such as Vaisakhi, Diwali and Eid. The RAF, and all three military branches for that matter, are some of the most inclusive organisations you will come across.”