Being responsible for the running of Leicester Cathedral is no easy task. From attending meetings and planning special events, to attending social gatherings and more, it can be tough to juggle everything all at once. However, the Dean of Leicester, David Monteith seems to take everything in his stride.

He has been part of the Cathedral for a long time and living in the city of Leicester for the past four years. Originally from the Irish town of Enniskillen, David talks about his childhood and how growing up in a divided community (where there was conflict between Catholics and Protestants) enabled him to see how the church could help to bring unity and reconciliation to a community. 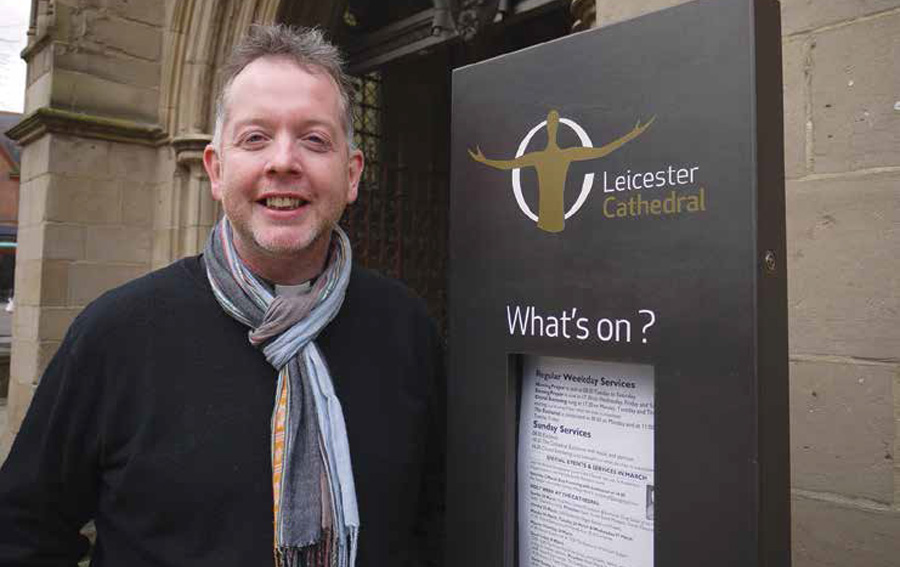 “I think cathedrals are places that can make a difference in the community.” Speaking specifically about Leicester, he said: “The cathedral is the most significant Christian building in the city and has the capacity to focus the life of all faith communities. We also try and provide a common ground space where issues of mutual care and concern for the whole community can be aired – a place where we might have lectures, talks or seminars.”

As part of his role, David believes it is his job to help people see how the world of faith and cultural imagination has shaped our identity. He does believe there is still some work to do in terms of informing and educating people about religion, especially as the building itself is from the 12th century and is almost hidden away in the centre of the city. It is of relatively modest proportions compared with the likes of Durham or York.

Typically, David’s day can start at 7.30am and finish at 9.30pm. He says: “It’s always tricky balancing work and family life but actually I’m not sure it’s necessarily about balance because balance almost implies there should be equilibrium whereas I think it’s more about doing the right thing at the right time in the right place. Yes I need time off for my home life, but I love my work so it occupies more of my time than home life I would say.”

With Easter approaching, this year is going to be particularly special as the Easter day service is going to be broadcast live on BBC1 from Leicester Cathedral. In addition to this, the following day the BBC will be recording two episodes of Songs of Praise at the premises, which will be broadcast later on in the year.

Speaking about the city, David adds: “It’s great to be in Leicester and I think we should blow our own trumpet a bit more. Not everyone knows about it. It’s a hidden gem in many ways and I think the cathedral can help the city to share its story with the country.”