Pukaar Magazine’s Deepak Patel speaks to Jayant Mistry, whose determination not to let his disability hold him back, saw him win the greatest title in tennis.

The year is 2005. The All England Tennis Club has just introduced men’s doubles wheelchair tennis at Wimbledon and Leicester-born Jayant Mistry becomes the first British man to lift a Wimbledon trophy; something that hadn’t happened since Fred Perry in 1936. 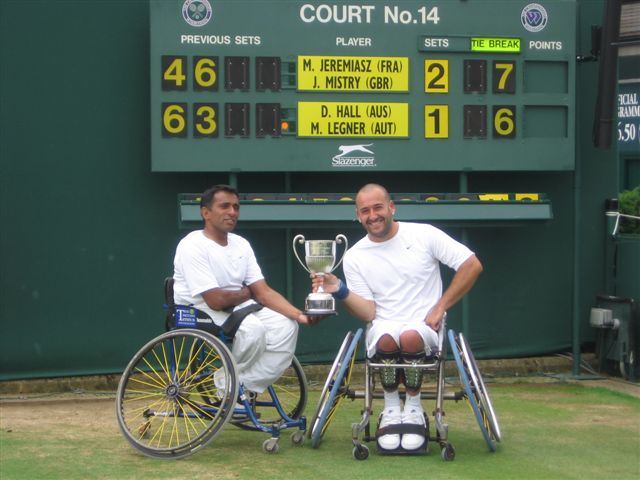 That amazing achievement sadly didn’t get the recognition it deserved because of the low profile of wheelchair tennis in those days. In a successful professional career, Jayant went on to win 68 international titles, 48 in doubles and 20 in singles. He also won a second grand slam title at the Australian Open and represented Great Britain in four Paralympics.

The end of his playing days was by no means the end of his love affair with the game. He took up administration, managed the wheelchair tennis event at the London 2012 Paralympics and went on to Rio as a coach.

Jayant was born with Spina Bifida but despite his disability, he always loved playing sport from an early age: “I attended the junior games at Stoke Mandeville where I saw other kids with disabilities, from different age groups and abilities, and it’s there that I saw wheelchair basketball, which I took up and enjoyed playing.”

When he was 19, Jayant discovered wheelchair tennis through a demonstration and thought it would be a fun sport to play in the summertime: “I played at Victoria Park all summer long, entered a couple of tournaments and the next year was back at Stoke Mandeville. That was the start and I never looked back.”

As with most Asian parents, Jayant’s family tried to push him towards what they called a ‘real job’. They thought his love of sports was only a hobby and pointed out that it couldn’t possibly be a career or make him money:

“The way I tried to sell it to my parents was to say if you look at people who play cricket – because that was their big sport – why didn’t they become doctors and lawyers themselves?”.

In between playing tennis, Jayant still had to earn a living and worked at a leisure centre and in sports development at Leicestershire County Council.

He admits that he struggled in the early days, in complete contrast to the support and help available to para-athletes these days: “When I was playing tennis, even abroad, I was still working full-time, all my holidays were taken up with playing. Then I dropped down to part-time hours, which allowed me more time to train and compete. I finally got Lottery funding in 2000, which allowed me to ditch the job and play full-time.”

The pinnacle of Jayant’s professional career remains the title he won at Wimbledon, which of course is widely regarded as the best tennis tournament in the world: “That was amazing. I played an exhibition match in 2002, but that wasn’t the same as playing in the championship.”

And with winning the title came the perks that the winners enjoy: “We [his French partner Michael Jeremiasz] went to the champion’s ball and met Roger Federer and Venus Williams who won the men’s and women’s singles titles respectively. Lifting the trophy was surreal because you see it on TV but the atmosphere is so much better in real life.”

Paralympic sport really took off at London 2012, where Jayant continued his ties with wheelchair tennis. He says: “It was amazing to be part of that in a different form. I had a dual role, working for 18 months as the wheelchair tennis manager and I was also the deputy sport manager for Olympic tennis Wimbledon, so I was involved in both the Olympics and Paralympics.” 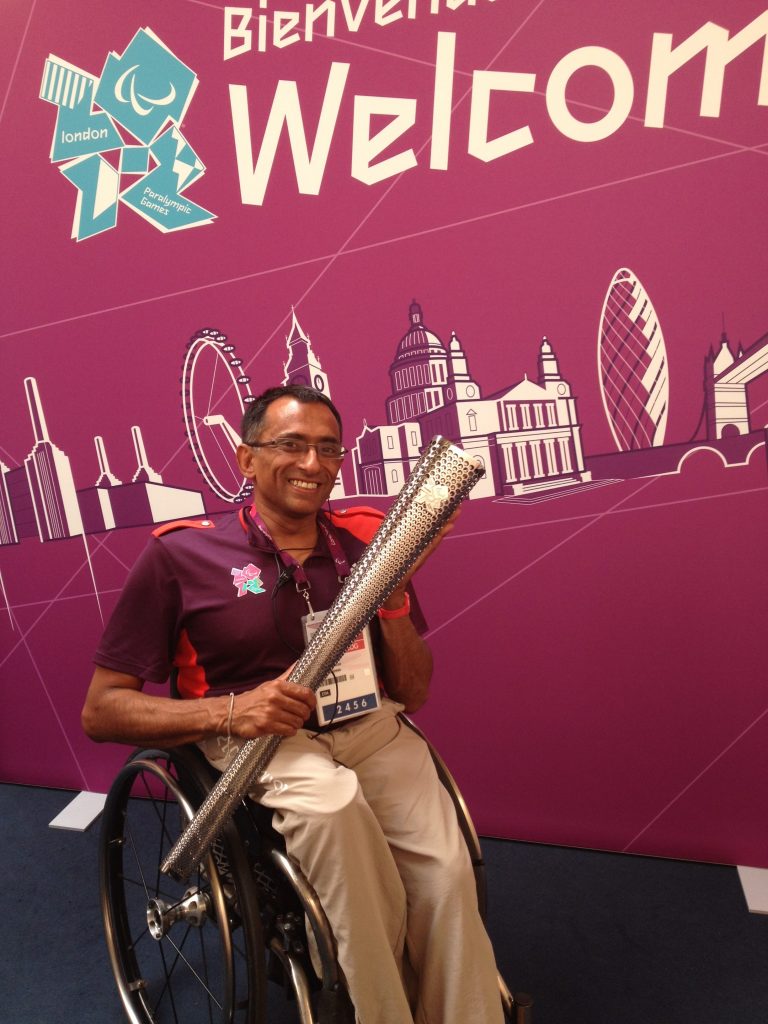 So did he miss playing at the London Paralympics? “Yeah, Gordon Reid who went on to win the gold medal in Rio in 2016 said to me, he wished we’d played doubles in London. We would have medalled. I’d retired in 2007, had an operation on my elbow in 2009 and was then offered the job to run it in 2011, so it wasn’t just the right time for me. Gordon and I would’ve had a good chance because the guys that won the gold, the Swedes, I’d never lost to them!”

Coaching was something Jayant always wanted to do after his playing days were over. He knows only too well that you can’t play forever but adds that “he had a good run at it”. With injuries to his arm and shoulder, he started looking at other things to do: “I moved back into sports development, did some consultancy work and joined the Kelly Holmes Legacy Trust down in London. I also got my coaching qualifications in basketball.”

Summing up his own career as a wheelchair tennis pro, Jayant says: “It was much better than I thought it was going to be. Everybody dreams about playing at the highest level, at the Olympics or at the grand slams, and I managed to do both. I’ve been very fortunate in that I played in the very first Paralympics in Barcelona in ’92, which was a major thing for me, going to the opening ceremony and being cheered on by 80,000 people, with all your friends and family supporting you. The very first grand slam, the Australian Open in 2000, where I won the doubles, then the first Wimbledon in 2005. That’s still for me the biggest highlight.” 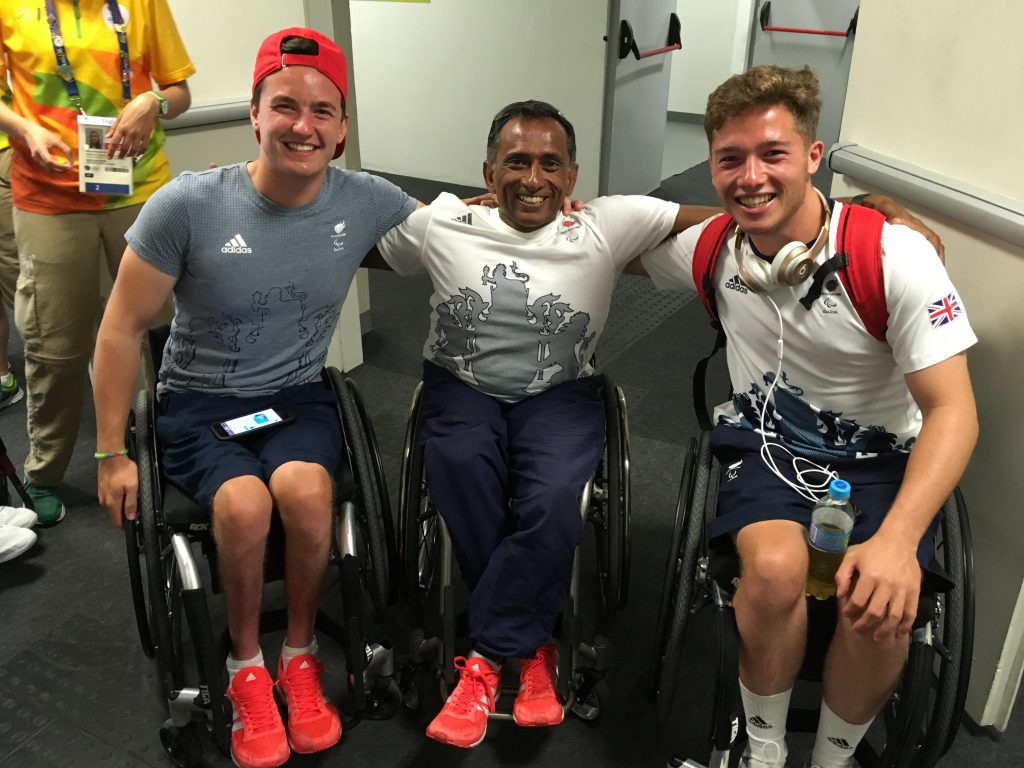 As well as his tennis career, Jayant was instrumental in the founding of the Leicester Cobras wheelchair basketball team, which is one of the biggest in the country.

Jayant says it’s up to the disabled person to go out there and integrate into society and not wait for things to happen to them. He’s certainly proved what can be achieved, by following those simple but motivating words.