The COVID-19 pandemic has hit the world hard. But of course, people don’t need reminding of how wide-spread and destructive it has been. Whilst the impact of this virus on our society does not need to keep being rehashed, the individual cases of the virus on the loved ones of those that have been lost can be devastating and should continue to be considered.

One case, in particular, is that of local businessman and retailer, Raj Aggarwal. Raj was a hugely influential man in the retail sector and touched the lives of many people both in and outside of the retail sector. Sadly, in March, Raj passed away after catching Covid-19 and this, I have learned, has left a massive crater in the lives of everyone that knew him.

I spoke to Sunita Aggarwal, Raj’s wife of 25 years, whose strength in coping with the loss of such a kind and caring partner is beyond admirable.

“Raj was a retailer through and through,” Sunita told me. “He is a born and bred Leicesterian. He left school in Leicester and literally went straight into his own retail business in Birmingham. Soon after we married, we sold up and moved back to Leicester to take on his family business with the help of his mum and dad, and brother. We’ve been here ever since! He was so well known, and his work was never done to benefit himself. He was always there for other retailers.

“Raj was a huge influencer in the retail community. He has been a board member for ACS, SPAR, Musgrave Group, Pepsi, Coke, KP Snacks and so many others.

He always said that ‘if you cut me open, you’ll see retail in my blood.’ He was passionate about his profession and those around him. In that sense, he was all about helping other people. Raj was always incredibly family-oriented, and we are a really close-knit family. After Raj passed away, I began to learn of more ways in which he has had a positive impact on other people’s lives. I’ve had so many of his friends and colleagues telling me about how he has helped them. He was always there for his friends and family, no matter what.”

Raj had spent many years as a board member for a number of different organisations in the retail sector. One of which was the Association of Convenience Stores (ACS). To recognise the work that Raj did, and to honour his legacy, ACS approached Sunita with an idea. They had decided to create The Raj Aggarwal Award, dedicated to the man himself. This award is to champion those in the industry that show the same sort of goodwill and kindness to other retailers through assistance and cooperation. 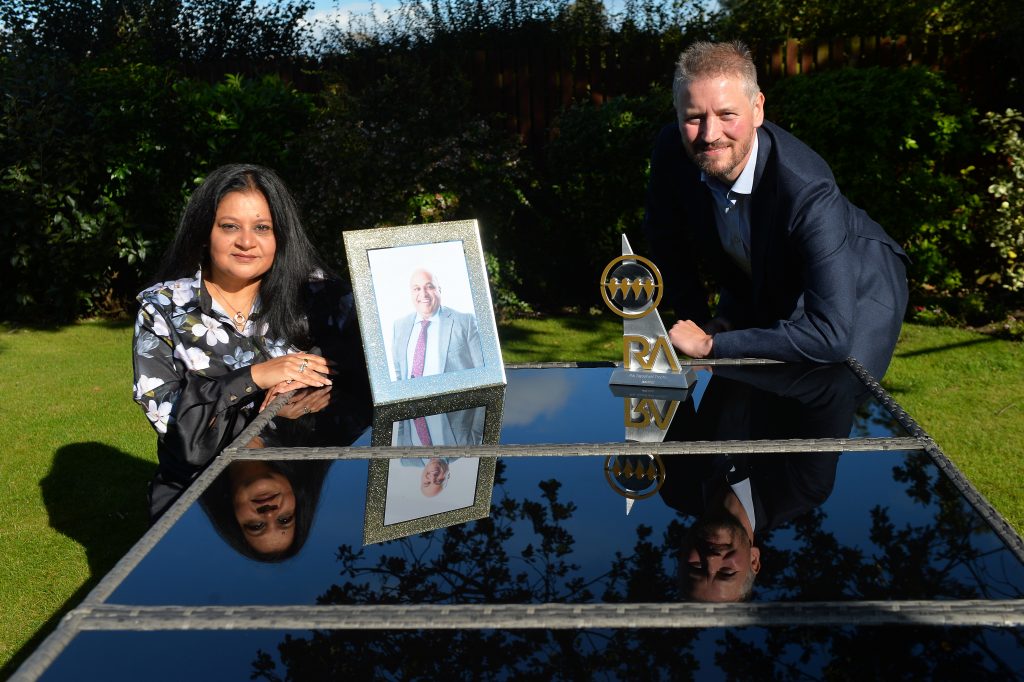 Sunita said: “That’s what he was all about and this is a way for them to keep his legacy alive – by creating this award. It would have meant the world to him. It really would have. His passion was retailing and helping others. It wasn’t about the money aspect, it was about helping other retailers in the industry move forward. To be recognised in the industry in this way would have really meant a lot to him. All he has ever wanted to do was make people happy.”

Not only was Raj set on looking out for other retailers, but he was also an incredibly dedicated family man and husband. Sunita said: “He surprised me with a trip to the Maldives for our 25th anniversary! It was like a romantic Bollywood holiday! He pulled out all the stops because he just wanted everything to be perfect for us. He always used to say that just once in his lifetime, he wanted to fly first class. We ended up doing that too! It was a testament to his mentality in life; anything he wanted, he worked hard to get it. He would also travel for business all around the world. He had such a full life but I’m under no illusions that he would have achieved so much more if he was still here. I’m so proud of his accomplishments and that he led such a positive life.”

Sunita told me the ways in which Raj touched the lives of others. One case, in particular, was when he reached out to another shop owner whom he had strongly conflicting opinions. They ended up becoming good friends and he even ended up becoming a sort of father figure to this man. His honesty and compassion for others, even those that thought differently to himself, was one of the myriads of things that endeared him to others. Raj’s approachable nature was also well known. Sunita said: “People would constantly come up to him and, because he was short and bald, they would kiss him on the top of his head! It somehow just became a thing people did and it just showed how much people loved him being around! The first time it started to happen, I remember thinking “What is going on here?” But that’s just how close he was to people.” 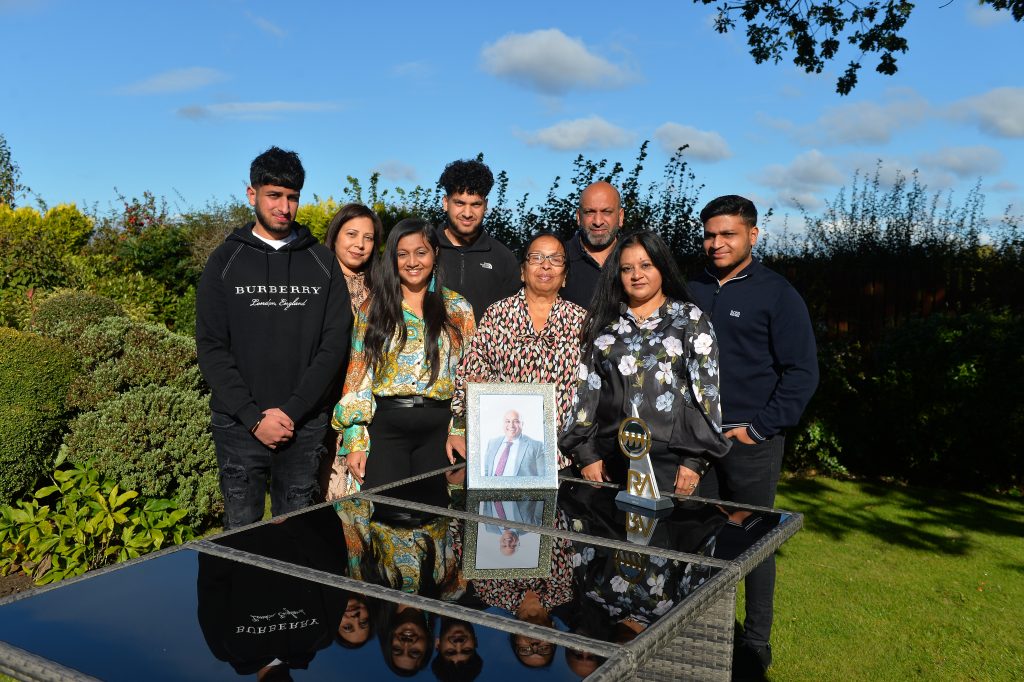 Raj did a lot of work for the community too. During the pandemic, he arranged help for Glenfield Hospital staff by delivering tea, coffee, and biscuits as a show of support. A few days before that, he had gone to Sheffield, where Raj and Sunita have another store, to deliver bread to the homeless. He also got involved in the Message in a Bottle Scheme which helps people with dementia and Alzheimer’s. This goal of which is to put the medication and important personal details and medical requirements inside a bottle and store it in the patient’s fridge. In the event that paramedics or other medical professionals visit them and need access to their medicine and medical notes quickly, they know exactly where to look. To demonstrate Raj’s commitment to these sorts of initiatives, a plaque has been put up in the Wigston police station that commemorates Raj’s unwavering support for the community and states that he was always “first to get involved in projects like these”.

Of course, it’s important to remember the incredible work of people such as Raj. But this doesn’t detract from the threat that the coronavirus still poses. This pandemic still affects thousands of people, and the numbers are still rising. “All I can say is that it’s a horrible, horrible virus,” Sunita said. “We all think we’re invincible but we’re not. Raj was so passionate about what he did. There were retailers and suppliers that he had contacted for free stock to donate to those that need it. He wasn’t going to stop with the biscuits and the coffee. I have emails and messages that I got when I went through his phone a couple of months later, saying things like ‘where do you want the stock dropped off, mate?’ and ‘We’ve got this for you’, ‘we’ve got that for you.’ He had so much more to give.

“Unfortunately with what happened… Well, you would have seen so much more. But that’s what he was; that’s what he was about. I think maybe Raj thought he was invincible too. I don’t know. It’s such a horrible virus, and I know it’s hard. It’s hard for us, but we all need to be careful and respectful of others. When you’re putting yourself at risk, it’s one thing, but you could also be putting other people in danger too. Of course, we need to try to get everything back to normal but we all just need to be careful of what we’re doing. There are a lot of people out there that are quite selfish and risking the safety of others. But there’s also the issue that the government is giving out so many mixed messages. It’s confusing to people and lots of us don’t really know what we’re meant to do. Sadly we’ve also not been able to grieve properly. When this happened with Raj, we thought, like so many people, it would only be a couple of months and things would go back to normal. But we were all wrong.”

Sunita received the award on behalf of Raj today, Sunday 11th October. There are also plans on the horizon to continue the work that Raj did in the community, headed by Sunita herself, in his memory.

More information about the ACS can be found here.

You can find out more about the Message in a Bottle Scheme here.