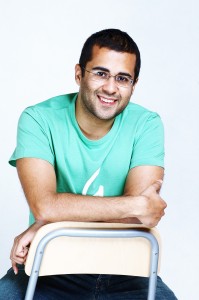 Bhagat has co written the screenplay for the upcoming film Kai Po Che featuring Sushant Singh Rajput, Raj Kumar Yadav, Amit Sadh and Amrita Puri. Directed by Abhishek Kapoor (of Rock On!! fame), the film is based on Bhagat’s novel The 3 Mistakes of My Life.

Speaking about his inspiration behind the story, Chetan said: “I lived in Gujarat and studied there in the Indian Institute of Management in Ahmedabad. I found Gujarat to be a very entrepreneurial city, which was very business orientated and different from the typical Indian mindset. I was fascinated by that.

“After I left Gujarat it came in the news for all sorts of reasons. I was quite surprised at how a place which was all about business, suddenly came in the news for earthquakes and riots. It got me thinking and became the inspiration for The 3 Mistakes of My Life which is about three boys who start a business.”

There is no evidence to suggest that any of the characters are based on real people, however, the story is based on real events. “People can expect a story of contemporary India – it is very gripping,” added Chetan. “The feedback we’re getting from people who have seen it (the film) is that they get very overwhelmed with maybe joy or even sadness. It’s a very intense film.”

With such a close bond with Gujarat, it’s understandable why so many people think Chetan is Gujarati himself. “I’m not (a Gujarati) but a lot of people think I am, especially because of this book. I think after this movie even if I try to deny it no one is going to believe me,” he joked. 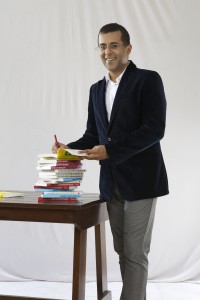 With five best-selling books to his name, Bhagat also writes columns for English and Hindi newspapers, focusing on topics of national development. Speaking about his writing career, he said: “I like to write stories, that’s most enjoyable, but if I only write stories and romance, I would feel a little meaningless. So, I do a lot of columns and political writing now, and political opinion leader kind of stuff, which is what I aspire to be as well.

“It gives my role as a writer in India a lot of meaning because people like me can change public opinion and this platform of Bollywood is amazing so I can reach a lot of people. Once I have their attention I can talk to them about anything.”

So does his future lie in politics or filmmaking? “I don’t know where my future lies it’s between these two. It’s not like I want to become a politician. You can be in politics just by being a neutral observer outside and having a strong voice. I believe in influence. I believe in inspiring people. I’m a motivational speaker too and as long as I can inspire filmmakers to make films I can inspire politicians to do a better job, and that’s good enough for me.”

Kai Po Che is his third novel to have been adapted for the big screen, with the shooting for the adaptation of 2 States having literally just begun. Interestingly, 2 States is based on Bhagat’s own life, however he is not heavily involved in the filmmaking process. Though his work has been accepted and reinvented for Bollywood, the novelist added: “I’m not going to let Bollywood dictate my journey so much.”

On a final note, Chetan said: “Kai Po Che is a film that’s going to make Indians abroad very proud. I don’t just want Indians to see the film, I want Indians to take their foreign friends along and show them that Bollywood is not just about running around trees anymore.”