Copenhagen possesses a captivating mix of historical charm and modern innovation. Recognised for its contemporary design, forward-thinking cuisine and laid-back atmosphere, it’s difficult not to fall in love with the Danish capital.

Before exploring this beautiful city, it would be wise to invest in a Copenhagen Card. Starting at around €51 per person for 24hrs; the card will allow you free access to a wide variety of attractions around the capital and discounts on entertainment and restaurants, as well as unlimited transportation on trains, buses and the metro.

Being a compact and sustainable city, the best way to get around Copenhagen, come rain or shine, is by bike. There is a public electric bike service in the capital called Bycyklen, with over 100 stations located around the city, the service offers a means of transportation at all hours of the day and night.

The city boasts a variety of accommodation, whether you’re backpacking and need a cheap place to stay or on a romantic getaway and want five-star luxury. There is a range of hostels and hotels located in the heart of Copenhagen to suit everyone’s tastes.

Take a casual stroll along the harbour-side and visit Copenhagen’s most famous resident since 1913, Hans Christian Anderson’s The Little Mermaid. Many people are surprised at how small the statue is. Take in the other beautiful sights along the promenade such as the Gefion Fountain, St Albans Church and Kastellet- a star-shaped fortress built in the 1600s to defend the city.

Explore the famous Tivoli Gardens, a must for all the family. Founded in 1843, Tivoli Gardens is one of the oldest amusement parks and has become a national treasure. It has been visited by many celebrities including fairytale writer, Hans Christian Anderson and Walt Disney. For the thrill-seekers, experience the nostalgic rides the park has to offer including the wooden Roller Coaster, the amusement park’s oldest ride. Opening in 1914, it’s one of the only roller coasters worldwide to have a brakeman on board.

Recommended for those with an interest in design and architecture, The Danish Design Museum exhibits the development of design throughout the 20th Century. Free to enter with a Copenhagen Card, the museum’s collections, library and archives form the central resource centre for the study of design and its history in Denmark.

Take in the incredible views from the tower at Christiansborg Palace, Copenhagen’s highest view point. The Palace, which is home to the Danish Parliament and Royal Reception Rooms, offers a variety of daily guided tours. On Saturdays, you can explore the Royal Kitchen, the Ruins under Christiansborg and the royal stables.

Wander around Thorvaldsens Museum, a gem in the heart of the city. Established in 1848, Thorvaldsens was the first public museum in Denmark. Enjoy the grand architecture, world-class art and the works of renowned sculptor Bertel Thorvaldsen.

Marvel at Amalienborg Palace, the official city residence of Queen Margrethe II and the Danish Royal Family. Every day at around noon, witness the changing of the guard as they march through the city from their barracks to the palace.

Copenhagen is home to some of the best restaurants in the world. You can sample a mixture of traditional dishes, as well as the world-famous New-Nordic Cuisine.

If you’re after a cosy atmosphere and traditional Danish food, then Kronborg is the place. Here you’ll find the Danish classic, Smørrebrød. This open-faced sandwich usually consists of buttered rye bread, topped with either meats or fish and cheese or spreads.

Sample a variety of international street foods opposite the bright Nyhavn Harbour at Papirøen (Paper Island). The indoor market which is filled with incredible smells and a buzzing atmosphere sells Mexican, Brazilian, Italian and Vietnamese cuisine. Enjoy your food with a craft beer and relax outside with views of the harbour. 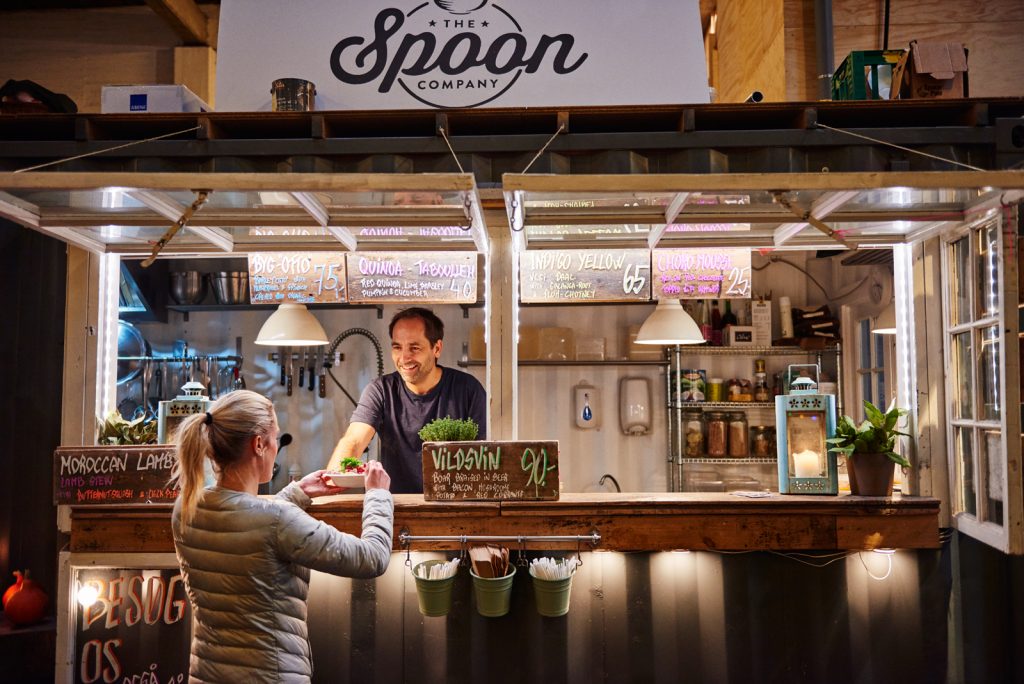 It wouldn’t be worth a visit to Copenhagen without trying the New-Nordic cuisine. The world-class gastronomic dishes put an emphasis on purity, simplicity and freshness, using only natural ingredients. Experience the gourmet restaurant, Noma, which holds two-Michelin stars and was ranked the world’s best restaurant in 2010, 2011, 2012, 2014 and 2015. Being a popular place to dine, it’s recommended that you book Noma in advance.

The capital is known for its love of craft ale and Mikkeller in Vesterbro is one of the best spots. Sample one of its locally brewed beers created by world-renowned brewer Mikkel Borg Bjergso. The bar is the perfect place to relax with friends before dinner or an evening out.

After drinks, experience Danish nightlife and dance the night away at Culture Box, Copenhagen’s prominent nightclub. Known for its electronic music, the venue also plays a mix of bass, house and techno.

Copenhagen is not only home to forward-thinking furniture; its fashion is cool and contemporary too. You’ll find an array of Danish flagship stores, as well as up and coming boutiques offering unique items and one-offs.  Shop around Strøget, the city’s largest shopping area for designer brands and high-street stores.

Whether you’re visiting Copenhagen for just a day, a weekend or even a week, there’s something for everyone to enjoy in this cool and cosy capital.