Family-run tandoori restaurant Khyber is celebrating its 30th anniversary this April. Pukaar speaks to one of the owners about the origins of the business and how curry tastes have evolved over the years.

It’s no easy ride running an Indian restaurant, especially when you’re competing against so many other establishments and that too in one of the curry capitals of the country. But, Khyber has managed to carve a niche for itself, attracting many regular customers over the years.

Run by brothers Ashok and Dinesh Raval, Khyber is a cosy family-run restaurant with an extra personal touch. “My brother never wanted to expand the business,” says Dinesh. “He always says this is my hobby and my business – I’d rather look after my customers. Normally if he’s in the kitchen, he can tell who has ordered a dish just by listening to the order. He knows exactly how the regulars like their food, and that’s why we have more of a personal touch.”

Though today they have a well-established clientele, things weren’t always so easy. Back in 1984 their father used his savings to buy the restaurant for the duo and Dinesh adds: “When we opened we started from zero. It was a hard struggle in the beginning and I even had to borrow money from my grandmother to pay the wages.” 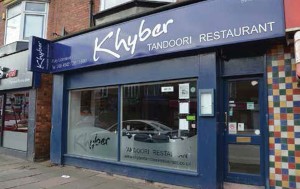 But over the years the brothers have put in long hours to get to where they are today, working 12-13 hour days, employing a total of eight staff members. The economic climate has affected business admits Dinesh, however, a bigger issue is the fact that younger generations of Asians are opting for alternative cuisines when dining out and are less likely to opt for Indian food. But, they then have other customers, like a couple from Nottingham who have been coming to dine at the restaurant up to three times a week since it opened, bringing along their now fourth generation family members. In fact, 18 months ago, as a gesture of goodwill, the Raval brothers decided to give the couple free meals for life.

When asked if they had any special plans to celebrate the restaurant’s 30th birthday, Dinesh said: “We were thinking that for a fortnight we would offer our original dishes at the original prices from our very first menu. But, we’ve lost our first menu so we have been asking our regular customers to see if they have any receipts that might help.”

Current favourites on the Khyber menu include chilli chicken and chilli king prawns with chilli paneer available for those who prefer a vegetarian option. “Wherever we offer a non veg dish, we try and do something similar that’s vegetarian to try and keep the balance.”

Do not let anything stop you