Named as ‘one of the top ten cities in the world to visit in 2013’ by leading travel guide Lonely Planet, Derry has also been awarded the prestigious title of UK City go Culture 2013. We take a closer look at Northern Ireland’s second city to see what all the fuss is about. 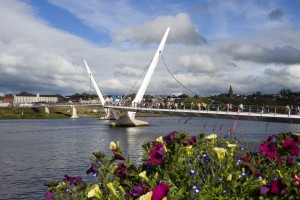 There’s plenty of culture to soak up in Derry (Londonderry), formerly known as Daire Calgach. From historical heritage and breathtaking scenery, to lively nightspots and an impressive arts and music scene, there is plenty to discover.

Yes, we’ll talk about all the sights and destinations that are worth taking a look at, but before that it’s fair to say that the real attraction is the people, who remain at the heart of the city. They are warm, approachable and very welcoming. In fact, it’s worth noting that Derry has one of the youngest populations in Europe, which ironically contrasts with it’s famous city walls that happen to be some of the oldest.

The famous city walls were built over a five- year period from 1613 by the Honourable, the Irish Society, as defences for the early 17th century settlers from England and Scotland. Derry happens to be the only walled city in Ireland, withstanding several sieges. It’s well worth having a walk around the 1.5km circumference, as the views from the walls are sure to linger in your memory.

If you’re interested in finding out some more about the city’s history and evolution then be sure to visit the Tower Museum to learn about The Story of Derry, which is a permanent exhibition highlighting its journey through Christian, maritime, emigration, economic and political events. It also houses the Armada Shipwreck exhibition.

You can grab a bite to eat at the Craft Village, which is conveniently placed behind the museum and features some independent small shops serving a variety of fresh food. Learn about the history and heritage of the Siege of Derry from 1688 to 1689 at the museum at the Apprentice Boys of Derry Memorial Hall and don’t forget to visit The Museum of Free Derry, which is an archive focusing on the civil rights era of the 1960s and the troubled era during the early 1970s. 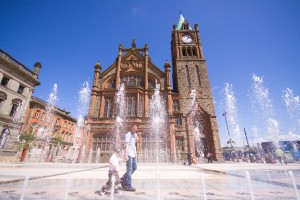 The destination is an ideal place for those who are looking for some added culture. Venues such as The Verbal Arts Centre, Nerve Centre, the Millennium Forum, Cultúrlann Uí Chanáin and The Playhouse are great places to check out local and international writers, dancers, theatre groups and singers.

There is no shortage of art on display either. There is a mixture of galleries that feature a range of international and Irish art as well as more cutting-edge spots where you can find some alternative pieces.

Despite lagging behind other major destinations in terms of redevelopment, Derry has come a long way in preparation for  it’s year as the UK City of Culture and truly provides some breathtaking views with its riverside setting. The Peace Bridge, which recently opened in June 2011 was intended to bring together the people living on both sides of the River Foyle and has been branded as a huge success. In fact it has become one of the main tourist hotspots for locals and visitors alike. The area also paved way for a new public space at Ebrington Square, which has been busy hosting some major events over the year.

There’s no forgetting the bustling nightlife either. As mentioned earlier the city has a fairly young population and it really comes to life at night. There are plenty of pubs, clubs and top-notch restaurants to take your pick from, when looking to relax after a busy day of sight seeing.

Travelling to Derry by car takes around one-and-a-half-hours from Belfast and around three hours from Dublin.

There are frequent bus connections to the city, with the Maiden City Flyer between Belfast and Derry operating every 30 minutes from Monday to Saturday. The Goldline Express from Dublin operates services to Derry every two hours daily. There is also a rail connection to Belfast via the scenic north coast route.

The train station is situated on the eastern side of the River Foyle and a free Rail Link bus connects it to the bus station on Foyle Street in the city centre. There are up to eight bus connections to Belfast from Monday to Saturday and four on Sundays.