A remarkable five-bedroom home in Leicestershire gets all its power and heating needs from natural sources. Pukaar’s Sarah Chetwyn explores the Eco-friendly potential of this lavish home. 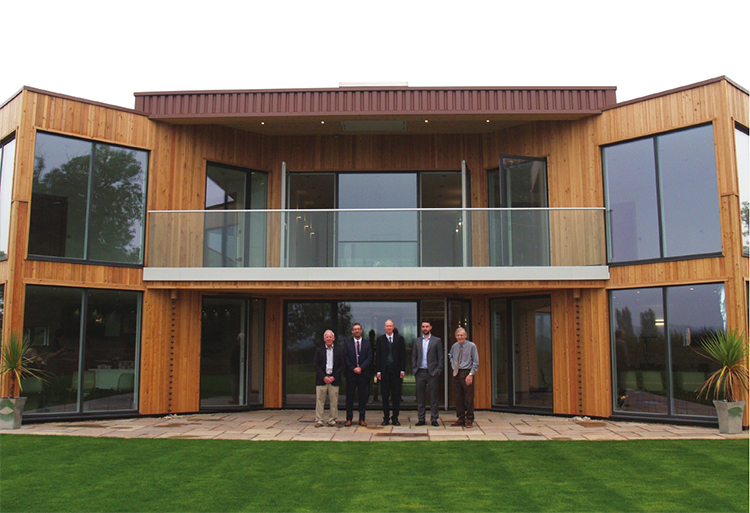 The latter end of 2013 saw escalating fuel costs that caused a phenomenon of fury across the Nation. With gas suppliers competing to keep custom, and new suppliers emerging, choices have become difficult to make for consumers who just wish to keep their family home heated. Developments of wind turbines and solar panels are yet to persuade those individuals who are more house proud than economically caring. The size and noise of wind turbines and the costly installation of solar panels has often deterred residents for opting for the long run low-cost option. However, this October, Leicestershire was recognised once again for an innovative stride towards a technological future – an Eco Home in Great Glen.

The extraordinary new house, the first of its kind in the world, was completed mid-October 2013 in the south-east of Leicestershire. The nicknamed “solar house” is the first new build house to be fully powered throughout the year, both for its heating and its power requirements, by solar energy. Traditional rooftop solar panels are joined by more experimental technology, including “solar walls” and an “Earth Energy Bank”. The “solar walls”, which preheat air before it is pumped into the home’s air ventilation system, look no different to plastered walls meaning they are ideal for the pretty idyllic rooms and the pocket. The “Earth Energy Bank” is one of the most impressive features to the house. Super-insulated underground pipes are laid in the foundations of the house and store excess heat collected during the summer. This “bank” of energy is then programmed to release during winter when the temperature begins to drop. With these two features alone it is easy to comprehend why this home project is such a futuristic yet revolutionary notion.

The timing of this project could not have corresponded better in order to be representatively used as a solution to the ‘Big Six’ bust-up. The beginning of October saw a tragic turn for energy companies and reaffirmed disbelief in resurrecting from the economic recession.

The energy companies announced their inflation-busting fuel price increases of 8.2%, adding an average £100 or more to bills. The duel announcement allowed the solar home to become the dream home and an escape from the ‘Big Six’ price hike. The lucky occupants of the solar house will pay nothing to heat or power the five-bedroom home. The walls of the south-facing U-shaped property are covered with metal that is punctured with tiny perforations. These panels heat up and hot air is sucked, through the perforations, into the home’s air-conditioning system. Hot water heated by solar thermal panels on the roof is pumped underground and stored, an enormous step forward from traditional ground-source heat pumps, which only use heat already in the ground and have to work much harder to provide re-usable energy.

“Every house stands on a plot of earth and every house has a roof. We make use of these to create a home that does not need a gas boiler to heat it,” says Dr Michael Goddard, director of Caplin Homes. Working for a sustainable homes outfit for a number of years and using the technology daily, Dr Goddard explained that he believes the technology is simple enough to use on the development of existing homes. He says it is so simple that it would only add a potential of £10,000 to the cost of a £100,000 new-build house.  Though the eco-home would be saving on an infinite amount of bills, it is placed on the market at a mere £1.5 million pounds! You would have to dig deep to splash out on this saviour of a home.

The acclaimed solar house is to be a one-off. However, the team behind it strongly believe in the technology employed and they hope that it will be used in volume for future architectural and building work.