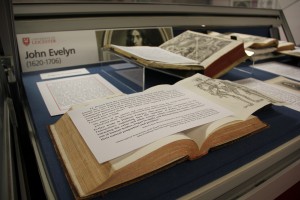 Throughout his lifetime, John Evelyn witnessed turbulent time and momentous events in history. In his writing, Evelyn has documented such events including the last epidemic of the bubonic plague in the United Kingdom, the Great Fire of London, the English Civil Wars and the Restoration.

John Evelyn was a very highly regarded horticulturalist, a lover of books and an avid writer and scholar. Evelyn’s Diary, which begins in 1641 was published in 1818 and is arguably the most historically informative and most extensive record of the significant period in history that he lived through.

Margaret Maclean who is a library assistant in Special Collections curated the exhibition at the University of Leicester and says that the works bring a great snippet of literature history to the city. “The exhibition aims to demonstrate the fascination of the diary and the appeal of the man – his commitment to the public service, his love of learning, his loyalty to his friends and, above all, his enthusiastic and inexhaustible spirit of enquiry,” she said.

In his own time, Evelyn was famed as a gardener and expert on trees and his most successful book was Sylva, which had the distinction of being the first official publication of the Royal Society in 1664 and was among those displayed in the exhibition. Additionally, there were portraits of many of the people who were influential to Evelyn throughout his life, as well as an engraved portrait of himself.

Evelyn had a privileged background. He was born in Surrey in 1620, to a landowning family who held a large fortune, founded in manufacturing of gunpowder. To escape the disturbances of the Civil War, Evelyn embarked on a period of time abroad in Italy and France, which proved to stimulate a host of new intellectual interests. He later met his wife in Paris in 1647, finally returning to England in 1652.

Until his death on 27 February 1706, Evelyn was a founder and committed member of the Royal Society, who was fond of engagement in public affairs. The last entries in the diary, in his own hand, are notes on the morning and afternoon sermons at Chapel on 3 February.

The exhibition is held within the basement of the David Wilson Library and may be viewed free by the public during staffed opening hours which are available on the University’s website. 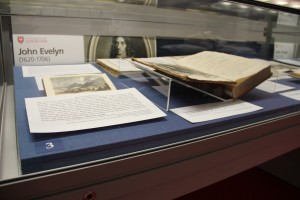