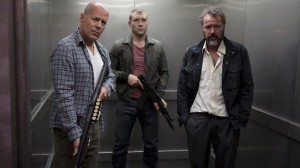 Naturally viewers will be expecting something special from Bruce Willis, who returns for the fifth instalment of the massively famous Die Hard series. Though the film is passable, light-hearted and a welcome fun distraction, it fails to leave a lasting impact.

John McClain (Bruce Willis) is showing no signs of heading to the retirement home. This time, he heads off to Russia to meet up with his son Jack (Jai Courtney) who is caught up in a slightly confusing plot to do with depleted uranium and terrorism. You know, what Russia is best known for. This involves rescuing a scientist (Sebastian Koch) from faceless gunmen and an evil, corrupt government man. There are also guns and bombs and car chases.

The dynamic between Jack and John was the tent pole of the entire film. With the amped up explosions and weapons fire, the relationship between the two ironically remained in the foreground as a result of not being overplayed. In fact, it wasn’t ‘played’ at all, it was just there. There was no childhood trauma or personal difference to be overcome. Essentially, Dad and Junior just went for a road trip while the world fell apart around them. Even more to this point, there was a single scene involving just the two driving to Chernobyl, laughing and joking without much a care in the world. The McClain’s don’t need to worry about imminent terrorist attacks; they’ve done this dance four other times.

The father/son dynamic even becomes the damsel in distress, that which must be rescued from the fire breathing monstrosity of the plot. The film knows it’s on a clock to deliver non-taxing entertainment and so doesn’t much bother with developments at all. The villains are given a passing ‘quirk’ (dancing mostly) in a slap dashed attempt at making them memorable and the final twist serves to awkwardly valorise the tough, good Americans over the slimy, two-faced Russians. Tension is dispensed by the frequency of explosions which feel like blandly necessary window-dressing.

These drawbacks, on the other hand, serve to compliment the smoothness of Willis’ pleasantly jovial performance and the heartening lack of conflict in the centre stage family relationship.

It’s a passing lark and delivers mostly what it promises with a few charming tags to distinguish it from other blockbusters.