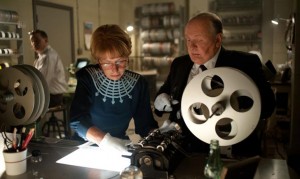 The year is 1959 and Alfred Hitchcock and his wife Alma, take on the project ‘Psycho’ in an attempt to ward off accusations and insinuations of it being time for the director to retire. But amidst the creation of one of the world’s greatest films, patience runs thin and tension escalates between the creative couple.

In many ways, the title is misleading, Hitchcock sadly does not deliver in terms of focusing on him, but instead, the film is devoted largely to his wife Alma. She’s in charge; from writing scripts, to casting, to simply being the wife ‘behind the scenes’. Although it is true that Alma was Hitchcock’s greatest collaborator, the genius behind the legend that is Hitchcock is brushed aside. Instead, we see very little of the man that we are supposedly watching a movie dedicated to.

Regardless, the film is entertaining in its own way and although perhaps not one of the stronger films to have been released so far this year, Hitchcock is certainly a film in which the talent is clear. With Helen Mirren’s performance as the ‘talent in the shadows’ earning her a BAFTA nomination, it is clear that one of the film’s strongest points is the acting. The plot is by no means a work of art, but the Oscar winning pair make a fantastic on screen couple, enough to salvage it and give this film enough of a reason to be watched.