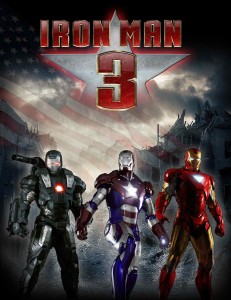 The latest film from Marvel productions, Iron Man 3 picks up swiftly from where The Avengers (2012) left us. Although The Avengers is by no means essential viewing, following his fall from the portal in the previous superhero packed film, we find Tony Stark (Robert Downey Jr.) plagued with  memories of the alien encounter and now suffering anxiety attacks. His relationship with Pepper (Gwyneth Paltrow) has taken a backseat and instead, Tony dedicates all his time and effort to working on his suits and handy gadgets.

There is plenty to praise in this film, but perhaps the biggest strength is the way in which the action is balanced with an extra dimension of drama. Following on from the mayhem of the two previous films, Tony hardly dons the suit in the third instalment and instead we see a more fleshed out and versatile character, alongside Downey’s usual wit, arrogance and sarcastic one liners.

In addition, the film sees Tony face two new rivals; Aldrich Killan (Guy Pearce) and The Mandarin (Ben Kingsley). Our first encounter with Killan shows him to be a crippled ‘nerd’. Dismissed by Tony who has no interest in his plans, he returns thirteen later with a vengeance. An interesting villain, although not quite as interesting as the terrifying terrorist, The Mandarin. Played by the talented Ben Kingsley, the character is a perfect blend of dangerous and hilarious. Fans of the original comic book may be disappointed with this adaptation of Iron Man’s original arch enemy, but he is an enjoyable character nonetheless.

Just as the two villains and the romantic elements add to the film, the smaller side relationships make it. Colonel Rhodes (Don Cheadle) returns and his chemistry with Downey Jr. makes for a delightful onscreen friendship. Similarly, the young boy from Tennessee who Tony befriends is the reason that there was so much laughter from the audience.

HIGHCROSS – THE NEXT GENERATION OF SHOPPING