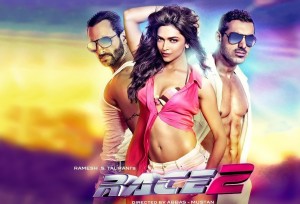 Race 2 has it all; fast cars, action, romance, beautiful locations, good looking men and women strutting their stuff as if they’re on the catwalk, and lots and lots of money. It’s a true masala film made in typical Abbas-Mustan style.

Without giving too many of the twists and turns away, Saif Ali Khan plays the role of Ranvir Singh who tries to con billionaire Armaan Malik (John Abraham) and his half ‘shanni’ sister Alena (Deepika Padukone). Armaan’s fiancé Omisha (Jaqueline Fernandez) dishes out a few surprises along the way.

Anil Kapoor also returns as Inspector Robert D’Costa along with a new ditzy assistant Cherry (Amisha Patel). This time the majority of the story is set in Turkey and involves casinos, private jets, yachts and a big loot – in the form of (get ready for it) the Shroud of Turin.

Let’s be honest, the plot of the original Race wasn’t anything to really brag about, but the unexpected twists and well scripted characters made the film what it was. The problem with Race 2 is the fact that the plot isn’t great and you somewhat expect the characters to be double crossing each other so nothing comes as a real surprise. This isn’t helped with ridiculous gadgets and gizmos that make you laugh out loud, such as Alena’s clever sunglasses and her ‘special’ deck of cards. 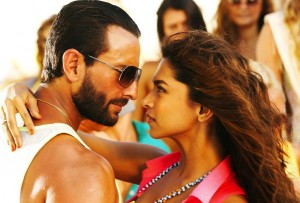 After some time wasting songs and an unnecessary underground fight scene, we witness a rather ridiculous ending on a private jet which makes an already bad film worse.

On the plus side the actors all look stunning so if you’re looking for a visual treat be it in the form of Deepika Padukone or John Abraham, Race 2 will not disappoint. ‘Be Intehaa’ is certainly the pick of the tracks, with ‘Lat Lag Gaye’ also leaving an impact, but unfortunately even the rest of the sound track doesn’t match up to the original.

While the Leicester Odeon was packed out, I don’t think Saif Ali Khan will be in a hurry to sign on for a third installment in the franchise. However, with a star-studded cast the film should do well at the box office.