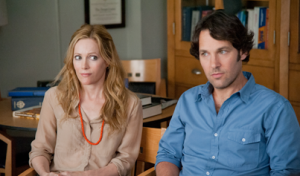 Pete (Paul Rudd) and his wife Debbie (Leslie Mann) are turning 40 and in an attempt to lead happier lifestyles, they go about trying to change themselves. But with Pete’s independent record company struggling, Debbie’s attempt at working on their relationship failing and their two young daughters dealing with their own modern day ‘kid issues,’ it’s far from a smooth process.

Going into a movie with low expectations and then walking out with a smile is always a pleasant experience. Geek comedy genius, Judd Apatow’s (Knocked Up, Funny People) latest film, This is 40 had the potential to go very wrong. Its tagline declares it to be a ‘sort of sequel’ to Knocked Up and it’s no secret that sequels are either brilliant or horrific. Thankfully, This is 40 is a fine example of something brilliant. So many comedies these days can be considered to have a ‘stupid’ humour, but Apatow is a fine director and more importantly, he is a great writer. The film is in a league of its own; full of witty and consistent gags, whilst simultaneously being warm and sincere, focusing on the importance of relationships and family within society.

Although at times unrealistic, (do parents really argue with and threaten thirteen year old ‘facebook bullies’? And does taking an expensive trip to a fancy holiday resort and doing things which parents probably shouldn’t be when financially struggling really seem likely?) The situations the characters find themselves in make for great and enjoyable scenes and Paul Rudd and Leslie Mann give fantastic performances as Pete and Debbie. Similarly, supporting actors (Jason Segel and Megan Fox) are equally as hilarious and Apatow’s use of his wife and both of his daughters gives the film a nice and endearing touch.

Predictably, everything works out and we’re given a happy ending, but it by no means takes anything away from the two hours of an energetic mix of drama and comedy. It is lengthy for your average comedy, but one that will most definitely please, even up until the final scene, after the end credits!