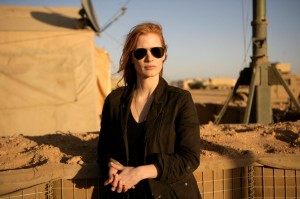 Reminiscent of popular television dramas like Homeland and 24, Zero Dark Thirty focuses on the war on terror, but more importantly it focuses on the hunt to find one of the world’s most wanted men – Osama bin Laden.

The film reunites the Oscar winning team of Katheryn Bigelow (director) and Mark Boal (writer, producer) after Hurt Locker (2008). Based mainly on the official version of events described by CIA officials, the audience is taken on a journey through the eyes of CIA agent Maya (Jessica Chastain), who you could argue, single handedly tracked down the location of America’s public enemy number one.

The story doesn’t go into any detail about her past, apart from the fact that she was recruited out of high school and has since been working on this one mission. The story is about a woman told by a woman and Katheryn Bigelow handles the narrative perfectly. Instead of witnessing different gruesome ways of torture (of course there are some scenes of this nature and the waterboarding ones may make you flinch), the film isn’t packed with unnecessary action, but is more about the discovery of the man and the thought process behind it. 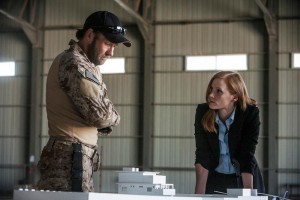 The strong willed Maya is not afraid of conflict with her colleagues and is a woman who backs herself all the way. In a particular boardroom scene when the top boss asks ‘Is it him?’, the men are all meandering around the 60 per cent mark while Maya is the only one to put her neck on the line and says ‘100 per cent’.  The director shows us a more humane side to the character too as we see her breakdown after the death of some of her colleagues. In fact, even in her very first scene with the agency’s torturer Dan (Jason Clarke), she seems somewhat uncomfortable (wouldn’t anyone be?) in the torture room as he’s trying to recover information from a detainee.

The climax scene, shown through night vision goggles is particularly commendable. We see the brutal side of the Navy SEALs as they sweep through the house shooting man after man, but sparing the children and the majority of the women. After identifying Osama bin Laden, we’re not shown scenes of the President celebrating, but rather a somewhat lost Maya climbing onto a plane, unaware of her next destination. With tears strolling down her cheeks, we are left to imagine what life holds in store for this mystery CIA agent who’s true identity will most likely never be revealed.

Of course there are a few pieces of information left out of the story, which take away from its somewhat true documentary-stye narrative, but on the whole it is a decent thriller that will leave you feeling satisfied.