His work has appeared in a short film, won numerous prizes and is currently in talks of his first solo show. Jessica Challoner-Sterland chats to figurative artist Vishal Joshi about this new and exciting chapter.

It was three years ago that Vishal took the plunge and quit a stable job in order to fulfil his passion of becoming an artist. From the pure joy on his face, as he tells his story, I can tell it was one of the best decisions he ever made.

From the age of seven, the artist was already painting realistically, but it was from the age of 14, whilst undergoing treatment for Hodgkin’s lymphoma, that he began to perfect his craft: “I’d learned how to conceptualise my thoughts whilst having chemo because I had to find a language to speak in, and verbally has never been my strong point. I use to have a speech impediment, and I couldn’t demonstrate what I wanted to say, but I could through art. It wasn’t always the right conversation through art, but it was a deviation from my truth, so art became my escape.” 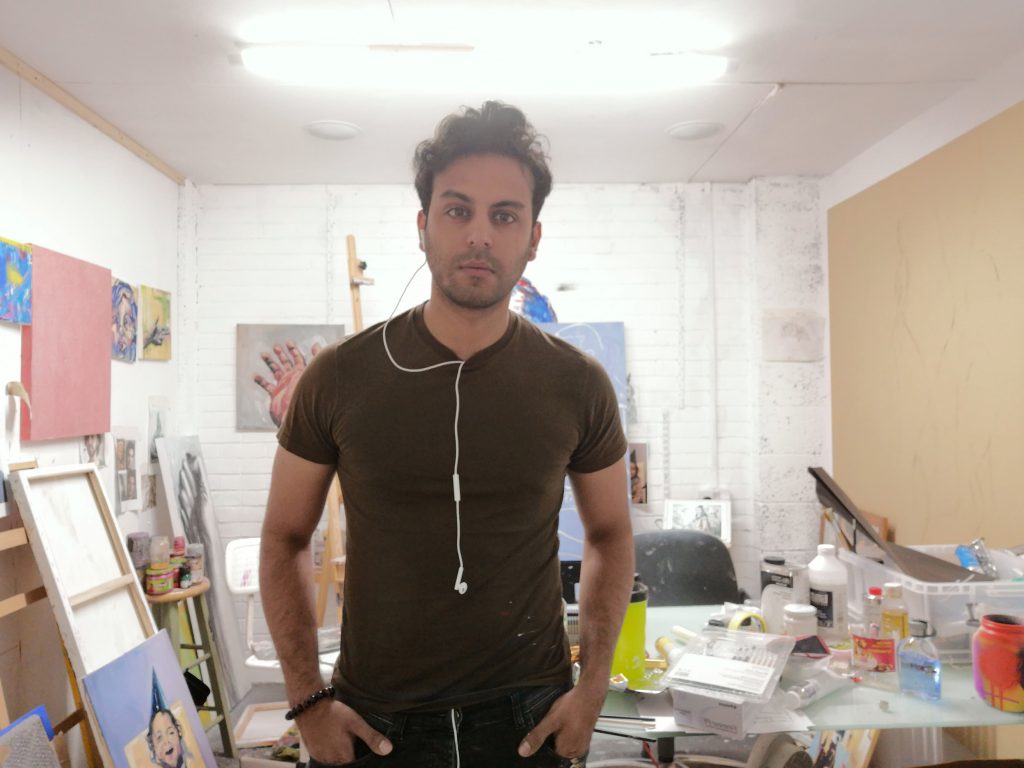 Nurturing his skill throughout his teens, he went on to study an Art Foundation at Gateway College in Leicester and then on to a BA (Hons) in Fine Art & Painting at Wimbledon College of Arts in London.

Created in 2017, Vishal’s piece, ‘Hold on, Let Go’, he shares was what reignited his love for painting once again: “It was about this clutch that’s always holding on to you and then letting you go. I think everyone’s in a position whether it’s with relationships, or dieting, that feeling of do I stay, do I go? That painting became a meditative piece that I wanted to commemorate that feeling.”

Experimental with ideas, mediums and techniques, the artist reveals that his work is an exploration of identity. It questions society, labels and rules.  He’s inspired by Philosophers and the great works of many artists; in particular, Lucian Freud, Paul Wright, Jenny Saville and Toby Mulligan:

“Jenny Saville made an impact on my paintings throughout my teens through the use of her scale and how she handled skin tone. In terms of technical expression, Paul Wright, who is also from Leicester, played a massive part in teaching me how to put the likes of a big canvas together and how to get to grips with it all.” 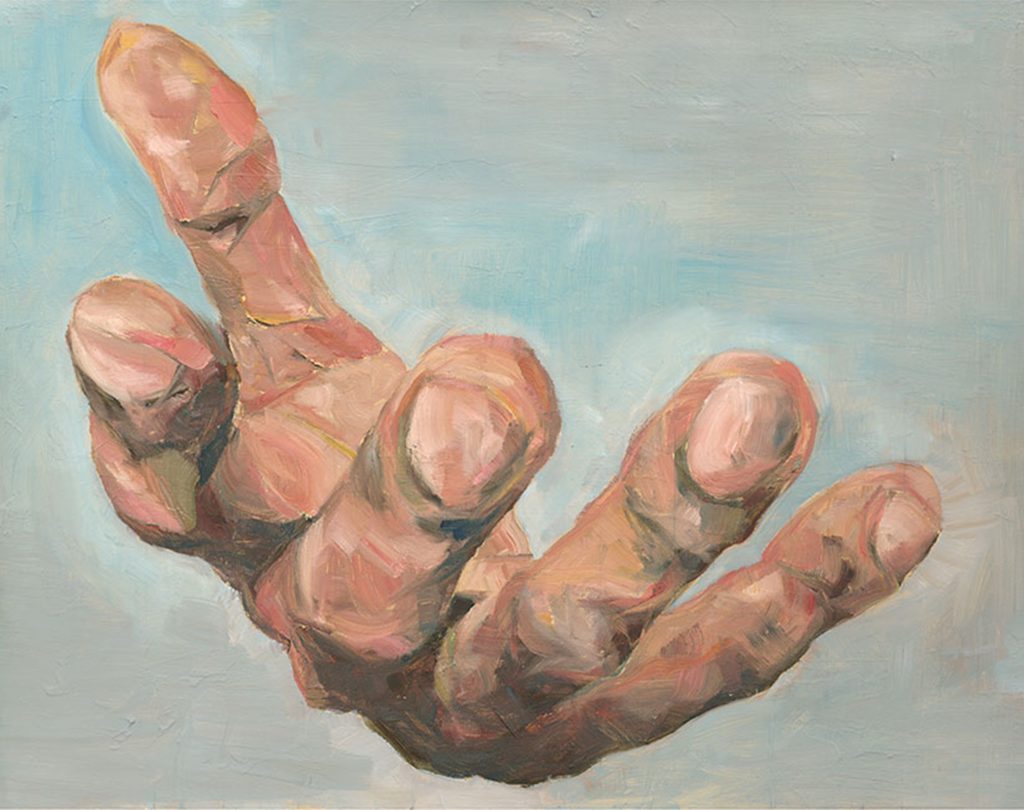 His work has earned him recognition across the city and further afield. In 2017, his portrait of Connor McGregor won him first prize at the Leicester Sketch Club’s annual exhibition. In 2018 he won the L.O.V.E Art Prize hosted by the Curve for his mural ‘Ascension’ that he painted on their windows. He also sold a painting to award-winning comedian, actor and writer Asim Chaudhry which appeared in his short film, Love Pool. Vishal shares how his work has evolved:

“The biggest thing that I’ve seen change is my confidence to scale. The first time I did a painting that was a metre tall was whilst at college, and I painted myself, inspired by Jenny Saville. How I approached scale then to how I approach it now, is so much easier. Back then, it was daunting and new, but now I know it really well. I don’t mind making a mark and ruining something and starting again.” 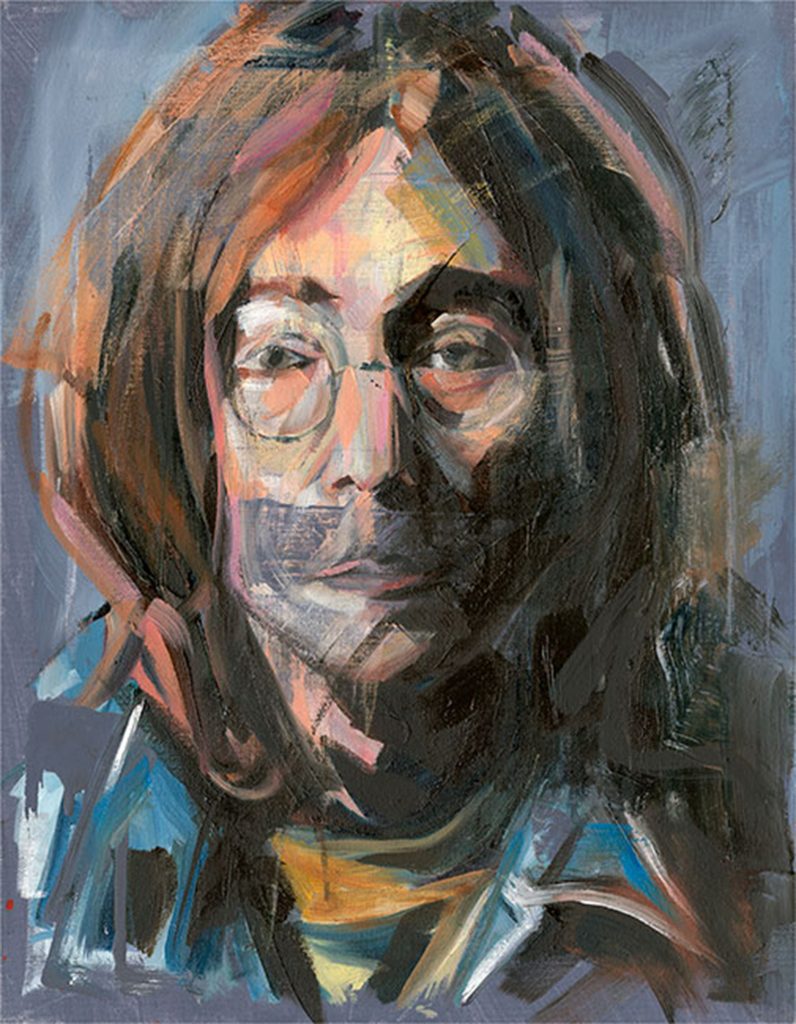 Having been working on glass for the last two and a half years, which has included a mural he created on the window of Oadby House showroom of Sir David Attenborough, the artist is now in talks of his first solo exhibition. Although not quite set in stone, he reveals that he’s expecting to showcase between 15-30 pieces:

“The exhibition will be a chance for me to show what I’m about to people who have just seen fragments here and there.

“I’d experimented with Perspex and glass whilst at college and university but not properly. I’m now looking at it in a whole different way and what it means – In terms of something being present within your space but you can still see through it, which allows you to reflect differently on that part that you can see. You can also look through someone, so it’s this whole thing about our identity, and what the image of someone or something portrays.”