PUKAAR’S AARTI THOBHANI PAYS TRIBUTE TO TRAGIC HELICOPTER CRASH VICTIM RAF FLIGHT LIEUTENANT RAKESH CHAUHAN WHO WAS AN INSPIRATION TO HIS FAMILY, THE COMMUNITY AND THE NATION 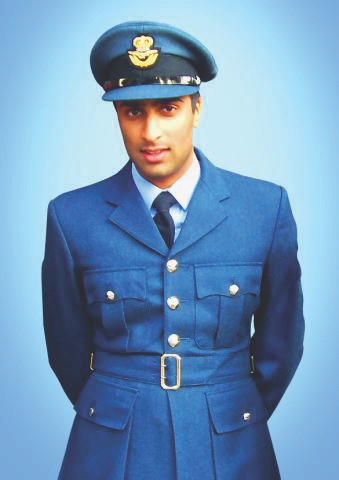 Flight Lieutenant Rakesh Chauhan, an Intelligence officer with the Royal Air Force, died in a helicopter crash in the Kandahar province of Afghanistan on the morning of Saturday 26th April 2014. The Leicestershire-based hero was described as a patriotic, intelligent and articulate gentleman.

Born on 3rd February 1985  in Birmingham, to parents Kishor and Jyoti Chauhan, Rakesh’s passion for the RAF started early. His father Kishor explained that “At around the age of 11, Rakesh saw that there  was  a CCF (Combined  Cadet  Force) at his school. He joined and from then on, he always wanted to do it.”

The 29-year-old, who was  on his third tour of Afghanistan, left King Edwards High School  in Edgbaston in 2003,  with the intention of entering the Royal Air Force, having been awarded the medal for the school’s most outstanding cadet, with the rank of Cadet Warrant Officer of the CCF. He studied at the prestigious St Andrews University, where he gained a Master’s degree in International Relations, before commencing his officer training at RAF Cranwell in 2008.

Discussing this choice of career, Kishor shared: “We were apprehensive, but we were also very proud of him because it is not easy to be an officer in the Air Force. There were a lot of difficult exams and training that he had to go through but he excelled at everything; to him it came naturally and he loved it. That made us happy because he enjoyed what he was doing.”

Due to return to his home in Cropston, Leicestershire before the tragic accident, Flt Lt Chauhan died alongside three members of the Army Air Corps; Captain Thomas  Clarke, Warrant Officer Class  2 Spencer Faulkner and Corporal James Walters, and Lance Corporal Oliver Thomas of the Intelligence Corps.

His funeral took place  on 22nd  May 2014, with the procession beginning at the tip of the Golden Mile, where the family business Milans Sarees is based. Mourners stood in silence to pay their respects, and the service was held at Loughborough Crematorium, with full military honours and special words delivered by his former teacher. His coffin was draped in the Union flag and adorned with red, white and blue flowers together with his hat and gloves.

His older brother  Kesh, 31, spoke  proudly of his sibling, commenting that, “Everything that Rakesh did, there was always something more, it wasn’t just that he was going to join the forces, no, it had to be in the most difficult branch you could possibly be in and he achieved such a high position, despite his very young age. As a younger brother he was a pain, but I guess that’s what I will miss most.”