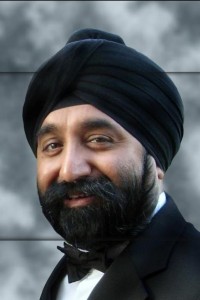 Yash Raj Chopraji was not only a legendary Bollywood filmmaker but he was a great personality who was serious on set when he needed to be, but also a whole lot of fun to work with.

In 2007 the chairman of Roko Cancer Mr Chawla invited Mr Yash Chopra and his wife Mrs Pamela Chopra to London to host a dinner at the Houses of Parliament to appoint Mrs Pamela Chopra as one of its Champions. Mr Chopra had a heart of gold and so does Mrs Pamela who is actively involved in working for a number of good causes.

Proud of its multicultural diversity I am very passionate about promoting the city of Leicester. Being an international traveller I sometimes find it very disappointing when I tell people I am from Leicester and they respond by saying ‘where is Leicester?’ Everyone knows of London, Birmingham, Manchester, Glasgow and Edinburgh but not many know of Leicester and how special it really is!

On hearing that Yash Chopra was in London I took the opportunity and asked my uncle
Mr Chawla if he could spare a whole day for Yashji so that he could visit Leicester. I suggested we would like to give them a tour of the city with a vision in mind that some day he might decide to film a Bollywood movie here.

Having a Bollywood production in Leicester would be a great way to promote the city as there are millions of Indian film fans across the globe. Not only this, having a film production unit in the city would also generate a lot of revenue.

My father-in-law Mr Anand of Anand International was also very passionate about promoting Leicester. In 2009 he called Sunny Deol to the city and requested that I assist him in looking for locations so that he could bring a movie production here. Today, I am proud that the film Yamla Pagla Deewana 2 is being shot in Leicester and the Midlands. The credit goes to Mr Mahal (Sunny Deol’s father-in-law), my father Mr Anand and also Sunny Deol himself who actually approved the film to be produced in the Midlands.

The director Sangeeth Sivam, Sunny Deol, Kristina Akeeva and many others have been celebrating their birthdays during the shoot, which has also generated a lot of media coverage worldwide. I am very grateful to Dharmendra Ji, Sunny and Bobby for bringing such fun to our city and raising the profile Leicester.

Coming back to Yashji, I arranged for him to come down and assisted him on a tour of the city on May 16, 2007. On arriving to Leicester he visited the Meridian Business Park and  then proceeded to the Leicestershire County Cricket club where a lunch was arranged with Chairman Neil Davidson. 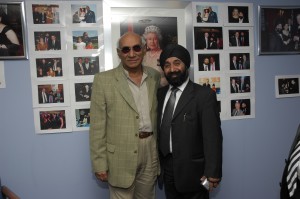 After the tour of the club a press conference was held on the balcony where I also had the opportunity to ask a few direct questions. To conclude, Mr Davidson presented Yashji with a lifetime membership to the club, along with numerous other gifts.

We then carried on for a tour of Leicester City Football Club. Mr Chopra was thoroughly impressed with the club and even visited our box at the club. It was here that he said it would be great, to one-day film a girls football match for a movie.

A television press conference was arranged to take place inside the box where Mr Chopra took questions from all media present. He then proceeded on to the main football pitch where he was gifted a Leicester City Football Club shirt with ‘1 CHOPRA’ written on it.

Following on from visits to the local sports clubs we then drove along Melton Road and Belgrave Road, more commonly referred to as the Golden Mile. Our final destination was the Peepul Centre. Here my son and daughter presented the director with flowers and gifts.

Most of Yash Chopra’s films were based on the theme of romance and he was famous for churning out some of the greatest love stories Bollywood has ever made. Some of these great titles include Kabhi Kabhi, Kaala Pathar, Silsila, Vijay, Chandni, Darr, Dilwale Dulhania Le Jayenga, Dil to Pagal Hai, Veer Zaara, and his final film, released shortly after his death, Jab Tak Hai Jaan.

In fact, I would say that Mr Chopra has also had a major part to play in the success of superstar Shah Rukh Khan. Having directed him in his final film, in a special one-off interview Yashji had admitted to the actor that it was time for him to retire. It’s ironic of course that though he never actually retired from moviesas his final film released after his death, it seems that he retired from life.

When I think of Yash Raj Chopra, I think about a man who was full of humour, someone
who had a golden eye – he could always spot a star in the making. He created many superstars in the Bollywood film industry and worked with them on a regular basis. His most favourite star was Amitabh Bachchan, but this was not just because of his acting ability, but more so because of his punctuality and attitude towards his work. Mr Bachchan was so punctual that he would always be on set well before time.

I salute to Yash Raj Chopra and pray to the Almighty to bless his soul and give courage to his wife Pamela Chopra and his entire family for their loss. He will be remembered always and will continue to live on forever through his movies.