IT’S EVERY WRITER’S DREAM TO BE TOLD THEIR WORK IS WORTHY OF THE SCREEN, FOR AWARD-WINNING AUTHOR LOUISE DOUGHTY, THAT DREAM BECAME A REALITY. SHE SPEAKS TO PUKAAR MAGAZINE ABOUT THE EXPERIENCES THAT HAVE LED TO HER SUCCESS.

This January saw the release of BBC One’s hit drama, Apple Tree Yard, a four-part series adapted from Louise Doughty’s bestselling novel under the same name. But beneath all the success, lies hard work and admirable perseverance.

Born in a village close to Melton Mowbray, Louise moved to Oakham with her family at the age of two. It was here that she attended the market town’s Church of England Primary School, later followed by Oakham School. Looking back, Louise refers to herself as being a “clumsy, bookish child and very left-handed.”

Unsurprisingly, English was the author’s favourite subject at school, where she took pleasure in writing stories for homework. Growing up in a small town with little else to do, Louise became an avid reader and enjoyed imaginative stories filled with fantasy and science fiction: “My favourite books were the Narnia stories by C. S. Lewis and the Earthsea books by Ursula K. Le Guin. She was the J. K. Rowling of her day and had a dark edge that was compulsive to me as a child.”

As the author’s passion for English Literature continued to flourish, she took up the subject at Leeds University, later followed by an MA in Creative Writing at the University of East Anglia, taught by the esteemed Malcolm Bradbury and Angela Carter.

After studying, and determined to become a writer, Louise made the decision to move to London in search of opportunity: “The most important thing for me was not about earning a living, but about how I wanted to spend my time. What did I want to do when I got up in the morning?  When I asked myself that question, the answer was clear – I wanted to write.”

Feeling the pressure of London life, Louise only managed to write part-time as she worked a variety of odd jobs to support herself, from cleaning and teaching to secretarial stints. Fortunately, after discovering other literary routes, Louise started writing features for the likes of the Guardian and Independent and became a books columnist for the Daily Telegraphs Saturday Review section; she also landed a full-time position at the Mail on Sunday’s Night & Day Magazine as their theatre critic.

After writing seriously for over a decade, Louise finally got her break and accepted a two-book deal with Simon & Schuster in 1995 for her novel Crazy Paving. Inspired by her job as a temporary secretary, the book is a black comedy about accidents, chaos theory and urban terrorism. As well as being accepted before it was complete, the book also became shortlisted for four awards.

Taking inspiration from past experiences and familiar places, Louise shares what else influences her novels: “Often, it starts with something as basic as an image – and where those images come from, I couldn’t say.  With Apple Tree Yard, it was the image of a woman on the witness stand at the Old Bailey. I didn’t know who she was or what she had done, but I did know she was to be caught out in a very damaging lie. With Black Water, it was a man lying awake in a hut in rural Indonesia, afraid for his life.  In each case, I had to write the novel to find out what was going on.”

As well as writing, Louise also teaches her passion to others and has given lectures and workshops all over the world in India, Indonesia, Australia and Canada: “I love it, after writing it’s my favourite thing to do. I feel that I can relate to new novelists, particularly those who are struggling with self-doubt or mockery from others. It seems only ten minutes since I was in that place myself.”

With a complex writing style, the author reveals that her most challenging novel to date has been her most recent, Black Water, published last year by Faber & Faber: “It’s about a man called John Harper who works in private security. As the novel opens, he is waking up in a hut in a remote area of rural Indonesia and is mortally afraid. He believes men with machetes are going to come and kill him. Pretty soon you realise that what he was really afraid of, is not what is going to happen, but something he has done.

“The book required so much research and thought. I don’t know what I was thinking, setting a novel in a long-haul destination whilst my children were still in school. I must have been mad.”

Acquiring a growing list of work to her name, Louise happily accepts that out of them all, her bestselling novel, Apple Tree Yard is the one that’s most likely to define her. The novel is a courtroom based psychological thriller about desire and its consequences. Now available in 19 languages, this January saw the release of its four-part TV adaptation starring Emily Watson and Ben Chaplin: “Apple Tree Yard was optioned by Kudos TV when it was first published in 2013. They seemed very confident that they could interest a broadcaster. When BBC One commissioned it, I was very pleased, but I don’t think I really believed it was going to happen until they started filming.”

Working as the associate producer for the series, the production team involved Louise in all aspects, from filming through to the editing: “I saw all four episodes before they were broadcast, so I knew what was coming. I think they did an amazing job.”

With eight novels, one work of non-fiction, five radio plays and a TV adaptation, we’re curious to find out what’s in store: “I’m working on my ninth novel. It’s still early days, but I’m excited by it.  I’m also working on an original drama for TV and enjoying the collaborative process a lot, but novel-writing is my first love, I just want to keep doing more of that.” 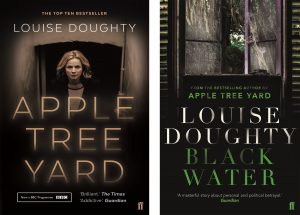 To enter, send your answer along with your address to: info@pukaarmagazine.com by Friday 23rd June 2017.