Debbie James, owner of The Bookshop Kibworth speaks to Jessica Challoner-Sterland about the shops humble beginnings and reaching award-winning status.

For as long as she can remember, Debbie James always dreamed of running her own bookshop, and back in 2009, after leaving a career in the music industry, she turned that dream into a reality. Now, eight years later Debbie could have never predicted how successful her business would become.

Nestled within the charming village of Kibworth Beauchamp in Leicestershire, The Bookshop Kibworth is a book lover’s heaven. You can lose yourself for hours amongst the paperbacks and hardbacks of the classics and contemporaries that neatly line the identical white shelves. Debbie shares why the quaint Leicestershire village became the home for her business: “I did look at existing bookshops which were for sale, all over the country. But my job at the time, working for Premier Drum Company had brought me to South Leicestershire and our offices were based in Kibworth.

“My boyfriend and I would walk up to the High Street daily to get our lunch from The Deli, and that’s when I saw the empty unit and thought that it would probably be better to start a brand new bookshop from scratch.” 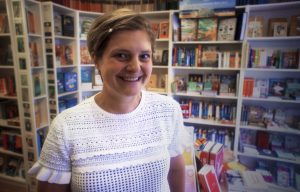 It was during her teens that Debbie fell in love with Literature thanks to Anglo-Irish novelist and philosopher, Iris Murdoch. And since then, the likes of Elizabeth and Her German Garden by Elizabeth von Arnim, The Fountainhead by Ayn Rand and The Magus by John Fowles left an impression.

The undoubtable passion Debbie expresses for literature certainly shines through which in turn results in the exceptional customer service that The Bookshop Kibworth provides. Debbie, along with her two like-minded colleagues’ Kerry and Clare share their knowledge and recommendations to each one of their customers, as well as providing a great range of services:

“We can order in any book in print for next day delivery at no extra charge for customers, so this is one great reason to return. We always have a good stock turn too, with new books arriving every single day, so there will always be something fresh to browse.

We offer library-sorting and book-provision services for schools. We give schools and colleges competitive discounts and a friendly personal service, which includes book recommendations for both primary and senior. We also provide pop-up bookstalls for external events, as well as our own and have worked with Leicester University, Curve, The Y Theatre and Phoenix Cinema amongst others.”

As well as its incredible services, the bookshop also runs the annual Kibworth BookFest. Since it began back in 2009, the annual festival has grown due to its popularity and currently hosts 12 events throughout the month of June. Over the years, its enjoyed talks and readings by authors including Gyles Brandreth, Joanna Cannon, Joanne Harris, Muzzy Izzet, Max Porter, Nina Stibbe and Salley Vickers.

“It actually started as ‘Leicester Book Festival’ at various venues around the city, but we found that the audiences were mostly made up of our customers from Kibworth and the surrounding area, so we thought it would make more sense to host the events locally. Leicester also already has Literary Leicester at the uni, Everybody’s Reading and Leicester Writes so this way we’re not competing for audience numbers.” 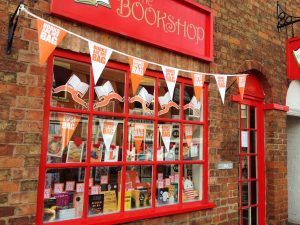 Paving the way forward for literature and independent booksellers alike, it’s no surprise that it’s been recognised for its incredible efforts. Debbie speaks about the bookshops awards and what they mean to her: “They mean the world to me. Especially as I haven’t been trained in bookselling or studied for this career. The first year we entered Independent Bookshop of the Year in 2011, we were overall Regional Winner, and we were shortlisted for the next five years too.

“We’ve also won Vintage Indie Bookshop of the summer, Caboodle Bookshop of the Month and more recently a Muddy Stiletto award. Our biggest achievement is probably being awarded three James Patterson Grants for our work in promoting a love of books and reading amongst children.”

During the autumn of 2016, the bookshop expanded when the flat above the shop became vacant.  This growth has doubled the floor and shelf space and has trebled the size of the children’s section. The newly refurbished upstairs also features a cosy seating area for customers to feel relaxed and browse at ease.

With all expectations exceeded, Debbie humbly shares her vision for the future of The Bookshop Kibworth: “I think we’d just like more and more people to find out about us really and to come and visit, so they can share the joy of being surrounded by beautiful books too and take a little piece of it home with them.”