Leicester’s Old Town has seen a significant transformation from the late 80’s over the last few years. The latest addition as part of Leicester’s re- development scheme was the expansion and reformation of Silver Street that was recently completed after beginning work in early January 2013.

With the grand opening of the Shires in1981, later renamed as the Highcross Shopping Centre in 2008, Silver Street’s local businesses, residents and the general public admitted they began to feel the negative impact of The Highcross opening. The opening of The Highcross’ surrounding outdoor vicinity attracted masses of people and captured the businesses of a new generation. Silver Street businesses to some extent suffered with the modernity that was being represented elsewhere in the city. They identified that change was a matter of urgency when trade dropped dramatically as soon as the Highcross opened. However,  like Silver Street, Guildhall Lane looks set to re-establish itself as a celebrated focal point of Leicester’s heritage thanks to the £500,000 revamp which was first proposed this June. 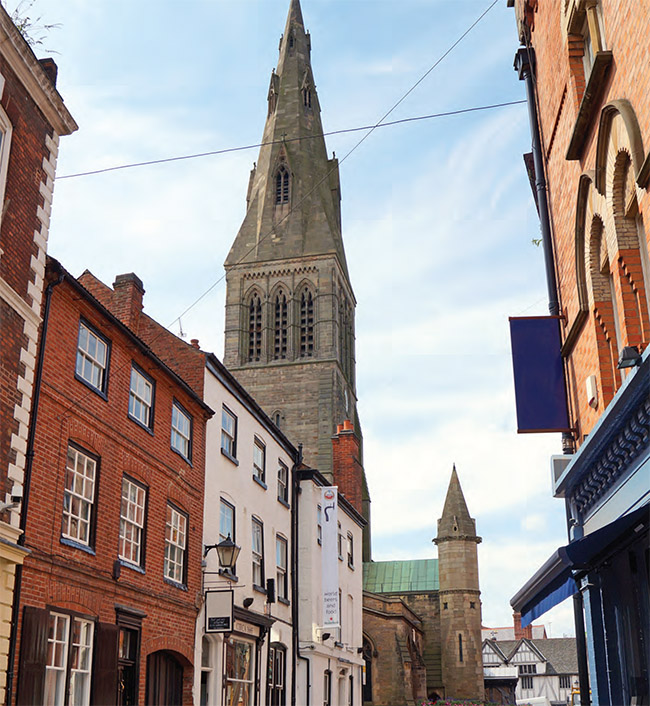 Local citizens suggested last year that the change may have come a little too late. The recession caused major implications to business trade, but it is within the idyllic lanes of Leicester that trade has managed to survive. The Lanes’ provides a heritage and community that reveals Leicester’s true spirit. Speaking to shop owners of the newly fashioned Silver Street there seemed an undoubted belief in each other and a united presence between the local independent businesses. There was no competition drive or sales ploys, the owners of businesses in this area evoke a friendly and happy community which is what Leicester is aiming to capture with their re-design and accessibility. The City Council have categorized this project development as part of their Connecting Leicester scheme. Through extensive work, this major programme aims to improve the pedestrian links between Leicester’s heritage sites and historical buildings whilst creating access to the retail shopping  at the heart of the city.The pedestrianised  area is famous for its independence. The independent boutiques and quaint one-off shops steer away from corporate multiplicity and offer a unique shopping experience with shops such as Lisa Boutique who have regular clientele with personal recommendation  given to each individual. Business owner, Lisa Myatt said “We cater for all, we stock individual looks from labels such as ‘Postcard from Brighton’ and try to capture an individual look from ages 20 right up to those in their 70s. We display a very on trend look and aim to keep bigger and older women looking fashionable and fresh. I’m hopeful that the revamp will bring a lot of people from elsewhere especially with the discovery of Richard  III. We do have regular clients and I’ve noticed we’re getting more people from all over and getting even busier in such a short space of time”.  In a highly populated city with an abundance of choice the secret gems of Leicester’s Lanes have managed to fight chain store sales with their marketed Christmas events. The shops collective figures reflected in last year’s sales have shown the businesses of Silver Street remaining in a good place with a steady turnover. They believe the ability to stay afloat during such an economical struggle is due to their loyal customers  and more personal service they offer. This year, there’s a new reason for visitors to gather, an even bigger expectation for a rise in sales and better opportunities for smaller developing businesses in the area.The discovery of the remains of Richard III in September 2012 has turned Leicester’s widely known local heritage into an overnight National Royal Heritage. The opening of the Richard III exhibition at the Guildhall brought visitors from all over the country who were eager to be part of the Royal phenomenon.  With the huge conflict of burial rights and the transference of Richard III’s remains, it has always been in question as to how sustainable this exhibition is. However, the breath-taking ‘Search For a King’ story has wowed the nation and generated a huge amount of publicity. The change to the remainder of Guildhall Lane may finally bring the development of the Old Town full circle.

Major changes to Guildhall Lane included levelling the pavement to match that of Silver Street and the surrounding Lanes. The pavements will appear transformed by the use of high quality pink and grey block paving, with a contrasting colour block to replace the once raised kerb. The brightly coloured finish of red asphalt will complement  the regal and traditional area of the city centre. The richest parts of the city are the rural vintage buildings that are often masked by the highly developed retail centre. City Mayor Peter Soulsby said “We want to carry this through onto Guildhall Lane and improve the condition of road and pavement surfaces, which are currently very uneven. By continuing the design of Silver Street, we can further strengthen the link between  these two areas and help attract even more people into the architecturally rich, historic heart of our city centre.”

This revamp is set to restore the remainder of the city that was left in ruins. The completion of the scheme will complement  the improvements that have long been underway for neighbouring Applegate and development plans for the Cathedral Gardens and Jubilee Square. Mayor Soulsby continued “The improvements on Silver Street are very clear.  It looks better and the surface is much improved. As well as being a really attractive shopping street in its own right, Silver Street now acts as an inviting gateway into the ‘Old Town.’

The City Council are striving to recognise projects in the area that are in need of re- development, in order to improve the overall atmosphere of the community and not just for the potential title of ‘City of Culture’ in 2017. The true spirit of the city speaks for itself both through its heritage sites and modern businesses and it is the pedestrian links between the two that will make it accessible to everyone in the local and wider community. The opening of the Richard III Visitor Centre in early 2014 is hoping to attract 100,000 people and bring in over £4.5 million of the city’s economy in its first year alone. More jobs, more things to do and more access to the things we want to do means Leicester is raising the bar and bringing back the culture which has always been at the heart of the city.