It was a blustery day in January when I got to meet with one of my greatest idols and listen to the most soothing voice of all time: Sir David Attenborough. As we sat down to begin the interview it gradually became apparent that this would be less of an orchestrated interview but rather half an hour of storytelling and history lessons.

Sir David expressed his passion for naturalist studies and his love for planet earth with great enthusiasm and artistic expression; it was as if every word he said and every opinion he had resonated deep within him, it is no wonder that this man sat in front of me had recently been crowned Britain’s Most Passionate Person of 2016. 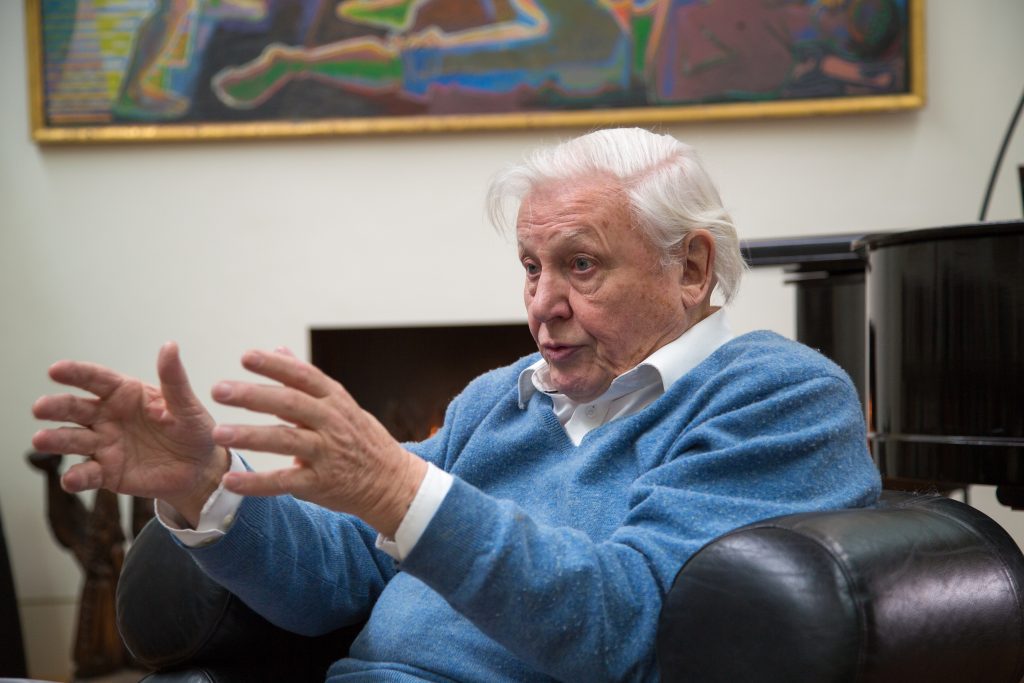 Before I continue to waffle on and lose myself in admiration I should introduce Sir David to those of you who may not necessarily know of him. Sir David is a broadcaster, naturalist, campaigner for all things green and the father of modern nature documentary. He began his career at the BBC where he launched Zoo Quest and was made controller of BBC Two in 1965 and later made its programming director.

The nature lover has written, produced, hosted and narrated countless award-winning nature-focused programs and has devoted his life to celebrating and preserving wildlife. Some of his most famous work includes documentaries such as The Great Barrier Reef, The Hunt, Frozen Planet, Planet Earth and The People of Paradise. His voice has become that of great significance with its relaxing tones recognised by millions from all over the world. He’s been commended with several outstanding achievement awards over the years including 2 BAFTAs, an RTS award and an NTA, among others. But yet, although decorated with titles, honours, and awards, the gentleman is one of the most humble individuals I have ever had the pleasure of meeting, and it is for this that so many of us adore him.

Sir David was born in West London on May 8 1926 but was brought up in College House on the University of Leicester campus where his father was Principal. During his youth years in Leicestershire Sir David spent it collecting and searching for fossils, stones and many other natural specimens in our quarries. When I asked Sir David what his fondest memories of his childhood were he was extremely humble about what he described as his ‘lucky upbringing’: “All children are interested in nature, I don’t see myself as an exception. In the days before television one went out in the countryside a lot, and it was possible in the thirties when I grew up in the college house to be in the countryside within minutes; and that’s where I used to go.

The countryside for any child is full of interesting things, and the great thing about Leicestershire particularly on the eastern side is it is full of fossils, wonderful fossils, beautiful fossils, and so that is what I spent my childhood doing: searching for and discovering fossils.” 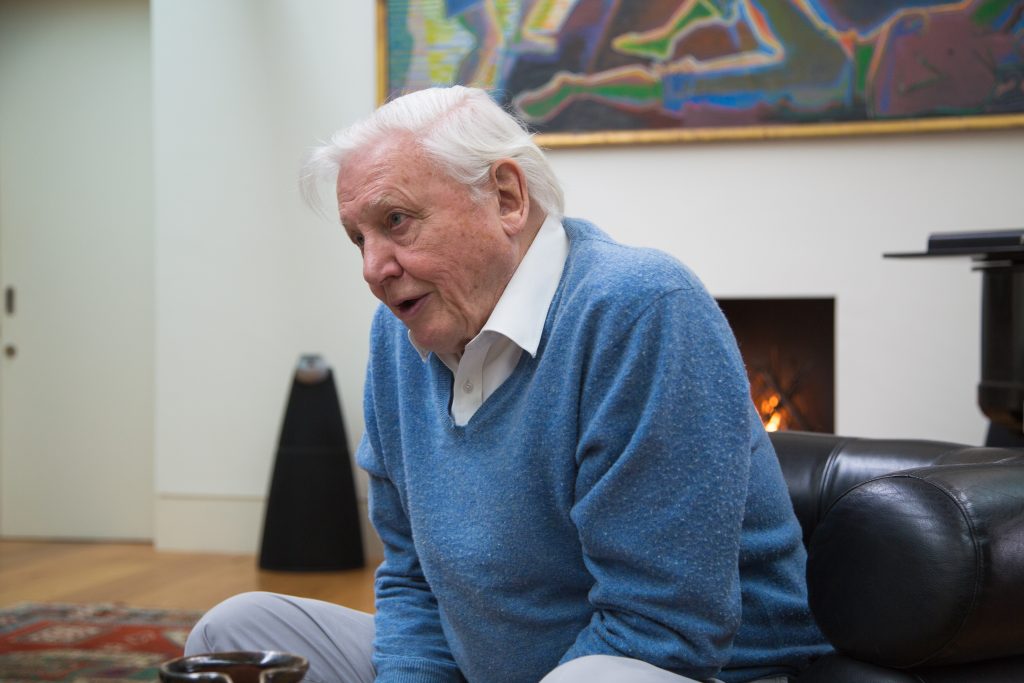 Sir David’s most recent visit to Leicester was at the end of January when he officially opened the Attenborough Arts Centre extension which was championed by his late brother Lord Richard Attenborough. It was during this visit that he conducted a lecture named Beauty in Nature to the people of Leicester. Those that were lucky to attend were rewarded with the chance to ask the naturalist questions and sit back and enjoy his famous narrative voice.

As we continued to reminisce over his childhood days it was clear that Sir David was a boy of the outdoors. We laughed about how he knew a shortcut to school which allowed him to leave the house only a minute and a half before the bell rang, and spoke about the numerous ways he learnt how to cook an egg on his travels.

Palaeontology was never a job for Sir David, he always treated it like a hobby rather than a chore. As I gazed around the room where we were sat I spotted several fossils dotted here and there, but the collector was quick to inform me that his house was covered in all sorts of interesting artefacts, but that the majority of the treasures he collected he had donated to the University of Leicester for their geology department shortly after leaving the city: “ I wouldn’t expect many to still survive as mine were badly prepared by a young boy, but it was useful that I gave such things to students so they could answer such questions as ‘Ok, what is that?’ but the pleasure of finding fossils is a huge thing!

“It’s very romantic! In the quarries you quickly learnt that there were certain shapes in the rock that indicated there was a fossil inside, and you learnt which way it would split once you hit it with a hammer, and there would be this beautiful fossil – you were the first person to ever see it, it could be completely new science and it hasn’t seen the sunlight for possibly 150 million years. That is remarkable isn’t it?”

As you can imagine, what accompanies a natural history broadcasting role is travelling, and Sir David has certainly ventured the globe. Whilst he was reciting each country, state, and ocean he has explored I was taking mental note of everywhere he had ever travelled, envious of all the exotic destinations. There is one place however that Sir David has always wanted to visit: “I would love to have been to the centre of the gobi desert because it is full of fossils (he laughs), but there is not a lot of animals there which is one of the reasons the BBC have never sent me there to make a film. You can go for days without seeing a single living creature which makes it hard work for a natural history filmmaker.”

One of his most recent travels was to Patagonia to film the extraordinary documentary Attenborough and the Giant Dinosaur which was televised on our screens back in January. The Titanosaur was the hot topic when we met and he told the story of discovery in eloquent fashion, but it was his next project that the naturist was particularly excited about: Light on Earth on bioluminescence. In the build up to his birthday the BBC are releasing several documentaries to commend Sir David’s dedication to the public news station. One will be on his work within natural history with a look back at his extensive work at BBC and the other is Light on Earth. 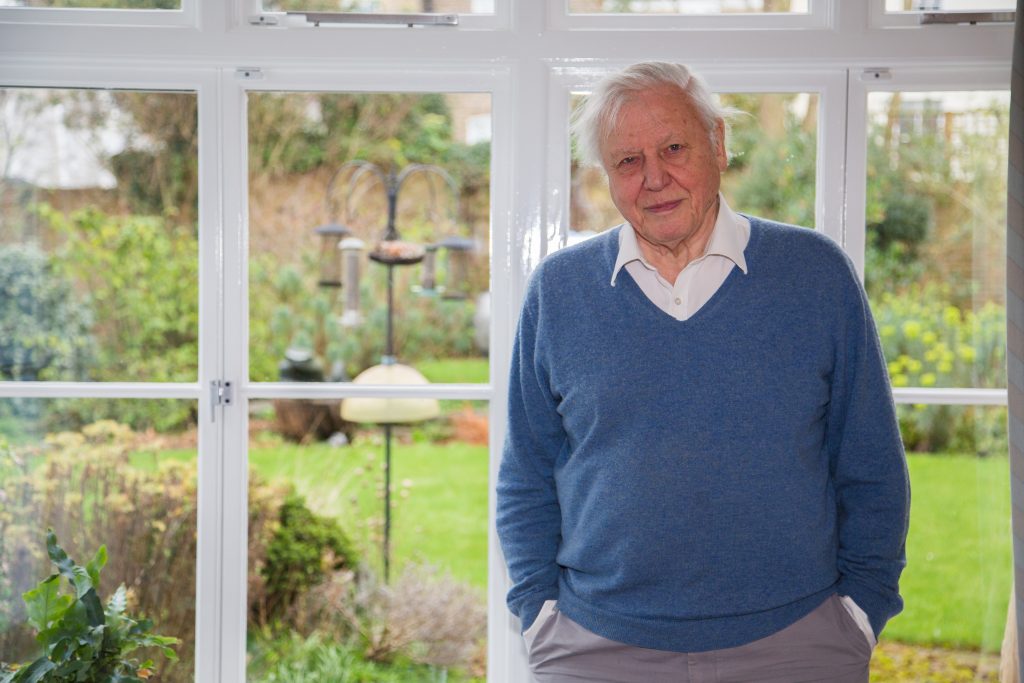 With the development of technology taking such a drastic and phenomenal journey in recent years, Sir David has welcomed and encouraged new and innovative methods to improving the way we can capture and complete scientific discoveries.

In February the great scientist was involved in a 360 degrees virtual reality project that transports you into a prehistoric world – I highly recommend that you give it a watch if you have not yet. These ever developing technological advances allow Sir David to continue working on new and informative documentaries and film. He has recently worked on a film that looks at plastic and how it is affecting our wildlife.

When I asked Sir David about his opinion on this matter he described its extremities: “The opening shot is of this beautiful albatross, and it is coming back from having spent a couple of weeks flying around the Antarctic ocean catching food from the surface of the sea to bring it back to its baby which needs feeding for a year before it can take flight.

“So this wonderful bird rears up and opens its beak to get its food but what comes out of its parent’s beak is plastic. This poor chick gets a belly full of plastic with no food in it at all.” 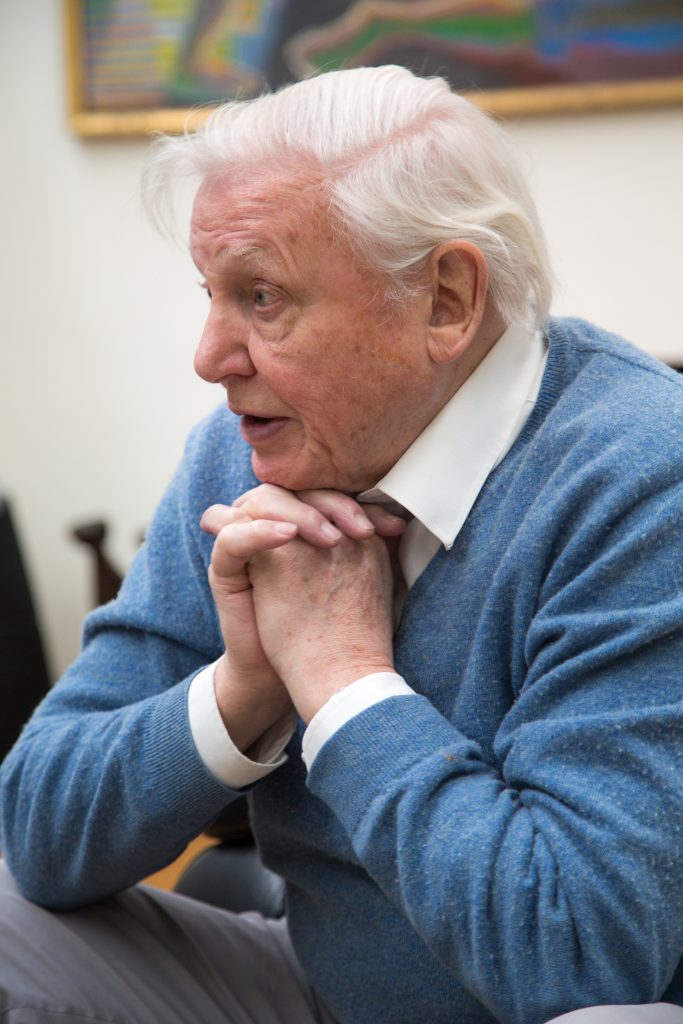 Engaging Sir David’s thoughts and opinions on such harrowing topics such as our current polluted state did not take much persuading and it was very apparent that he, above anyone, is scared for our future: “We are dependent upon the natural world for every mouthful of food that we eat, and for every breath that we take. The human race has become so numerous that we are swamping the natural world and in doing so we are endangering our own future. All we can do is go on helping people understand what the problems are. 50 years ago people were still thinking that individuals who talk about nature conservation just want to protect a wood, they are nice people but they don’t live in a real world. On the contrary, we are living in the real world and it is the people that take no notice at all that are living a fantasy.”

Following my meet with Sir David I returned back to my home county of Cornwall and it was clear to see just what he was expressing: mountains of plastic, rubbish and netting were swept up on the shores, it really is the time if not before to start changing our daily habits and save our own existence as well as our natural world.

Happy Birthday Sir David, we hope you enjoy spending time with your family and friends, and from all of us at Pukaar Magazine we wish you many more happy and healthy years.