We can barely believe it ourselves – it’s been five years! All this time spent editing, photographing, writing and then doing it all over again in an excitable frenzy. In our elation about the success and brilliant fun we have had in this time, we’ve decided to wrap up some of the fantastic people we have met, the brilliant team we have worked with, and the stories we have featured which have made Pukaar Magazine exactly what it is today.

Of course the first person whom we must mention and of who we are greatly thankful for supporting and driving us is Romail Gulzar, publisher and sales executive of Pukaar Magazine. On discussion with Romail he expressed how proud he is of the magazine and it’s progression, “We have had enormous amounts of help captivating this with our editors throughout it’s time, who we must thank for everything they have done, especially the first editor Kelly Pipes who supported me throughout the initial production. Praise should also be given to all 50 writers who have previously done work experience with us and have contributed massively.” 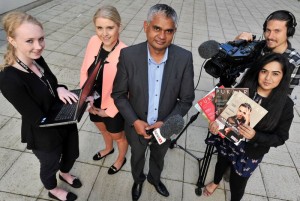 “What makes me proud is how much we have helped young people gain the skills they need to get into the industry. We offer work to local aspiring journalists as well as 12-month internships to individuals hoping to get into editing careers, which can be extremely difficult to get into. During the years we have seen many faces come and go with the magazine that have all left their individual marks. Magazines are a labour of love.”

Pukaar’s business moral focuses on providing editorial experience to individuals hoping to crack into the industry, and this is the reason that we offer these 12-month internships. Our first editor was Kelly, who although was sceptical about developing a magazine during a time in which print media was starting to fade; acknowledged Romail’s optimism and journalistic desire to root out real issues of which brought the magazine to life. We created the magazine back in 2011 as we felt that there was a gap in Leicester for the celebration of diversity, which is the main objective of the publication. The combination of each editor’s dedication and Romail’s undefined passion has led Pukaar Magazine to thrive. Since Kelly we have seen a handful of extremely talented editors pass through the magazine, each adding their own flair to the publication, it’s design, and angle of content. We owe great thanks of course to our current editor, Imogen Harry, who has worked tirelessly in putting together this five-year landmark edition.

As well as the fantastic staff at Pukaar, something we can truly take pride in is our diverse range of cover stars that feature on the wall of our office, each and every one of them having an amazing and successful story to tell. Our first issue way back in spring 2012 featured middle-eastern star Dr. Halla Diyab, a writer of popular television dramas and a TV personality. From here we continued our legacy of featuring inspirational and motivational individuals with empowering stories with a further 17 cover stars. Anne Davies, Drew Sullivan, Sameena Ali-Khan, Rendall Munroe and Sam Bailey are to name but a few and all have held a strong connection with Leicestershire and its people.

We have been extremely lucky during our years and have had the opportunity to cover some incredible stories. Ofcourse one story that truly encaptured the heart of the city was King Richard III. Within our spring edition of 2015 we produced a wide range of coverage on the events, reinterment, and took a step back in to our city’s history which was astonishingly insightful and a moment of last year that all of Leicestershire shall never forget. We tell stories of success: Annie Zaidi’s story, the female Asian football coach who has been enlisted on the Independent’s list as a person to watch in the fast lane. We also tell stories of sorrow. However, we mainly give a voice to our community, and take pride in recognising those that are an inspiration to others such as classic Indian and contemporary dancer Aakash Odedra and actress Terri Dwyer. All of our articles have aimed to contribute positively to Leicester’s community, as well as providing a truthful, colourful representation of our society. 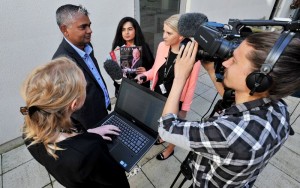 Throughout our half-decade we have developed and grown as a brand thanks to peoples continuous support. Aiming to never keep each issue the same; we have worked closely with amazing design teams to produce a fresh look with each edition without shying away from aspects that have been loved by others.

Overall, it’s been a fantastic five years for us here at Pukaar. We have grown with our goals, our stories, and we have hopefully contributed something new, diverse, and rich into print media that Leicester was missing before. At the young age of five we have already had such a crazy journey, and all we can say now is here’s to another fantastic five years, and thank you to our audiences for sticking by us as your local source for all things Leicestershire.

We would like to give special thanks to the companies who have helped Pukaar over the years: Curve Theatre, the University of Leicester, John Lewis, Adanand International and Crimestoppers to name but a few.