Feature writer Sally Jack investigates the issue of homelessness in Leicester and visits some of the projects in the city, which aim to help those without a home get the help and support they need to gain independence and a new start. 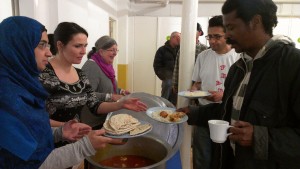 This month you can choose only one of the following: pay your rent, pay your bills or buy food for your family. This is often the dilemma faced by people from different backgrounds who, for a wide variety of reasons, find themselves in danger of losing their homes. With cuts in council services of £2.2million to be made by 2015, proposed changes to the welfare system such as the controversial bedroom tax and private property rentals up by 69 per cent since 2003, an increase in homelessness seems inevitable.

There is a saying: we are all only three payslips away from homelessness. For many people, including myself their only experience of homelessness is buying a Big Issue, and whilst I usually stop for a quick chat with the regular seller on Market Street, I had no real idea what support services are available in Leicester.

Debbie Hughes volunteers with Leicester charity Action Homeless. She said: “When I first started I found it really hard to talk to the service users as I didn’t know how to relate. Through volunteering I realised they were people just like us.” Debbie spent a night sleeping rough in February 2012 with volunteers from both universities in Leicester.

“It was freezing, I hardly slept. I wore layer upon layer and the ground was cold and hard. This was still easier than what the homeless deal with as I could go inside and get food and drinks but in reality, living on the streets you can’t do that.”

Homelessness in Leicester reached crisis point last year, recording the highest number of rough sleepers in the country outside London. As a result Leicester City Council and agencies working with the homeless came together and formed the Homeless Leicestershire Partnership’s (HeLP) scheme, No Second Night Out. Led by Action Homeless funding was secured to help get rough sleepers off the streets and into secure accommodation before their second night out. Numbers of rough sleepers have now dramatically decreased from over 50 during 2012 to 11.

Another scheme, Eat ‘n’ Meet, was introduced three years ago by the Islamic Society of Britain (ISB) providing those in need with a hot meal and bags of essential food, toiletries and clothing as often as could be managed. Founder Salma Ravat said: “It was clear Eat ‘n’ Meet was a lifeline for many people. We wanted to provide a regular service and bring Muslim and Christian groups together so, with other faith groups we looked at the provision of services for the homeless. We realised there was a gap in what was available on a Saturday and approached the Near Neighbours Fund.

“They gave us a grant and in January 2012 the first Saturday Stop By was held in the Undercroft at St James the Greater Church on London Road.” The centre is open from 11am – 2pm every Saturday and provides tea, coffee and a hot, nourishing meal. There are also opportunities to play board games, table tennis and pool. 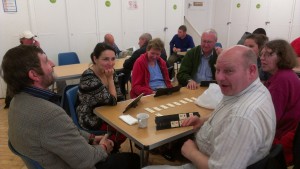 Salma explains why this is important: “Recreation is a way of combatting the social isolation these guys experience, allowing service users and volunteers to socialise and interact with each other. Our volunteers come from a wide variety of backgrounds – doctors, professors, students, housewives and teachers, but are all there working together.”

Saturday Stop By has up to 60 service users every week, from street homeless, ‘sofa- surfers’ and the vulnerably housed (those leaving care, prison or the armed forces). The ratio is five men to every woman – the council has a statutory duty to house children therefore it is more common for single males to end up on the streets. Salma and her team get to know their regulars and together with other agencies in the city are now able to identify those new to the streets and help them find the services they need.

Saturday Stop By is one of several projects run by different organisations providing vital services to vulnerable people. But what about long term solutions to tackle the causes of homelessness and avoid the ‘revolving door’ cycle of individuals moving in and out of hostels and the streets?

A 2012 survey among employers by Apex Works revealed 88 per cent would not employ anyone who was homeless, although 21 per cent acknowledged homeless people might have useful skills.

Down Not Out (DNO) is a community news agency run by people with experience of homelessness and housing issues. Founded in January 2012 with Lottery funding and in partnership with Citizen’s Eye and Action Homeless, DNO aims to train others, raise awareness via their own reporting and activities and provide advice to those in vulnerable housing situations.

DNO operates a media skills training programme and editor Mags Scrag and her team welcomed me to one of their weekly meetings. Adam Perry from the Media Trust was leading a session on conducting a video interview and everyone had an opportunity to use film and recording equipment. Valuable skills such as photography, creating magazine and web content as well as interview techniques and practical skills with equipment are learned and shared.

Although this begins as a voluntary activity, five individuals have recently been taken on as employees working set hours per week. Ken volunteers with DNO. When asked about the project, he said: “At the beginning I was quite shy, I had been made redundant 18 months ago and this really knocked my confidence. Since being involved with DNO I have felt much more able to get involved in new areas of work, I’ve showcased my poetry and am now getting involved in interviewing and filming skills.”

Nathan Human of Citizen 598 Theatre Company assisted DNO with a long term documentary film making exercise. This in turn has inspired a new project. He said: “The success of Mr Stink may seem harmless but to me it reinforces misconceptions about homelessness – homeless people have dogs, homeless people smell. This began to concern me more and more and the seeds for Home Truths had been sewn.” 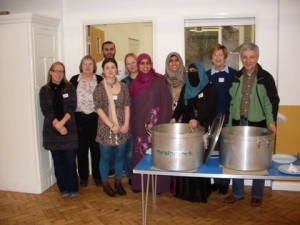 Many service users have had the chance to refresh skills from their lives before homelessness. Stephen has been attending DNO sessions: “When I met the DNO team I was at an all-time low. I was asked to write about my interests that at first was really difficult as it was a reminder of a life I no longer had. Through talking with the team they renewed my confidence levels and openly encouraged me to pursue my interests again and I have now taken steps to do this”.

Home Truths is a collaboration between Citizen 598 and Action Homeless. In a series of workshops, homeless people told their own story about their experiences using the Arts
in a public exhibition at LCB Depot in March. Nathan continues: “The impact of creative thinking can be hugely inspiring and provide an outlet for self-expression as well as a skillset for potential employment.” However, Nathan has learned lessons himself: “I’ve learnt again and again that some things take time and we could benefit from long term planning and not short term ‘cover it with a plaster’ fixes.”

And long term planning is currently underway. The city council’s consultation period for Leicester’s Homelessness Strategy for 2013 – 2018 ended in February and by October it
is expected the full impact of both national welfare reform and cuts at local level will be known. From these cuts the council predicts a 19 per cent rise from 2010/11 in households facing homelessness.

There is no doubt the coming months will place additional pressures on many people. Homelessness can happen to anyone and, despite common misconceptions, a homeless person does not fit a stereotype. However, what has struck me most since looking into Leicester’s handling of this issue is how well the many different agencies involved all work together, helping those without a home find shelter, support and opportunities for the future.