High Sheriff Gordon Arthur was born in the Sudan before moving to his mother’s roots in Essex in 1954.

Having studied law at Cambridge University and qualified as a solicitor, Gordon lived in London where he met and married his wife Janet before they moved to Leicestershire in 1981. He became a partner in Leicester firm, Harvey Ingram (now part of Shakespeare Martineau). 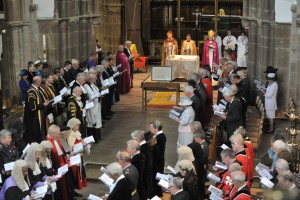 After retiring as a solicitor in 2013, Gordon went back into education and studied for a postgraduate diploma in Inter Religious Relations at the St Philips Centre, accredited by De Montfort University.

On April 7th 2015 he took up his one-year appointment as High Sheriff of Leicestershire. He was nominated five years ago by a previous High Sheriff, his name was then considered by a scrutiny panel and finally he was appointed by the Queen back in March.

The office of High Sheriff is the oldest secular office under the Crown, over 1000 years old, and the post has seen a great deal of change over the centuries.

In the early years the Sheriff was responsible for maintaining law and order and governing the county on behalf of the king, but from the 13th Century onwards different offices have been created that have taken over nearly all of the tasks originally performed by the Sheriff.

Now more of a ceremonial role, the one-year office has three distinct remaining duties, one: to welcome and entertain a High Court Judge when he or she comes to Leicester, two: to act as returning officer in a county constituency, and three: to proclaim the successor when the monarch dies (although of course this has not happened since 1952).

In recent years the office has been largely reinvented so that the Sheriff is now mainly occupied in visiting charities and organisations to learn about and recognise their work.

One of Gordon’s aims is to try and increase engagement between city and county: “The old division of rural county and industrial town is still there but that has been supplemented by the new populations in Leicestershire that represent different ethnic and cultural backgrounds.

“I have a particular interest in trying to help bridge these divides whilst learning more about the diverse society we all live in.

“There is only so much you can do in 12 months but I hope at least to have raised the profile of the office, particularly in the city, so that more people have heard of the High Sheriff and hopefully know a little bit about what the Sheriff actually does to help develop community cohesion,” he said.

“Although it’s a traditional and formal role it is also a personal one and therefore each Sheriff has their own particular emphasis. One of my initiatives was to set up a High Sheriff of Leicestershire website.

“This was by agreement with my two successors and they will be able to develop it further as a tool for increasing awareness of the office of High Sheriff.” 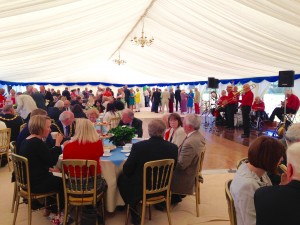 The 800th anniversary of the Magna Carta in 2015 blessed the High Sheriff with several opportunities to celebrate the document with the greatest influence upon his office.

During May he was part of a group from Leicester visiting London to celebrate the 800th anniversary of the day when the City of London joined the rebel barons, being the pivotal moment which forced King John to negotiate.

Gordon also represented Leicester at the official ceremony at Runnymede on the actual anniversary date of June 15th.

Besides attending many events, Gordon has also organised and hosted events of his own, including a teatime reception in July for a wide range of people from all over the city and county and other events to raise funds for charity.

He was particularly pleased to use the Magna Carta anniversary as the theme for a major Justice Service attended by over 500 people. All these events have been aimed at building bridges between local people.

When asked why he held such events Gordon said: “I believe that one of the most worthwhile things I can do is to enable people from varying backgrounds and interests to meet one another.”

Having three children that have all flown the nest, Gordon and his wife Janet, enjoy country life, walking their dogs and swimming before breakfast in their open-air pool: “With my office only lasting 12 months I am trying to pack as much as I can into each day and therefore I do not get a great deal of free time at the moment, but when I do Janet and I enjoy going to Curve as we are very lucky to have such a vast range of artistic talent in Leicestershire.”

2015 has been an important year for Leicester and Leicestershire.

With the reinterment of King Richard III and the three Rugby World Cup games, Leicester is now an international household name, and Gordon recognises the vast benefits that hosting such spectacles has brought to the county: “The events of 2015 have brought many visitors to Leicestershire and have really put us on the map. Leicester as a city seems to have more confidence and its economy is clearly booming at the moment.”

Along with the duties of office, Gordon is a trustee of the Leicestershire Victoria County History Trust and the St Philips Centre in both of which he invests a large amount of his time.

A charity that all High Sheriffs of Leicestershire have supported for many years is Warning Zone.

This is a learning hub for children to visit and learn about the risks and dangers associated with the world we live in whilst helping them make good judgments and decisions in response – the recent opening of the new E-Safety Zone has been an exciting new development.

The ceremony will be held in the Council Chamber at the Town Hall. 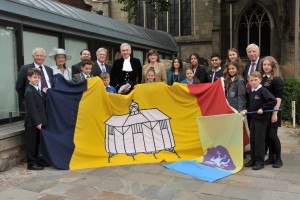