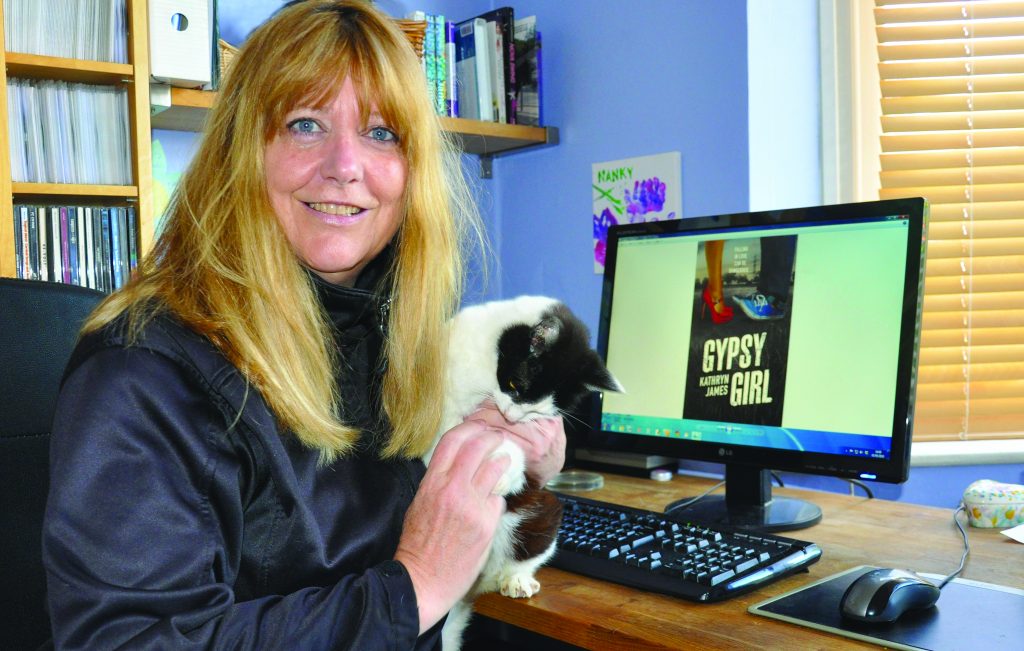 “Enthusiastic, determined and good fun” is how Leicester born author Kathryn James describes herself as we
sit down for an interview ahead of the release of her sixth book Gypsy Girl.

For eighteen years Kathryn worked with gypsies and travellers in Leicester after setting up a company with her friend Mandy to offer them a range of courses including literacy and photography classes, play schemes, nursery classes, driving theory support and video and photography sessions.

Finding a niche in the market she chose to focus her latest novel on gypsies and travellers by drawing upon her own personal experiences of working with them in their own environment.

“You don’t get many books about them; you very rarely get a gypsy heroine, they don’t see themselves in books. I think the fact that I write about gypsies and travellers does set me apart. A lot of people don’t know them, they’re secret people.”

Kathryn’s passion for writing began from a young age, but since then she has lived a colourful life by undertaking a variety of jobs including running a scuba diving centre in Malta, running a cleaning company and even a job buttering bread, as well as being a full-time mum to her then young sons. But deep down she always wanted to be an author, “I was writing all the time and had done some work writing for Funfax, for Dorling Kindersley and after that I worked for a local video production company, writing scripts aimed at teenagers and children at school, focusing on things like road safety. So even though I was writing scripts, you could see what sort of books I probably would end up writing.”

Her passion and persistence saw her achieve her first book deal at a later stage in her life, “I was in my late forties and suddenly thought; no I’ve got to do this. I’ve got to get on and write this book, so instead of doing my normal writing a few pages and forgetting about it, I wrote the whole book and thought right I’m going to get myself an agent. When I went to the first meeting with my publishers, I thought I’d be the oldest there, I thought it’d be all young people, but no way, a lot of them are my age and it felt brilliant. It takes people quite a while, before they’ve got the story to tell.” 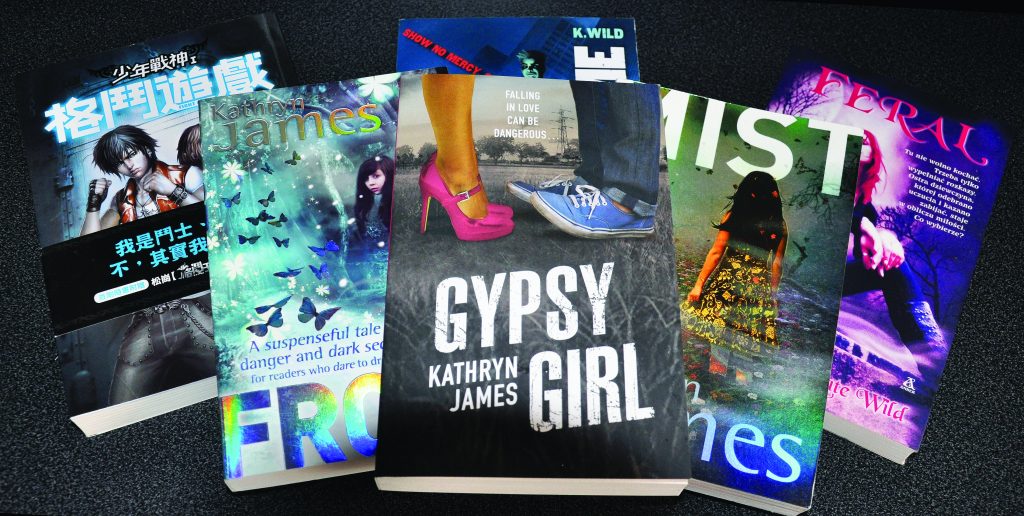 Her first book Fight Game was released under her writing name of Kate Wilde in 2007 and was followed by the release of her second book Fire Flight. Both books were sold in 6 countries around the world, aimed at 9–13 year olds. Kathryn then went on to write her third book, a dystopian novel titled Feral, “It was about the future and about a girl who from birth was trained to be a fighter. It didn’t sell in England, but did sell in Poland. So I’ve got a book out in Poland that’s nowhere else, that sells quite well.” Her fourth and fifth books Frost and Mist are for young adults aged from 12 to 18.

Describing what makes her writing style different from others she shares; “I’m not a flowery writer, I write slang, I write as my character speaks, so they’re quite easy to read. I make sure that my chapters are short and that they’ve got a really punchy ending, so that my readers want to turn over and read another chapter. There is sort of a theme that runs through my books and one of the themes is definitely fighting and the fact that I want to write about gypsies.”

Sharing more about her latest novel, she explains the inspiration behind the main character, “Sammy Jo is a feisty heroine, I love feisty heroines, I love kick-ass heroines and the sort of girl that doesn’t wait for her boyfriend to save her, she just saves herself. So she’s a family loving girl, loves to wear high heels, loves to have her hair done and loves to dress up, but can also fight and I think this is the two characteristics I got from the gypsy girls that I worked with. They’re very, very tough, it’s a very hard life that they live, it’s a very outside life.”

Speaking from experience, Kathryn shares positive advice for aspiring writers, “Don’t give up, the one thing that amazed me was that when I signed my first book, it took about twenty years to get signed, so if anyone is reading this and is thinking ooh I wanna be a writer, take it from me you have to persevere, you very rarely get anywhere on your first try, but you’ve got to keep on going, if you’ve got a book inside you, eventually it’ll come out.”

When she’s not at her desk penning her latest novel, Kathryn can be found in her garden looking after her hens, “I’m really concerned about hen welfare; I think they’re treated abominably, I would love a bigger garden, because I would like to rescue ex-battery hens.”

Looking ahead to the future, the inspiring author revealed that she is currently working on the first draft of her next book Gypsy Girl 2, which is due out later this year. “I’m also working on a book called Lock In, which is about a school invasion by terrorists and that’s totally different from anything that I’ve written before, but it is still in its synopsis stage. I might think about writing an adult book, so who knows, I might change genre, you tend to go up in age rather than down.”

COMPETITION!
Win a signed copy of Kathryn James’ latest book Gypsy Girl
Just answer the following question correctly for your chance to win!
What is the name of Kathryn’s first book?
A) Fire Flight
B) Fight Game
C) Feral
Send your answer along with your name and contact number to info@pukaarmagazine.com with “Kathryn James Competition” as the subject. Closing date 10 August 2015.