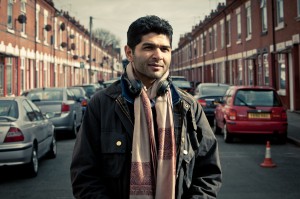 How did you get into writing/directing?

I’d always loved films and theatre. It was only after completing my history degree, having spent most of my time in cinemas, that I realised I wanted to pursue this professionally. I then went to Central School of Speech and Drama to do a Masters in Advanced Theatre Practice. After leaving Central I wrote my first full- length play Touch, which was one of the winners of the Royal Court Young Writers’ Competition. That got me some attention and importantly an agent.

You actually grew up on Belgrave Road is this correct? What is it about the place that made you want to come back and shoot a film here?

Yes I grew up in Belgrave. I love the area and have great memories of growing up there. I’ve always come back, primarily to see my mother and eat her food, but also just to spend time there. Since I write about what I know it seems completely natural for me to make a film in Belgrave. It’s also an area where old India meets new Britain and to me that’s really fascinating.

What do you love most about the city of Leicester? 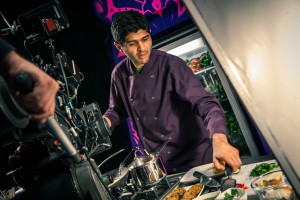 It’s multicultural Britain at its absolute best. I never think about the fact that when I’m in the city I walk past people of different ethnic backgrounds because it’s completely normal. It’s a city where you can eat some of the best Indian food in the world, watch the best rugby team in Britain and go shopping in a fantastic city centre – I still buy my clothes in Well Gosh, where I’ve shopped for twenty years.

I remember the National Front marches in the late 1970s and when I think back to that now, I know the people and city won. Leicester should be a template for so many other cities. I love the place. It’s my town.

Are the characters in Jadoo based on real people?

They are. They’re all based on a cross section of people I know or heard about. Go and ask people in Belgrave, I’m sure they’ll tell you things I don’t even know about the characters.

What are the audiences going to love about the film?

I hope they see people and a story that they recognise and so can connect with. I also think they might appreciate characters who aren’t stereotypical but feel real. I also hope they just find the experience of watching the film enjoyable and fun. It’s a feel good movie that should make you hungry with some fantastic performances and music too!

What sort of films did you watch growing up?

Where do I start? Off the top of my head – Sholay, Deewar, Amar, Akbar Anthony, Lahu Ke Do Rang, Teesri Manzil, Ram Aur Shyam… The Godfather, The Wild Bunch, Spartacus, Lawrence of Arabia, You Only Live Twice, Rio Bravo…. I really could go on and on.

My father. He was mad about cinema and introduced me to movies. 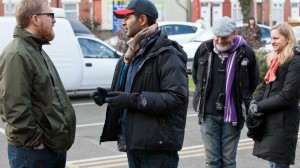 Do you have any plans to work in Hollywood/Bollywood?

Are you working on any future projects which you can tell us about?

I’m working on film noir/thriller in the vein of Jagged Edge and Les Diaboliques, and a period film set during the First World War. I also just read a fantastic novel, which I’m hoping to adapt.

Do you have any advice for aspiring writers and directors?

Do it because you love it and for no other reason. Watch lots of films. Never give up, it’s very hard to break in, but hard work does pay off.