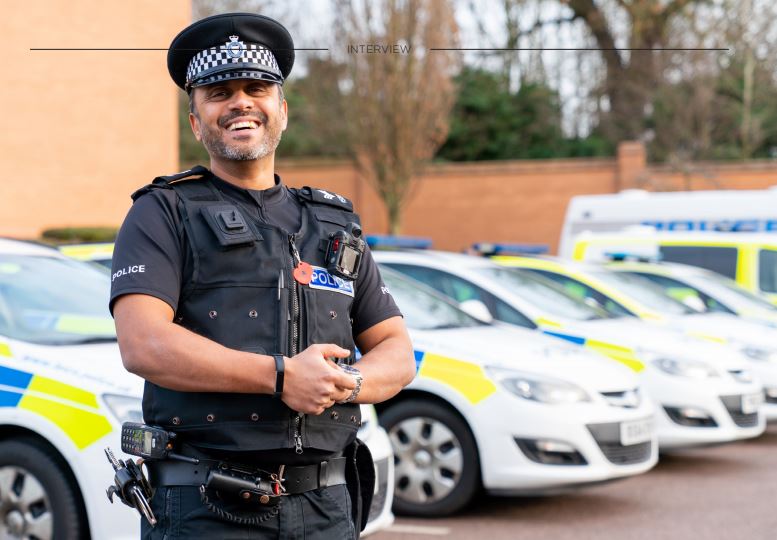 Leicestershire Police Inspector Yakub Ismail spoke to Pukaar Magazine’s Romail Gulzar about his experience joining the police, and his work as both an officer and as the chair of the Leicestershire Black Police Association.

Discussions of diversity and its preservation are often reserved for cultural areas of society, such as sport and entertainment. The topic is not often tackled in areas like business and public services, however, but it is no less important.

“It was a big culture shock. It was very different from Africa and where I had grown up. I came to the UK without an education. I had been through high school, but I didn’t get anything like A Levels or a degree. So when I came to the UK, at first I was employed in the textile industry doing factory work.” This was never planned by Yakub. For a majority of his life, he had wanted to join the police as the values of policing aligned with his own. “Wanting to help others, wanting to serve our communities, meeting different people—these aspects of policing excited me. In between working in the textile industry, I would always be visiting the job centre. One day, I saw a hand-written note on the notice board that said Leicestershire Police hiring police officers. My heart was beating fast and I was so excited! I told my partner at the time that’s what I wanted to do. And so the journey started.”

During his training, Yakub learned all there was to know about being a police officer and how to serve his community to the best of his ability. He has also now earned an MSc in Police Leadership Strategy and Organisation.

“People do like the police.
I believe we have trust from our communities.”

It’s important to remember that behind the badge, there is a person. No matter their profession, officials, especially the police and others in the public sector, can often be perceived as intimidating and just different. Yakub Ismail exudes kindness in a very endearing and approachable way.

He has a deep love for the city of Leicester due to its multiculturalism, and it shows. Yakub feels that good intentions and love towards the city and people of Leicester pays off. “People do like the police. I believe we have trust from our communities. In general a majority of people are quite comfortable and open and willing to talk to us and they engage very well. There will always be a few that want to run from us and our challenge there is engaging them.”

Inspector Ismail always plays a vital role in diversity and inclusion within the force. He chairs The Leicestershire Black Police Association, which was set up to ensure that all officers and staff from ethnic backgrounds were properly looked after and considered. This association was formed to build stronger race relations between the police and the community; to take care of members in personal and professional situations; and to assist the Leicestershire Police as a whole in the area of recruitment and increasing the diversity of the team. Yakub said: “We believe, as members of the Black Police Association, that we are both the voice of our community within the Police, and for the Police in our communities. We can act as a critical voice within our organisation to help make things better.

“For some, the name of the organisation can be a bit misleading. We are a support network that is there for BAME support staff and officers. That includes Asian, Eastern European, Gypsy and Romany traveller communities—we are there to provide support for all ethnic minority groups.”

When asked about the need for these associations in what is sometimes falsely perceived as a time where equality has never been better, Yakub said, “What we bring is a lived experience—a cultural experience. We help to break barriers and create links within our communities and vice versa. We help to give a voice to those who may not have the confidence to come forward and say things—we become a conduit for our members.

“As an example, in 2020 we had the Black Lives Matter protests and vigils in Leicester. As a black police association, because of our links and relationships with our communities, we were able to understand what the issues were, the significance, and were able to bring that cultural perspective into Leicestershire Police. That way, we could all design a policing style that was suitable for those protests and vigils.”