A UNIQUE AND PRICELESS PRAYER BOOK OWNED BY KING RICHARD III IS COMING TO LEICESTER. THE DECORATED MANUSCRIPT, KNOWN AS THE BOOKS OF HOURS, WILL BE ON DISPLAY IN LEICESTER CATHEDRAL FOR THREE MONTHS AS PART OF THE EVENTS SURROUNDING THE REBURIAL OF THE LAST PLANTAGENET KING OF ENGLAND, WHO WAS KILLED IN BATTLE OVER 600 YEARS AGO 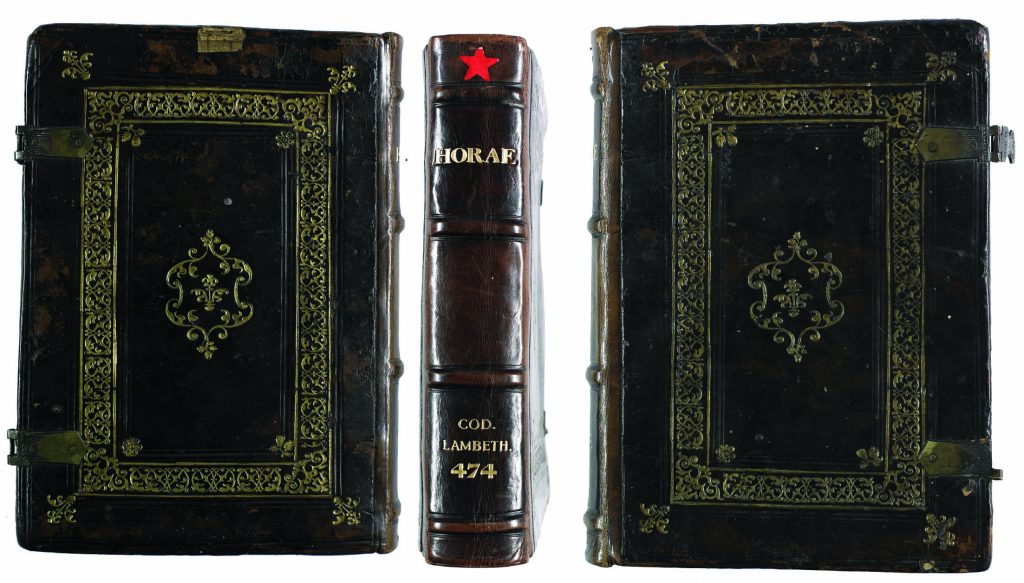 Archaeologists discovered the grave of King Richard under a car park in the city centre in August 2012. DNA analysis conducted by Leicester University, using two of the monarch’s direct living descendants, identified beyond doubt that the skeleton found in the shallow grave in the chapel of what was once Greyfriars Friary, was the man killed in battle at Bosworth Field on August 22 1485. The king’s remains will be reburied in Leicester Cathedral in March this year, at a ceremony attended by the Archbishop of Canterbury, the Most Revd Justin Welby and other church and faith leaders. King Richard’s Book of Hours will play a prominent part in this unique ceremony. 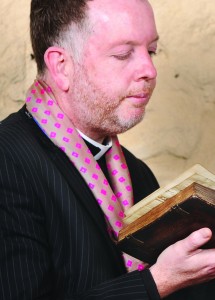 This hand written Book of Hours was not produced for Richard, but he made it his by hand writing his date of birth on its pages and the volume includes a prayer used by Richard seeking deliverance from various forms of affliction, sickness and danger. King Richard had his prayer book in his tent on the eve of the Battle of Bosworth. After the battle, the book was retrieved by troops of the victorious new King, Henry VII who returned it to Richard’s mother, Cecily Neville.

“This is a uniquely valuable item and we are honoured to have been entrusted with it as part of the ceremonies planned for reburying the king,” says the Dean of Leicester, the Very Revd David Monteith. “Religion and faith were of paramount important to the people of his age, and his manifest attachment to this book shows that Richard took his faith extremely seriously, both as a man and as divinely- anointed King. He went to his death with the Book of Hours in his possession.”

This very special volume is part of the collection held at Lambeth Palace Library and has seldom been allowed out on public display. For three months from March 22 members of the public will be able to see it for free at Leicester Cathedral in an environmentally controlled case, near the new tomb of the King.

At the end of the 15th century England, along with the rest of Europe, was a Roman Catholic country led spiritually by the Pope from Rome. Prayer books, known as Books of Hours, formed an important aspect of devotion for educated people in the mediaeval period. The books included a series of prayers to be recited at specific hours of the day, paralleling the services recited by monks, nuns and the clergy. “The spiritual thinking was that this helped the lay people to unite their prayers to the church’s devotions,” says the Dean. 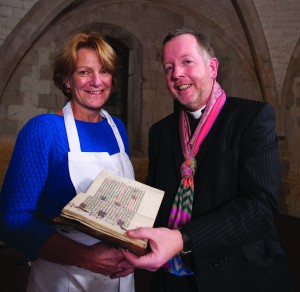 King Richard’s copy of the book is beautifully decorated. The key image is known as “Hours of the Virgin” illustrating the importance of the mother of Jesus Christ, who according to the Bible conceived her son as a virgin, after a revelation from God’s messenger, an angel called Gabriel. King Richard’s prayer book, includes a special section of prayers and devotions in honour of the Virgin Mary.

In the book’s centrepiece illustration, which was hand painted, Mary is portrayed as wearing a blue robe, a traditionally associated with her and suggesting purity, kneeling at a desk draped in scarlet. Her hands are held in a posture of prayer and she appears to have a prayer book open before her, all of which can be seen to suggest her piety and openness to the angel’s message. The angel Gabriel is also portrayed kneeling, and looking up towards Mary, a posture which points to the reverence due to her as well as her special vocation to become the mother of Christ. On her head Mary is wearing a wreath of flowers, which can be seen to allude to her traditional title of “Queen of Heaven”.

Alongside King Richard’s volume, the display will highlight a new Book of Hours featuring artwork and words of school children from dozens of Church schools from across Leicester and Leicestershire. “The new pictures and words reflect a modern view of the timeless spiritual themes of the original,” says David. A large leather-bound copy of this Modern Book of Hours is being produced by local publishers, Gartree Press, and will be on display in the Cathedral alongside its more ancient original. Standard size copies will also be produced for presentation to the participating schools and copies will be on sale to the public. 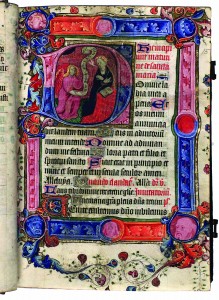 The Book of Hours will be just a part of a week of events which Leicester and Leicestershire are staging to mark the reinterment of King Richard. On Sunday 22 March 2015, his remains will be placed in a lead lined coffin at Leicester University. The cortege will then follow a route which reflects the King’s final journey. It will travel through the Leicestershire villages around the site of the Bosworth Battlefield Heritage Centre, before being brought to Leicester. At Bow Bridge the coffin will be transferred to a horse drawn hearse for a sombre procession through the city centre, before reaching Leicester Cathedral. There, the lead archaeologist Dr Richard Buckley will then transfer responsibility for the remains of the King to the Dean of Leicester.

The coffin will then lie in rest until Wednesday, covered with a magnificent, specially commissioned pall. The cloth will tell, in pictures, something of Richard’s personal story. The public will have the opportunity to visit and pay their respects.

The remains of the King will be reburied at a special service on 26 March. Overnight a magnificent new tomb will be erected which will be revealed at the final service of the week.

“I have sensed the hairs on the back of my neck stand as I have imagined the great events of March, especially as the very prayer book of King Richard is reunited with his remains 500 years after the battle. England’s past is catching up with us and Leicester is shaping the new history of our evolving community.”