Celebrating nineteen years since his first book deal in 1996 and with over fifty children’s books to his name including Dinosaurs After Dark and The Treasure of Captain Claw, it’s clear to see that Leicestershire born author Jonathan Emmett’s writing career has flourished.

Young readers are attracted by the colourful illustrations and entertaining stories portrayed in his books, as each book offers them a different journey, theme and story.

Whilst architecture may have been Jonathan’s initial passion, it is apparent that a career as a children’s author is what he was destined for. “I grew up in Enderby, just outside Leicester. I came to Nottingham in 1984 to study architecture and have lived here ever since. I began writing and illustrating children’s stories in my spare time while I was working as an architect.”

Reflecting back to his early days, the author recalls when he first discovered his passion for writing, “I first started to take writing seriously at junior school, thanks to a teacher called Miss Morphew. Creative writing was a weekly activity, but while other children wrote a new story each week, I wrote a new chapter of a long-running story.”

As a father of two children, Jonathan explains how important reading is as part of the growing up process, “Literacy is the key to wider academic achievement. Research shows that children who read regularly for pleasure are more likely to do well across the whole school curriculum. If one can engage a child’s enthusiasm for reading at an early age, they’ll have a head start for life.”

Engaging with a younger audience is no easy task, but Jonathan puts it down to his various styles of writing, “I don’t think I have a single writing style. Some of my books, such as Bringing Down the Moon, are meant to have a gentle, reassuring tone. Others, such as Pigs Might Fly are meant to be funny and exciting. I try to find the right style or “voice” to suit that particular story.”

It’s clear to see from his books that Jonathan has a creative imagination, but when he’s not writing or being a “paper engineer”, he likes to spend his time designing and making unusual furniture to provide storage for the family’s collection of board games and jigsaws. “Paper engineer” is a fancy title for a person who designs pop-up books. It’s the one bit of my current job that draws on the three-dimensional design skills I developed as an architect. Paper engineers are generally poorly paid and their skills are often unrecognised in comparison to authors and illustrators, but paper-engineering feeds a part of my creativity that writing doesn’t, which is why I like doing it.” 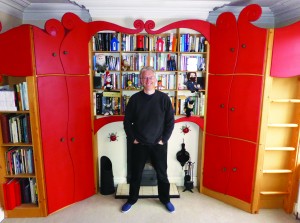 Having been recognised for his creative writing and illustrating work, he proudly shares a number of accolades to his name, “My books have won several awards both in the UK and abroad including the Red House Children’s Book Award for Pigs Might Fly, illustrated by Steve Cox, and the Sheffield Children’s Book Award for The Pig’s Knickers, illustrated by Vanessa Cabban. My most nominated book is The Princess and the Pig, illustrated by Poly Bernatene. Although the book only received one award nomination in the UK, it’s proved far more popular in the US, where it’s received 12 nominations and won 2 awards so far. For some reason the stories I write about pigs seem to be particularly popular with short-listing committees.”

Having carved out a successful career, Jonathan is set to release several books including A Spot of Bother, Danny Dreadnought Saves the World, and The Clockwork Dragon. “I’ve got three new picture books on my computer at different stages of development and am hoping to write follow-ups to the Clockwork Dragon and Silver Serpent Cup picture books that are coming out this year. And I’ve just agreed to write a very simple non-fiction book, outlining the history of computers to five year olds.”

To see one of Jonathan’s books come to life, you can catch the Topsy Turvy Theatre’s stage show of his picture book Ruby Flew Too! on Saturday 16th May 2015 at the Curve.