PUKAAR MAGAZINE SPEAKS TO SIMON LITTLE, HEAD OF PRODUCTION AT PUKAAR NEWS AS HE CELEBRATES FIVE YEARS WITH THE COMPANY. 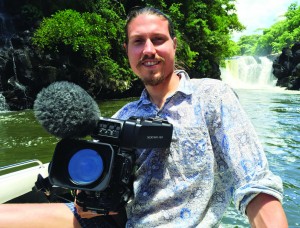 Recognised within the city as the Pukaar News cameraman with long hair and a distinctive moustache, Simon Little has seen the News agency grow from strength to strength, since the company was first established five years ago.

Having grown up in Grantham, Simon moved to Leicester in 2006 to embark upon a BSc in Media Production at De Montfort University.

Following his graduation, he struggled to find any jobs or gain any work experience in his chosen field, “It’s a problem faced by many young people who have left university and the trouble is the majority of employers want experience rather than qualifications.”

Simon found his lucky break in 2010, following an introduction to Romail Gulzar (Pukaar News Managing Director), who was looking for a cameraman and video editor. “I was thrown straight in at the deep end and straight away I was gaining experience in filming and editing on the job. The majority of work experience placements at other companies are a lot more restricted and usually involves sitting at a computer researching or archiving tapes, so it was great to get so involved straight away.” 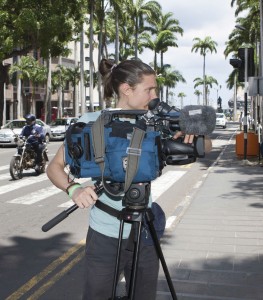 From humble beginnings, the company began with one camera, a laptop and a powerful vision to produce good quality local news.

“Along with Romail, I have put many hours into the company and focused a lot of my energy into Pukaar News, because we have a vision and something I believe in so strongly. I have neglected many parts of life for the good of the company and to see it grow and thrive in the way that it has really makes me feel proud.”

Having covered high profile news stories and filmed abroad in exotic places including Mauritius, Simon considers filming at the Houses of Parliament, Downing Street, the European Union and the Royal Albert Hall amongst his many memorable experiences, “I have grown so much working at Pukaar News, it has given me a focus in life and has shown me that hard work and following your dreams will pay off in the end. It has not been easy and at times I have wanted to give it all up, but if you want something bad enough you have to work hard for it. I feel like I am much more of a driven person because of the job and when I look back at the last five years I am shocked at how much I have changed.”

Looking ahead, Simon shares his vision for the future of the news organisation, “My plans for the future are to see the company continue to grow and thrive in much the same way that it has been doing for the past five years. I am excited and look forward to seeing where we will be in another five years.”