Pukaar Magazine catches up with renowned cinematographer Roger Pratt, who reveals what it was like to work on some major blockbuster films and how he felt when he returned to shoot in his hometown. 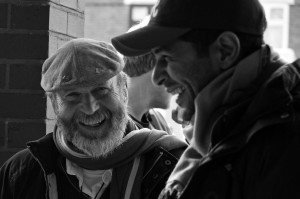 Leicester-born film professional Roger Pratt has worked on some huge Hollywood and British film projects, which include 102 Dalmatians, Chocolate, Troy and two of the Harry Potter films among many more. More recently he returned to Leicester to shoot for the film Jadoo, which will be releasing this March.

Speaking about the experience, he said: “I am from Leicester but haven’t been back for a long time so this was a chance to discover what has changed and how. Amit the director, who was not only from Leicester, but went to Loughborough Grammar School as I did, represented the newer side of the town and the Indian community here that is now one of the biggest in the country. I also visited my father’s old church, which is now a block of flats…so there are many changes.”

Roger grew up in Birstall and lived in Leicestershire during his early years before heading to Durham University and then the London Film School. Reminiscing about his childhood, he says: “As a small boy I watched my dad who was a vicar project films in his church. I sat by the noisy projector and wondered how live action appeared on the screen. I just knew I wanted to get into the film industry.”

During his time at Loughborough Grammar School, he managed to persuade the headmaster to let him make a film about the school, which is where he got his first hands on experience. Luckily while at university he managed to get a grant to go to the London Film School and got the opportunity to assist Mike Leigh on his first film, after the initially selected student turned down the offer.

When asked what a cinematographer actually does, Roger replied: “They are in charge of both the lighting department and the camera department. How much you have to do really depends on the people around you. If you have a very experienced gaffer like Tommy Finch, I would just describe what sort of lighting I am going for in a particular scene and they could achieve that. Some, like Terry Gilliam have a very clear idea of what they want and you just have to make that happen.”

Though he has arguably made his mark in the film industry, Roger jokes that his mum had always hoped he would get a ‘proper’ job. It’s no secret that it’s a tough industry to crack. “It is as cut throat as any other industry with lots of money at stake,” adds Roger. Offering advice to aspiring filmmakers, he says: “You need to know someone in it or get to know someone in it. It’s built on skill but how you progress is also based on the relationships you make with other people. You need to be keen and willing to do anything, make tea and always be there, ready, just in case.”

As mentioned previously, Roger has worked with some of the biggest names in the industry and some of the biggest films to hit the cinema screens. When asked in particular about his experiences working on Troy and Harry Potter, Roger said: “They were big. We had the inside of the town of Troy built in Malta and halfway around the world in Mexico we had the outside of the walls of Troy. Purely on literal size, Troy was a big film. Again with  Harry Potter I did number two and four and they were both such great experiences.”

But of course with the great experiences come the big challenges when creating such larger than life worlds. The cinematographer notes that he faced some tough challenges while working on Fisher King with Terry Gilliam. “I came upon a lot of difficult obstacles along the way,” he said.

“For instance, we walk into the Grand Central Station and Terry wants it lit for a ballroom dance scene. However, the first assistant director tells me that we have to shoot this day scene at night. The place is absolutely massive. I turned to my gaffer at the time, Jim Plannette, and he says I put a Moscow light down on 42nd street and that should do it. At the time I didn’t know what a Moscow light was, but they are massive lights used to light baseball stadiums.”

With a number of awards to his name and having worked in the industry for over four decades Roger has witnessed a number of changes over the years but he adds: “With the introduction and progression of digital what we can do has changed, but in the end they are just tools.”