Pukaar Magazine’s Ellis Di Cataldo sits down with Leicester born Actor and Writer Andy Nyman to discuss his hugely successful television and film career, making magic with Derren Brown and the severed head he keeps in a box at home.

Fresh back from Comic-Con 2013 in San Diego to promote the film Kick Ass 2, I met Andy Nyman at Leicester train station, a somewhat slight change of scenery but one that undoubtedly thrilled him just as much. 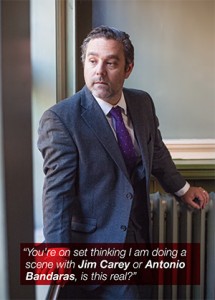 Clearly excited to be back in his home city, our interview took place in The Y Theatre which Andy hadn’t been to since 1981, when he was fifteen years old and took part in a Midland’s Shakespeare Competition; “I came second” he laughs, “I think the guy who came first now does Basil Brush.” Despite this early career disappointment, Andy pushed forward in his passions which led him to accumulate credits of actor, writer, director and member of the Inner Magic Circle.

Very much a Leicester lad, Andy attended Lancaster Boys School before going on to Melton Mowbray College to study drama. Growing up with his father’s dental practice close to the city centre and his mum still living here; he finds it a joy to come back, “I absolutely loved Leicester, I felt very at home being part of a nice city.” As one of three children, Andy thanks his “deeply happy childhood” as the reason to him becoming a successful actor. It was his family’s love of cinema and theatre which gave him the acting bug, “That was really a big part of home life. I just grew up absolutely loving it, obsessed with it. By the time I was twelve that was it; I knew that I wanted to act.” Andy soon started performing at a local stage school under the guidance of John Gillane, who helped him with audition pieces, which also led to the Midland’s Shakespeare Competition. “This is the first time I’d been back in this theatre since then, it’s so funny isn’t it, last time I was here this felt like the Palladium, it felt like 3000 seats and really, it’s just a sweet little theatre.” As a sense of nostalgia settles in the auditorium, Andy credits Leicester as being the starting point of it all, “It genuinely did allstart here and I used to do amateur dramatics at The Little Theatre, so Leicester all the way.”

From then on, Andy moved to London to attend the Guildhall School of Music and Drama before embarking upon a successful career in theatre and film. It was a starring role in Charlie Brooker’s Dead Set in 2008 which put Andy back on the television for the first time in ten years. As a huge horror fan, he was thrilled by the prospect of his head being ripped off by zombies but had one stipulation for the producer. “I told him I’ve got to have the head at the end of the shoot. So we did it and I’ve got the head, it sits at home in a rusty box in my study and every now and then we get it out.” 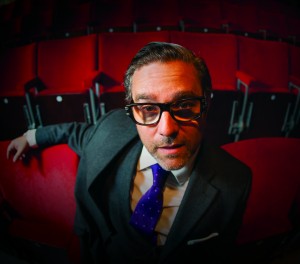 Forever keen to take on unique and interesting roles, Andy has created some of the most iconic characters within the shows he has starred. Channel 4’s 2009 sitcom Campus saw him portray the offensive and inherently bizarre university Vice Chancellor Jonty de Wolfe. “I always want to choose work that is brave and a little bit mad and Campus certainly was that.” With fearless scripts, the writers and producers actively encouraged Andy’s collaborative input which led to Jonty’s most infamous trademark, of breaking into different accents for no reason, being created. “It was during the pilot when I said I could do a sort of Caribbean accent and I did it for the writer, who loved it and that became one of his traits. I always wanted to keep up that it should never be safe, it should feel crazy.” Andy was on stage in the West End play Abigail’s Party, when Kick Ass 2 director Jeff Wadlow saw him sporting a big handlebar moustache and acting in a ferocious manner which he thought would be a good match for the one of the film’s villains, The Tumor. A month or so later he got the call to say he had been cast and soon began work filming in Toronto and at Pinewood Studios, opposite Jim Carey and Christopher Mintz-Plasse, in the sequel to the cult-adored 2010 film. “When that came through it was just a pinch yourself moment because it’s amazing to be part of something you already liked and is on a global scale. You get an email through of Kick Ass’ global opening day figures from every country in the world; it’s insane, very exciting.”

Having just wrapped shooting in Bulgaria with Antonio Bandaras and Dylan McDermot, Andy’s latest film Automata, due out in 2014, is a dystopian thriller set in the future. Astonished at the experiences he has undertaken due to acting, Andy is humble when recognising the huge names and huge films he has worked with, “You end up going to places that you just walk around thinking how am I here? How am I here in Sofia wandering around on my own on a day off? You’re on set thinking I am doing a scene with Jim Carey or Antonio Bandaras, is this real?” 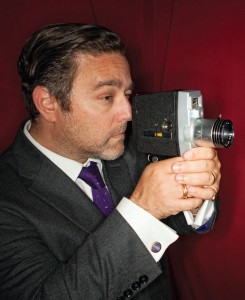 Alongside acting Andy holds another passion, this one stemming from a robbery at the old Woolco’s in Leicester which he heard about when he was a child. “There was a massive robbery and some guys drove up in the day with a big van, and they had white coats and a clipboard, went in ticked off bits and bobs, loaded washing machines and things into the van and gave it to somebody to sign for and they just walked out with it all; and I thought that that was so cool. That’s so brilliant to understand human behaviour that well and I found myself really drawn to that. There’s quite a clear line to con artistry and magic.” Thanks to his talents in Mentalism, Andy is one of the few hundred people in the world to have been inducted into the Inner Magic Circle in 2008.

A reluctance to star in his own Channel 4 magic show led to him collaborating with Derren Brown and writing some of the most mind-blowing magic in the world. Whilst Derren fronts the shows, both on stage and television, it is both of them who create the content, with Andy having co-written five out of six shows and numerous television programmes. When asked how they sit down and begin to write something like Mind Control Live or Enigma, Andy says “Derren and I sit in a room and do everything we can to avoid doing what we should be doing, we sit and giggle and mess about and we talk about what we like to say with the show, is there anything we feel really strongly about, anything we want to say? I tend to be a bull in a china shop, Derren’s more brilliantly diplomatic, and there have been a couple of times where we thought no we cannot say that. How outrageous, how strange can we go?” Their 2006 show Something Wicked This Way Comes won the Olivier Award for Best Entertainment, and once written it’s not the end of the story as Andy tells us “you’re constantly tinkering throughout the show, always little  changes and things to make it fresh and alive and real, otherwise it’s boring.”

In 2010 Andy added another string to his writing bow and burst onto the West End with his childhood friend and League of Gentlemen writer Jeremy Dyson, creating the dark and twisted stage show Ghost Stories. Ghost Stories is somewhat a dream come true for the writers as they both share a love for all things macabre, “One of the interesting things about horror is that people misunderstand it, it gets such a bad rap and horror is an art form, it’s a really remarkable thing. It’s about how you conduct yourself in life and possibly exaggerate what the repercussions can be.” 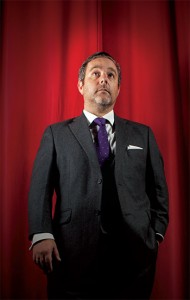 Shrouded in mystery, the show has broken box office records upon opening at the Liverpool Playhouse, and moving to the Lyric Hammersmith before touring from Moscow to Toronto. With over a quarter of a million people having seen the show, still no description or plot can be found anywhere as audience members are asked to keep the story a secret as not to ruin it for future viewers. “When we tried to get publicity initially and the press wanted scripts and photos of the set, we said no. People were not happy but we said just come and see it. If you give people a good enough time and a secret that’s worth keeping and ask them to keep it, they will.” Making a very welcome return to the West End in February, Ghost Stories is influenced by a little of everything from both Andy and Jeremy, “we dug very deep in ourselves, in stuff that genuinely scared us or we were ashamed of or felt passionately about.” In addition to his television and stage writing, Andy wrote a book in 2012 called The Golden Rules of Acting, by one who has seen, tried and done it all. The book is not just a great tool for aspiring performers but for freelancers in all creative industries; and was a chance for Andy to pass down his words of wisdom from a widely varied career within the business.

The next thing on Andy’s to-do list is to collaborate again with Jeremy and write a film version of Ghost Stories, before starting the promotion on Automata and undertaking “more and more interesting work.” With such a vibrant career pursuing things he loves it is obviously difficult for Andy to choose a highlight as he tells us that, “Being on a set, it’s a reward for pursuing your dreams, it’s a reward for the ups and downs of failing again and again; and that by no means is it the end of your failures, but a little landmark that says well done for failing so much. Going on to a film set makes me want to cry with joy, I cannot believe that’s how I make my living.” However it is not solely the glamour of filming and writing which excites him, “The truth is, the highlight is, really the fact I’ve sustained a career for 26 years. I’m married, got two kids, I’ve got a mortgage and I’ve done all of that, through doing what I adore doing.”