It’s hard not to stop and stare at the bright colours and bold brush strokes created by artist Tim Fowler.

The 32-year-old has been painting pretty much all his adult life and cites Jean-Michel Basquiat as inspiring him to become an artist:

“I didn’t realise being an artist was a job and there was a film on out about him but I’d never heard of him before and I saw him painting in his studio and thought ‘Wow that’s a job.’ ” 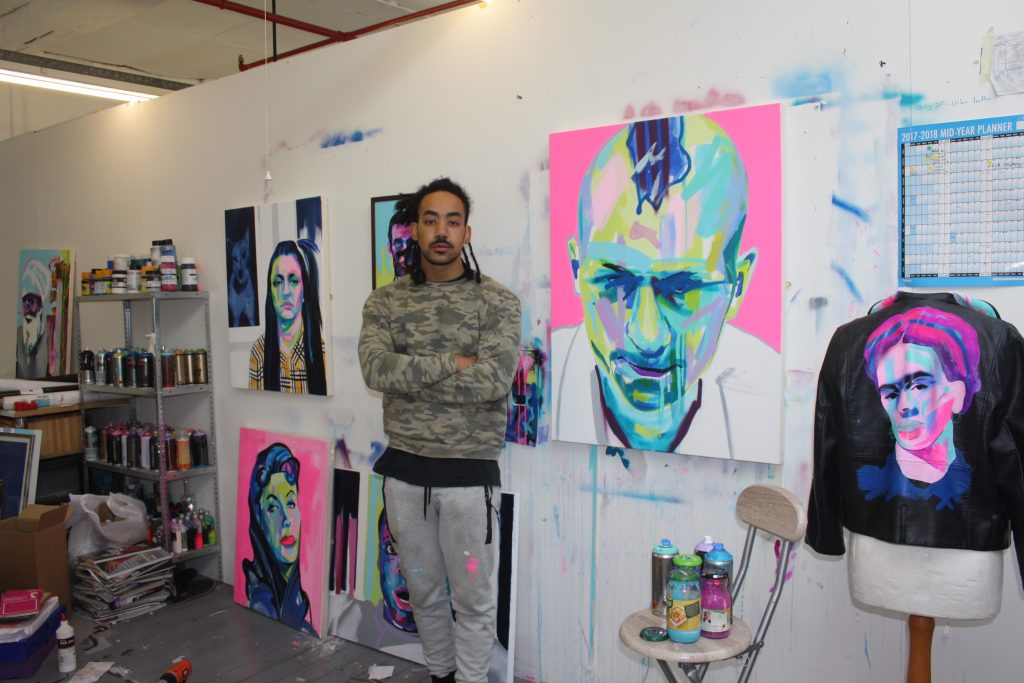 Born and raised in Leicester’s cosmopolitan Clarendon Park, the young artist took art GCSE and A Level but it was while studying art at De Montfort, that his passion really came alive.

“The first thing they tell you is to forget everything you learned at college and school. They try and rebuild your approach to it, try and loosen u up – I went into it with an open mind. That’s when I really fell in love with painting and they really push you to explore.”

Tim, who also works part-time as a behavioural teaching assistant at Millgate School, got a real confidence boost after he sold a piece of work on the opening night of his art degree show exhibition. Since then he’s never looked back and has kept on painting while also exhibiting his work and trying to spread his name.

Starting off as an architectural painter, his work now includes a series of silver screen Hollywood icons including Audrey Hepburn, Rita Hayworth and Grace Kelly in his trademark zany colours. He describes them as “slightly crude, rough and distorted” but they’ve been a big hit with art lovers:

“The work started selling up better and more galleries and new opportunities came my way. I liked the contrast between the old-fashioned black and white headshot photo and my modern colours merging the two together.”

The new year looks set to keep him busy. He’d like to start taking his own photos and setting up his own photo-shoots to create a bit more of a narrative for his work but will let that grow organically. Right now, he’s working on new pieces to take to his first ever exhibition in New York.

“People have always said your work will do well in America and I’m confident to go out there as an independent, representing myself.”

HAPPY 90th BIRTHDAY TO OUR QUEEN