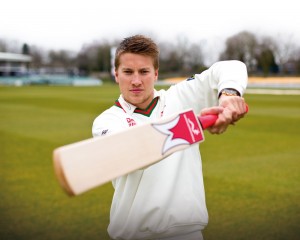 I caught up with Josh just days after his return from Bangladesh, where he was playing for the Dhaka Gladiators in the Bangladesh Premier League (BPL). He certainly had a grin on his face, and why wouldn’t he? Not only did his team clinch the trophy, but he was rubbing shoulders with top international players like Chris Gayle, Kieron Pollard, Tillakaratne Dilshan and the Beckham of Bangladesh – Shakib Al Hasan. From here on forward his aim is simple: to make sure that winning streak continues for his home club.

Speaking about his time out there, Josh said: “The Bangladeshi people absolutely love their cricket. They’re cricket mad! We’d get on to the team bus outside the hotel and there would be close to 1,000 people just standing there and cheering just as we got on the bus. That’s something you don’t experience every day in Leicester.”

The Leicester-born batsman (and occasional off-spinner) is now getting ready to captain his side for the forthcoming cricketing season and brings back a few words of wisdom from senior international players, which he hopes he can pass on to the lads here.

Despite only being 22, Josh already has a wealth of cricketing experience. He previously captained the Leicestershire Foxes in one- day cricket following the team’s Friends Life t20 exit in 2012 and also led the side in two LV=CC fixtures. In fact he was unbeaten in competitive fixtures while in charge and is hoping this will continue, now that he’s taken a permanent charge of the team.

There wasn’t even an ounce of nervousness in his voice as I questioned him about being captain. “I’ve enjoyed the captaincy,” he added. “We were winning a lot of games last year and will be starting afresh this year, but that too with a side that performed well towards the end of last year. Hopefully we can make improvements and start pushing towards the top of the group. So far it hasn’t been stressful because we keep winning, but I’ve heard rumours that it can turn you grey a lot earlier than you expected,” he joked.

Josh made his debut for the club at the age of 17 and has seen his game evolve dramatically. “It’s been an interesting cycle. I started off as a four-day player; quite boring and defensive and it worked for me, but I wasn’t playing one-day cricket. So I went away to Australia and worked on my game and the one-day side of things, and I came back a slogger. For me, last year was probably the first time I started to get the balance right between the two and hopefully this year I can kick on and do the same.”

Not only is he working on his batting consistency, but for him, developing as a bowler is very important. He added: “If you can add to the side in all three dimensions of the game then you’ve got a chance to play in any side.” 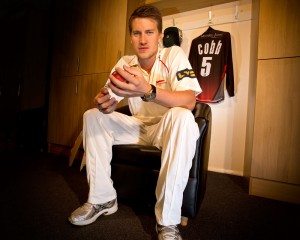 It’s fair to say that he’s already had his fair share of great cricketing moments, and speaking about some of those highlights, Josh said: “I think my third ever game was at Lords after I just came into the side. I scored 148 not out, so that’s right up there. Then two years ago we won the t20; my day started off with me getting a first-ball duck in the semi-final so that wasn’t great, but then I was man of the match in the final so that was a great feeling, going from low to high.”

It takes someone with a great deal of dedication and determination to succeed in a sporting career, and Josh’s passion is clearly evident. With his father Russell also playing for the club, he was introduced to the sport from a young age and spent a lot of time at the ground. “I’d be down here with the guys as a young lad bringing them water or doing anything I could to be around them. I’ve always had a bat or ball in my hand and always enjoyed playing some kind of sport. The whole family loves it, my uncle plays, my dad used to play. Both my grandpas loved coming to watch too.”

When it came to making a choice between education and sport, it was never really a tough decision. Although he completed schooling at Stafford Leys Primary School and South Charnwood High School, later going on to Bosworth College, his heart wasn’t in it. The sportsman admits that school was never really his forte and it wasn’t until he undertook a two-year cricket scholarship at Oakham School that he really enjoyed what he was doing. “My one ambition was to be a cricketer and so I guess education kind of took second place. Luckily it’s turned out alright so far, so it was the right thing for me to do,” said Josh.

Looking ahead to the next five years, he hopes that he will be pushing towards international honours and manages to cement himself as a permanent club captain for the Leicestershire Foxes, performing with a great side, competing for trophies in all formats. The batsman has of course already captained the England Sixes side in Hong Kong, made a double century for England under 19s and has played for the England development side at Old Trafford.

‘Obviously there are a lot of chances for the young lads at the minute but I think someone like Ian Bell who has been in and out of the England side has been playing particularly well. The way he plays is pretty class and if I could play anywhere close to how he’s playing at the minute I think I’d be doing pretty well.”

Although you may think it’s all fun and games playing cricket full time, there are a lot of challenges. Speaking about this, Josh said: “I think there’s a lot of people out there with the ability to pay sport in general, but I think to get on top of the mental side of things as a cricketer is quite tough. You have more bad days than good days so it’s mainly about trying to deal with them and obviously not getting ahead of yourself. It’s a lot tougher than people think, but it’s also very enjoyable and rewarding at the same time.”

Before leaving I asked him if he has any advice for aspiring cricketers, and he replied: “First and foremost you’ve just got to enjoy it and not take it too seriously, but also work hard at it and enjoy working hard – I think that will help you get the most out of it.”