While the hunt is on to find a proposal planner for one of Leicester’s wedding venues, Pukaar Magazine catches up with London-based Tiffany Wright who explains what the job actually involves and why she and her business partner Daisy Amodio have a 100 per cent success. 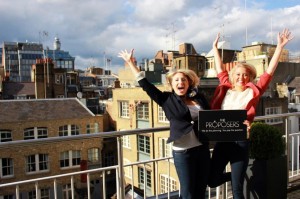 Nowadays you can pretty much find a planner for every aspect of your life, whether it be an event planner, mortgage planner or a nutritionist who can plan your diet right down to the last spoonful of milk. When it comes to proposing to your partner, which is potentially one of the most important moments in your life, why not get a little helping hand from someone who knows best?

Launched in April 2012, The Proposers help partners plan a spectacular proposal on any given budget for their other halves. Tiffany and Daisy decided to set up the business together after stumbling across a man who was setting up his very own proposal, on their walk home from work.

“It’s quite a sweet story actually,” added Tiffany. “This guy was in Hyde Park writing ‘make me the happiest man alive and marry me’ in little tea lights, but he’d spelt ‘happiest’ wrong. So, daisy and I just went up to him and said ‘oh look you’ve spelt it wrong’. We offered to take a couple of photos for the couple hiding behind the tree and at the end of the proposal he came up to us and said ‘my god you’ve literally saved my proposal – that would have been so embarrassing’.

“We went to the pub afterwards and were just sitting there wondering how many guys out there make silly mistakes and just need a helping hand. Women have wedding planners but guys don’t have anyone to help them with their proposals and that’s just as important. So, the idea was born and we’ve really been going from strength to strength.”

The Proposers charge £100 for their initial ideas package, which includes two bespoke proposal ideas for a couple based on their relationship. Everyone is asked to fill out a consultation form highlighting certain aspects of their relationship so The Propsers can ensure that each proposal is unique. The partner can then take away the ideas and put them together or he or she can ask for The Proposers help bring the idea to life. 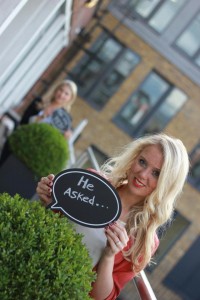 Speaking about a particular proposal they’ve got planned in the next two weeks, Tiffany said: “It’s going to be memorable because it’s our first flash mob. This guy’s girlfriend is going to be taken on the London Eye under the pretense that it’s just a great thing to do and the pod is going to be filled with singers who are suddenly going to start singing their song at the end, holding up a big sign saying ‘will you marry me?’, and then obviously he’ll get down on one knee.”

Other unique proposals included an art gallery themed one for a girl who was desperate to be an artist but didn’t have faith in her ability to draw. Her boyfriend really wanted to show her support, and so with The Proposers help he hired an art gallery in Richmond to create a gallery of happiness with lots of photos of things that made her happy. “For example she loved penguins and she loved Phantom of the Opera, so we made a photo of penguins holding the Phantom of the Opera tickets. There was a final canvas on an easel which was covered up with a piece of her own artwork with the words ‘will you marry me?’ written on top.  It was really personal and she absolutely loved it. They’ve kept the artwork and put it up in their house and are going to put it up around the marquee at the wedding,” Tiffany added.

Both of The Proposers have experienced that special moment, with Tiffany’s partner proposing to her on a romantic weekend away in Switzerland. “I got engaged in February (2012) so my husband managed to avoid the whole pressure thing,” she said. Daisy’s partner proposed to her in December 2012 in a romantic James Bond-style way.

Although the bulk of their proposals have been arranged for women on behalf of their male partners, Tiffany added that they are also getting enquiries from women. “We’re not telling you that you have to use a proposal planner. If you’re the type of person that wants to do something a bit special or haven’t got the confidence to do it yourself, then we’re here to help,” she said. 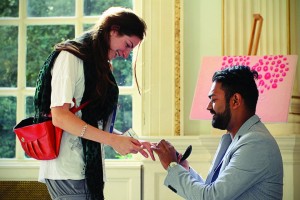 The City Rooms is now looking to bring such a service to Leicester and is searching for their very own proposal planner. Wedding Manager Kelly Doncaster said: “There are men and women who either know pretty much what they want their ideal proposal to their other half to be like, but often need just a little help to pull it all together. There are others who may need a little more help and a few ideas. There is so much focus now on not just the wedding and the ring but also on the proposal – it’s something the couple will remember forever and want it to be a special and unique to them as possible. The proposer planner will be on hand to help couples achieve this.”

Offering advice to the aspiring hopefuls, Tiffany added: “I don’t believe anyone can just go ahead and do it. You’ve got to be able to think outside the box and listen to people and understand what they really want.”

A Dragons’ Den-style interview process will take place to select the lucky candidate, however the hunt is also on to find a man or woman who would like help to propose to their other halves. For further information contact kelly@thecityrooms.co.uk