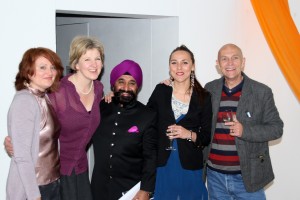 Passionate about promoting the city of Leicester across the country and the globe, this time Vic Sethi took a slightly different approach as he decided to back a debut art exhibition in Bristol, called Hybrid.

The exhibition, which took place between May 18 to June 2 at the Island venue in Bristol, showcased work from a diverse mix of artists from the South West who aimed to showcase the complexities of everyday life through their art.

The artists were finding it incredibly difficult to secure a sponsor and that was when they approached Vic, who was happy to help despite being a Leicester local and not from Bristol. The two Leicester-based companies Anand International and Daewoo International Europe came on board as official sponsors and speaking about the project, Vic said: “I decided to support them because I am passionate about helping people who are enthusiastic about their work but don’t know where to start.

“The great news for Leicester is that we have once again managed to promote the city through an event which is miles away.”

Featured artist Mandy Beall said: “In an industry such as fine art where support is constantly hard to come by, as emerging artists we have been truly grateful for Vic’s generosity. Vic was very impressed with the work, saying he would look forward to supporting us, and our work year on year. This was great news for us, especially coming from a person who is not local to Bristol, but it all the way from Leicester.”

Other artists who were exhibiting their work at the event included Gary O’Neil, Katarzyna Koch, Rebecca Turk Richards and Amanda Whittington. Through their practices of video, installation, painting and sculpture they explored their cultural surroundings and how these may be applied within a wider context.

Each of the artists were full of praise for Babu Anand, Jay Anand and Vic Sethi of Anand International and Daewoo International Europe for their ongoing support for the Hybrid mixed media exhibition.

Vic added: “I think no matter where you live, if you have the ability to support young and emerging talent, whether it be through financial means or something else, then you should go for it. These people are the future of our country and it is important that we nurture and develop the talent they have.”

A place for music fans to ‘Unwind’