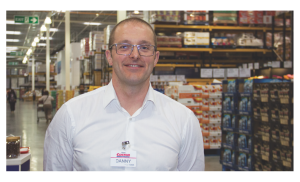 If you have been to Costco you will know that it is a completely different shopping experience to anything you have previously encountered. If you haven’t, this is the idea: a wholesaler that minimises costs by keeping things simple, essentially no-frills shopping with a wide range of products for buying in bulk.

There are 25 locations  across the UK, and its Leicester branch has been running for almost two years having opened for business in November  2012.  Stepping into the 144,0002  foot warehouse you are immediately blown away by the scale of everything, from the widescreen televisions to the gigantic jars of food products.

Danny Lang is the branch’s Warehouse Manager; something he never imagined when he began part-time at the Liverpool store  in 1995  after university, assuming it would be a stop-gap before his ‘proper’ career. However, nearly two decades later, having worked his way up via forklift driving and stacking shelves, he is now in charge of the smooth running of the superstore.

Mr Lang believes that even in the tough economic climate, chances for progression still exist at Costco: “I see a lot of people get promoted to senior roles who started out as grass root employees. We don’t necessarily  look for a 2:1 from a certain university; it’s all about aptitude and their ability to drive a business. It’s a great company to work for as we pay industry-leading wages and provide excellent benefits and working conditions.”

There are 126  employees in the Leicester branch, but more so than creating jobs, Costco seems concerned with saving customer’s money. Priding themselves on offering quality products at low prices, they have a members-only policy that brings a sense of exclusivity which Danny describes as “being part of a club.” 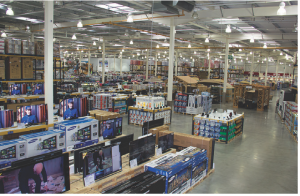 The annual membership fees, ranging from £20-£55, are where  they profit, because everything is sold at just over cost price. “We are a penny business and while we will never sell under cost, we strive to have absolute pricing authority in the market.

“We are set up to facilitate for small and medium organisations but we give opportunities for individuals to join, allowing people to buy products and services at prices that haven’t previously been offered outside the business community.”

When asked about the first couple of years in Leicester, Danny expressed: “It’s a new endeavour and it takes time but we are building a solid reputation and I think this area is going to be good for us.”

If the USA is anything to go by, where you can even take out a mortgage with the company, it might not be long until people are walking into Costco for their groceries and leaving with a new home!