As a creative writer, Jess Green has been writing poems for as long as she can remember. She says it’s the only thing she’s been any good at and used to write poems for her family, friends and even neighbours.

Growing up in a family of Labour party activists, it was only a matter of time before Jess was drawn to the political world and combined her love of poetry and politics. 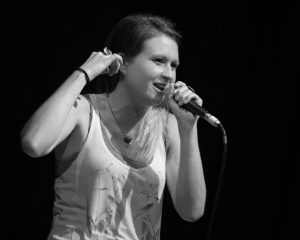 “I write about how politics and the decisions made up here affect people’s everyday life down here. Writing about it makes me feel better and I am drawing attention to those injustices that make me very cross.”

It was her poem to education secretary Michael Gove in 2014 that made her an internet sensation. She performed it first at The Donkey which was recorded and put online and within a few hours got 2000 views. Jess decided to film it again professionally and put it on YouTube and by the evening the video was trending on Twitter and had been watched by thousands more.

Entitled Mr Gove the poem was part of a show that the writer put together called Burning Books. She released a book featuring the poems from the show and it’s this work that has now been adapted for theatre. The play will be performed at Curve in October as part of Inside Out Festival.

“It’s been a huge amount of work. I had never written a full-length play so I had to teach myself how to write for theatre.”

Jess isn’t in the show and there will be no poetry. In fact, the first-time she’ll see it will be as part of the audience. Actors will bring to life the characters she has developed from the original poems.

“I have a poem which is all about a librarian who hates books and hates children and takes books to the tip, so in the play, she is one of the characters.”

So how did she come up with the characters?

There’s a slight pause. “I would say that a lot of them are based on people I have met. I am hoping enough water has gone under the bridge that I won’t get in trouble for it,” she says blushing.