Lord Willy Bach, speaks to Pukaar Magazine about his role as Police and Crime Commissioner and why he’s for local neighbourhood policing and how he hopes to tackle crime in the area.

Willy Bach has lived in the city and county for more than 40 years during which time he has had a high-profile career in criminal justice and public service. Last year, the Labour candidate was elected as Police and Crime Commissioner of Leicester, Leicestershire and Rutland.

One of the biggest challenges Willy has faced is dealing with the significant cuts to the local police force. Add that to the fact that Willy is also dealing with a rise in population and new crime including cybercrime and fraud, he’s got quite a big job ahead of him.

“The funding we have received from central government is so poor. It’s about 38% down on what it was nine years ago. We’ve lost 457 police officers and we now have one police officer for every 599 residents.

“My main concern is that unless central government is more generous with its funding for the police, a time will come when that really great connection there is with the people and police, will begin to just gradually disappear.” 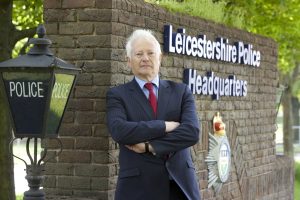 For this reason, the PCC is very supportive of neighbourhood policing. He wants to make the force more accessible so if something goes wrong, they are there to help and protect the public.

One of the ways he hopes to strengthen the link between the public and police is through his Police and Crime plan. The plan’s basic premise is prevention and revolves around Five Vs. Viable Partnerships, working with local authorities to share data. Visible Policing, making police more local again so they can respond to crime in an effective way. Victim Services, ensuring victims of crime are looked after and supported by the police. Vulnerability Protection, looking after people who are vulnerable and find themselves in crisis and Value for Money, focus on the most effective use of public funds.

There’s still a long way to go but Willy is tackling as much as he possibly can, including hidden crimes like domestic violence and hate crimes. He is also adamant to stamp out knife crime:

His plan seems to have gone down well with people and Willy sees it as one of his biggest steps forward as PCC. Willy’s role in office will end in 2020 and he is determined to make the city, county and Rutland as safe as he possibly can.