Pukaar magazine uncovers the story of Leicester’s forgotten son, Joseph Carey Merrick, better known to history and the world as The Elephant Man.

At Moat Community College, Maidstone Road, Leicester there is a plaque marking the spot where Joseph Carey Merrick lived and worked. The College stands on the site of the old Leicester Work House.  The fact that this building is mostly forgotten suggests that many people in Leicester still do not know about the true story of Merrick, otherwise known as The Elephant Man.

Born in 1862, Joseph first began to develop tumours on his face before his second birthday. His Mother, Mary Jane Merrick, died of pneumonia when he was just 11. He lived in the city where he was forced to go to the old Leicester Workhouse where he sold matches to earn his keep. His appearance was a source of great amusement for the children that would follow him from street to street, taunting him and calling him cruel names. His condition quickly worsened as cauliflower-like growths grew on his head and body. His right hand and forearm quickly became nothing more than a useless club. 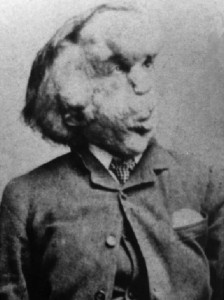 In later life, Joseph was mostly unemployed, destitute and stripped of all his self-worth by the ignorance of the people of the day.  Because he was prepared to take any job that would offer him money, as a last resort he took a job as a sideshow ‘freak’. These “freak shows”, where individuals with severe physical deformities would be paraded in front of the public were losing their popularity by the time Joseph took part. Still, he promoted himself  as “The Elephant Man”; the story was told  that his condition was the result of his mother  being knocked over by a wild Elephant at a circus she went to when she was pregnant with him. As Professor Robert Colls of De Montfort University states, “Life in the Leicester Workhouse was designed to be humiliating, but for Merrick it was worse because of his disability and the prejudiced attitude of Victorian society towards this.”

The entrepreneur Tom Norman took Merrick under his wing and treated him with great care after all, Joseph was his livelihood. In fact, the experience left him rather well off. He ended up making the sum of £200.  Surgeon Frederick Treves (later to become, Sir Frederick Treves) of the Whitechapel Hospital (now Royal London Hospital), came to hear of Merrick and paid him a visit. He privately viewed him at 123 Whitechapel Road. Treves expressed scientific interest in Merrick, presenting him before the London Pathological Society.

Joseph arrived back in England at London’s Liverpool Street railway station in June 1886. He had been earning a living in the only way he knew how, as a freak. Freak Shows had become outlawed in the UK by this time, so he worked across the Channel in Belgium. An Austrian showman, not connected with Tom Norman, robbed Joseph blind and left him destitute in Belgium. The police then found Dr. Treves’ business card in Joseph’s pocket.

Joseph was taken back to the London Hospital and sometime later plans were made to secure a final home for him. In those days hospitals had the policy to never offer their beds to ‘incurables’. However, through Treves’ work with Joseph, they had both become quite a celebrity. Philanthropists from every corner of Britain and Europe were writing in to the Whitechapel Hospital, offering all kinds assistance. He also received visits from the Princess of Wales as well as letters from Queen Victoria. In addition, large amounts of money were offered to look after Joseph.

The ground floor of the East Wing of the Hospital then became Joseph’s home. His friend Treves and accompanying nurses spent the happiest years of Joseph’s adult life caring for him. His small annexe in Bedstead Square was also adapted to his personal needs. The Chief Engineer, William Taylor, even built him a specially designed armchair.

But he was still unable to mingle in society because of his appearance. Even though he was self-educated, he had to rely mostly upon his imagination of social events and the outside world. Much of the time he was childlike, tending to look at the world in very simple ways. To while away the many hours at home, often alone, he found ways to put his wonderful imagination to use.

He constructed a card kit church of German origin. The film ‘The Elephant Man’ shows Joseph building it, basing it upon his restricted view of nearby St. Philips church. Joseph died on April 11th, 1890. The cause of death was suffocation. He was found lying down in his bed in order to perhaps sleep in a normal position and be just like other people in some way. He was 27 at the time. There was a small and very private ceremony for him in the hospital grounds.

Interest did not stop with his death. Soon after, plaster casts were taken of his body for scientific scrutiny. His skeleton is still on display at The London Hospital to this day. Samples were also taken and preserved in formaldehyde but they were destroyed during the Blitz. The amazing, sad story of Joseph was then rediscovered and presented for a new generation with the release of David Lynch’s film The Elephant Man in 1980. 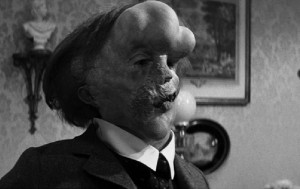 Although no one at the time could tell the exact nature of Joseph’s condition, new research has found that he was suffering from Proteus Syndrome. This is a congenital disorder that causes skin overgrowth and unusual bone growth often accompanied by large tumours over half of the body. It is named after the Greek God Proteus who could change his shape. The condition is so rare that only 120 people in the world today are known to have it.

What are we to make of the story of Joseph Carey Merrick? In 2004, Leicester City Council unveiled a plaque on the site of where he was exhibited as a freak. However, more recently, organisations like the Friends of Joseph Merrick have called for him to have a more visible memorial in the city so that his story can become more widely known than it is at the moment to the people of Leicester.

It is important to realise that Merrick did see himself as different and a curiosity but he also saw himself as a man and the equal of anyone else. It is perhaps a comment on our time that thanks to reality TV shows like Big Brother or The X-Factor we are still too eager to judge people’s character based on how they look on the outside rather than their inner qualities. Merrick knew this, and his poetry, much like his life, demonstrates a constant struggle to be accepted as a normal man who deserved to be treated with dignity.

‘Tis true my form is something odd, But blaming me is blaming God; Could I create myself anew I would not fail in pleasing you. If I could reach from pole to pole Or grasp the ocean with a span, I would be measured by the soul; The mind’s the standard of the man.’ – Taken from a poem used by Joseph Merrick to end his letters, adapted from “False Greatness” by Issac Watts.