A hidden gem in London’s gentrified Elephant and Castle is the Cinema Museum of London. Homed within the charming Victorian building situated in the old Lambeth Workhouse where Charlie Chaplin spent part of his childhood, the Cinema Museum is a unique place for both cinephiles and the public. It preserves a unique atmosphere and history of cinema-going of lost eras, with countless film memorabilia, which inevitably takes the visitors on a nostalgic journey back in time. 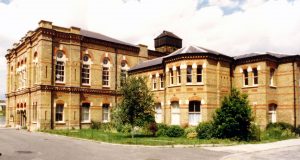 This historic site is home to multiple archives, a dreamland for collectors, and it preserves and exhibits the unique history of the cinema culture and cinema-going of mainly Britain and the US. From American promotional posters to British wooden cinema stalls, everything is covered by the patina of the past but continues to spark the imagination of many.

When I visited the cinema museum for the first time earlier this year, in search of specific material from one of their collections, I became aware of the untouched compilation of film posters, promotional glass slides and film booklets of Bollywood cinema, a testimony to its multicultural dimension and circulation in Britain in the 60s and 70s.

In order to start unravelling the multitude of un-catalogued and still boxed material and to commemorate India’s Independence, I decided to bring a little of this culture back to life, in Leicester. As a film scholar based within the CATH (Cinema and Television History) research centre at De Montfort University, I have joined forces with the Cinema Museum, to organise an exhibition entitled Restoring India, within the Heritage Centre at the University.

This exhibition of Indian film culture aims to connect with the historic notion of a rebuilt nation on one side, and on the other, exhibits decaying artefacts once used for the circulation and advertisement of Bollywood cinema in Britain. Restoring India will offer a unique window into the glittering world of Bollywood classics and will run from September to November 2017.

Only a little part of the collection is available as most of the Indian cinematic memorabilia needs restoration, preservation, cataloguing and digitization for accessibility to the wider public. Hence, the growing partnership between DMU and the Cinema Museum (now under threat due to the burgeoning residential market in London) is essential for such delicate and unique world film memorabilia to be conserved for posterity.

MY LIFE IN ART