READY TO DAZZLE LEICESTER AUDIENCES WITH A TALE OF IDENTITY AND STATUS, WE TALK TO SAMIR BHAMRA FOUNDER OF PHIZZICAL, TO DISCUSS HIS LATEST PRODUCTION ‘CYMBELINE’.

Of all the famous works by William Shakespeare, Cymbeline is one of the rarely performed romantic comedies. Written in 1611, the play is being revived by Phizzical’s artistic director Samir Bhamra for a national tour. When Samir began to re-imagine the text in a South Asian context, he discovered that Cymbeline was the third most popular play in India in the 1880s. Its popularity is evident at the British Library where three adaptations in Hindi and Tamil are housed dating back to 1895, 1912 and 1915. Samir wondered why this enchanting story about a father and daughter relationship was forgotten.

King Cymbeline raised Posthumus, an orphan who has fallen in love with his daughter Imogen. The lovers have defied the King’s law and have eloped. Cymbeline is furious and has banished his son-in-law.

Samir wondered why Cymbeline would oppose this union when he has raised Posthumus as a son.  Originally set in a mythic medieval time, the plot lends itself to a transposition to Indian cinema.  It reminded Samir of modern Bollywood films that have been entertaining audiences such as Kabhie Khushi Kabhi Gham and Veer Zaara. Samir goes on to question “Is it because Posthumus’  background is of a lower status or is it because of his religious denomination? In South Asian culture, marriage is not made in heaven, but rather decided by your caste, religion and bank balance.”

The story of Cymbeline resonates with people of all ages and walks of life, just like it did back in India in the 1880s.  In fact, Shakespeare’s works were translated by noble Indian literary artists and performed for Indian royalty. The Indian writers considered  his works as a sign of literary excellence  and his stories explored universal themes. They believed that by translating his works into India’s many regional languages, it could be accessible to communities  all over. 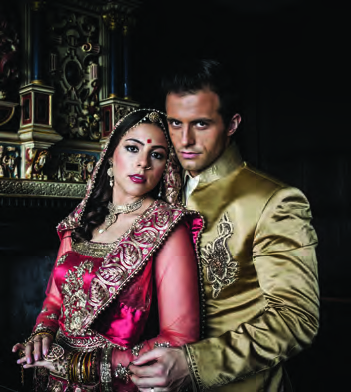 Bollywood fans and audiences of great epic stage productions can expect one of the most breath taking stories told in a vibrant and colourful style as music, costumes and dance make Cymbeline a fantastic theatrical experience.

The cast features Tony Hasnath, renowned for his performance in the theatrical tour of The Life of Pi and actor-singer-songwriters, Liz Jadav and Robby Khela who have written

Cymbeline opened at Coventry Belgrade in September and is currently on tour until 5 December. Tickets are now on sale to see the show, playing at Curve from 14 to 16 November.  Visit www.curveonline.co.uk for details on how to book.